This game didn’t have a site, so here is the GameSpot page.

My buddies over at Arpegi wanted me to review something different. Games I never really finished like SuperMan 64 came up. So, it’s obvious that they wanted me to review a bad game. I selected this “gem” instead. It’s a game I, tried, to play and never really 100% finished. Like I said in my Corpse Party impression article, I usually write about games when I’m completely finished them. But this game is different. On my old Dutch blog, I had simply a list of why this game was so terrible. But I am now going to give it a fair review. Let’s see if I wasn’t harsh on this game, I actually went ahead and replayed the game for as long as I could and then started writing this article. I’m rather curious how it’s going to turn out since my list of things I want to talk about has grown each part of the game. That can be a good and a bad thing since I didn’t tell if it were praises or complaints. One thing is for sure, it isn’t a good game, it’s not going to get many points. But like the Happy Video Game Nerd has a video series, how bad is it really? And is it worth playing it? Even if it’s only to see how bad it truly is.

So, what’s the game?

Alright, let’s dive right into this game. The first thing I have two men and… I already forgot what the game is about. The story is so generic that it isn’t even funny anymore.

The music sounds like a track of not even a minute looped over and over. The music sounds like something you created in a program where you can drap & drop samples into a timeline. Normally, I listen to the music while writing the article but this time, it couldn’t get me even in the mood to write or remember how to game played. It’s generic and forgettable.

So, I haven’t left the menu screen just yet. The font of the menu screen is terrible. When I’m on the menu where I can pick new game files, the word “game” looks almost like the replaced the letter G with an eight. Some letters are pretty close to each other and some letters like the “W” seem to take up more space than they should.

Plus, it wouldn’t surprise me that they didn’t play many games before this. Which game actually says, “Delete game file”? So, in other words, you can delete the game files from the menu screen? Well, that’s a very new and risky feature. I’ll be sure to try that out.

So, I skip something’s at the menu’s and dive right into the gameplay. One thing I can credit this game for, the game looks clean and inviting to play. They did a good job there. The music gets a little better but doesn’t sound catchy at all.

Plus, the names in the game are way too generic. Like the story. A random bad guy suddenly takes over the city or world, and after you have some minor plot holes, you are left with a confused mind after the introduction. I can understand that

this game might be based on a cartoon series or a comic book show, but they then leave the guys who don’t follow it in the dark and confused. 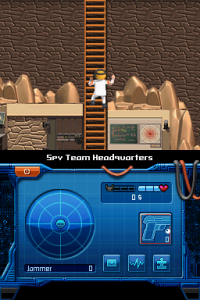 After the opening you get an extremely long introduction to the story. And like you would expect, the story is extremely generic. It’s a kids game, I can forgive it, but it’s extremely forgettable. Wait, I actually take something back. A kids game can have a pretty memorable story. If you take of the Nintendo games and look at the games that are targeted towards kids, you can clearly see that the story is rather interesting.

I went through the effort to make this screenshot myself. This clearly shows the Q&A (word for quality testing) that this game lacks. The animation goes down in my eyes since you don’t climb up the ladder correctly. And here is the thing, it’s the very first ladder you meet in the game.

I forgot to actually mention that you need to press select after each dialogue/cut scene. And I had and actually have still trouble adjusting to that.

I touched on this before, but the names don’t improve this game. “Jet Girl” and “Agent SPY” are two prime examples of this.

I have to give this game also some positive feedback, the game’s controls actually do work. And the game does what’s supposed to do. But let’s go further into the game and let’s see if it gets any better, or worse.

On my previous blog I didn’t give this game a full review like I’m doing now. And I want to correct that with this review. I often play games that aren’t targeted to my age or my style but when I got to the part where I needed to hit the road, I gave up.

I’m truly patient with games and I like to give them a fair chance, but this game truly lost me at the driving part. The drivers ride all over the place, and they can’t turn at the road at all. It almost seems like the game’s animation is based on a grid and made, and then the levels are designed. Sadly enough, this makes things break when a level is changed.

Also, I don’t get why on so many places you need to be reminded of the current date & time. That’s a truly “helpful” feature. It’s almost like they put this feature in so that the kids have no excuse anymore when it’s time to stop playing and go to bed.

I also don’t like how the game asks your language every time you start. This is similar to how you don’t have buttons to not have to press the select button after the 2nd or 3rd time you have to. Genius!

But back to the driving. It simply doesn’t work solid enough. Textures can glitch in each other, cars can ride in each other. Your radar/ map isn’t clear, and the controls truly are messed up and unresponsive at times. Also, the game got a lot uglier at these parts, and it looks pixelated as if this game was for MS-DOS. What I’m trying to get to is that this game doesn’t look sharp in these sections.

And at this part I started to lose interest. I remember from the first time I played this game that this is actually a couple of mini-games. And judging that you can select these from the main menu, the game must be a “blast to play”. Since this gives me the impression that the game is rather short. Well, time for the conclusion.

+ The game controls work in the non-driving sections.

I played a lot of Playmobil when I was young, and I got excited when I saw this game. And oh boy, do I regret this buying impulse that I sold this game. I normally don’t get rid of games, but this game was way too terrible to play.

This game lost my interest extremely fast. I have read some other reviewers talk about this game being fun for kids, but if you are a kid or a parent, I don’t advise this game at all. There are way better games to play that are way more fun and will be less frustrating than this one. The Nintendo DS library is big, but this is one of the games that is a mold on the game library.

Don’t buy this game, it’s awful and doesn’t deserve any positive attention. I might be very harsh here, but this game is one of the worst games I have actually played without seeing it in a TOP 10 list.