Link to the entry on the Assassin’s Creed wiki.

Well, what’s going on here? NekoJonez reviewing while he is at a friends place? It’s true since my good buddy Blindshot is a big fan of this series. We started discussing about games and I talked about my first review here, Tomb Raider. I saw it on the XBOX360 and it’s surely different. But now I give him the chance to review a game. He isn’t good at writing but I wrote the review, yet he provided me with the material. A fun writing challenge too. So, this game series has been on my to play list for such a long while. Yet, the stealthy gameplay is keeping me off since I am not that good in these types of games. I remember the sneaky part in Tomb  Raider, I was stuck there for quite a while since I can’t get passed the guards unnoticed. Long live “balls to the walls action” baby. So, now it’s time to review the 3rd game in the series. Are we going to rip it a new one? Or, the other possibility, give it some (more) praise. Let’s find out with this review. With the help of Blindshot. In this review, he tried to describe me the things without spoiling me too much since I want to play this game without spoilers. 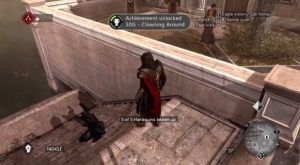 The piece of Eden. Again a quest to get this artifact. Just like in some previous entries of the series. In this game it’s time to win it back. Like in one of my favorite game series, Broken Sword, those Templars are at it again. They are trying to take over the world. Unlike Broken Sword, they don’t try to get our asses burned with a giant dragon. Thankfully.

The pacing of the story is bad, wait no I meant good. Well, actually it’s at your own pace. You can start the missions whenever you feel like it. So, you can make the game linger as much as you want or go speedrunning it.

The story is accompanied by a nice looking world. The world is very detailed and a fun place to explore. But we shall dive deeper into the gameplay later. Everything is made with great attention to detail and draws you into the game even more. But the animation has a few flaws. Like ropes disappearing and the hay thingies are lacking the fine attention to detail then the looks of the game. But that’s the only thing we could find to sad bad about it. The murders and other animated jazz is done pretty well.

In almost every mission, you have different ways to reach your goal. The level design is very good. But Blindshot told me that he had some issues with the camera where his guy didn’t do what he wanted. Like trees that disappear. Oh jolly good fun. The level design is pretty realistic since the developers went on location to create this game. 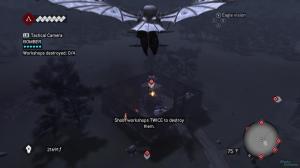 The controls didn’t change from the first and second entry in the series. So, playing with this set of controls is extremely easy. Well, not meant that the game is easy. Nothing feels stiff or stuck. Taunting enemies is something Blindshot enjoys. But how is the difficulty of the game?

The game has an inconsistent difficulty. And this game takes the difficulty to a whole new level. It goes from difficult to less difficult. Of course this is the story but that’s a given. Blindshot told me that there are parts where the guards are super mega extremely attentive and other times you can just murder them in front of their face. This makes for confusing moments. Like some types of guards don’t do a thing when the see you running on the walls.

Some missions are nearly impossible to complete. For getting that lovely 100% mark that is. Thanks to the locations being to crowded or other things like that. And this might piss off several gamers who try to get all the 100% in every case.

The game got shorter then the previous entries. The game isn’t extremely lengthy. Blindshot thinks that the gameplay for the main story gives you 30 hours. But thanks to the various side missions and other unlockables the game suddenly makes worth for your money and might give you a 50-ish hour game.

In the game there is a big variation. The game won’t get you bored easily. And thank god, the tutorials are free to follow. You can even disable them. This gives a nice welcoming door for new players. The gameworld is rather large but there is fast travel which takes out the boring parts of traveling the whole way. And the game saves often enough to not give you a big setback.

The music is super. The composer of the music, Jesper Kyd, made an amazing soundtrack. On each occasion there is another track. this really keeps you into the game and makes the game that more satisfying to play.  And the music isn’t stopped just like that. It goes gently from one track to the next. The sound design is extremely well done. There is no delay. But there is an issue with the hidden blades and the sounds. It sounds, wrong. 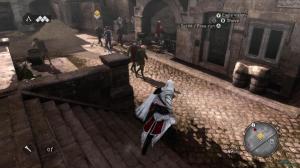 This game has a few flaws. Things like jumping into hay from many meters high and having not that much damage takes a way from a lot of the realism of the game. Like not being able to get stuck with the parachute.

Blindshot was also not pleased with the addition of the parachute. It takes a way a lot of fun he said.

The game gets easier thanks to the crossbow. Too easy since killing the guards and targets becomes just a breeze.

The death animations are slow, much too slow. Mostly on roofs. They are mostly like dolls and the animation is not there. Also when they hit the ground, then the animation starts.

And we are going to leave it here. Of course this game has a lot more to offer but we can’t talk about it all.

– Animation is flawed in some parts.

– There are some bugs.

We might not have completely gone in depth about the gameplay but this game is a nice title in your collection. It’s accessible for you new comers but also great for you veteran players. Compared to the previous games is it a good step up. It’s a lot better then the previous entries but it is still not perfect.

It’s an extremely enjoyable game to play, while you overlook the flaws.