While doing research for this game I found something extremely odd. The official release of this game is 18+ yet the limited edition is 16+. Oh well, that’s the least of my concern. I don’t remember writing this first impression, yet it suddenly appeared on my blog. Alright, strange. Now something similar happened to me like to Alan. But thankfully I published some content on a blog that wouldn’t harm me as much as it did to Alan. He ran through the dark woods. Seeing a shack with a computer. On there, he bought a game for a friend of his on Steam. In return, he was allowed to choose out of a few games out of the inventory of that friend. He choose the Alan Wake Franchise since that was the game that interests him. (Personal note: that’s how I got this gem :3 ). Yet the nightmare started there. Scary things beyond his imagination started happening. He wasn’t able to finish a book in a long time. That poor writer. He felt he deserved a break and he set out to have a vacation. When his wife betrays that vacation and actually had a plan to get him back to writing, a kidnap happened. And it actually gets worse from there on out. (Feel free to leave a comment about your views of this game and/or your opinion of this “review”) 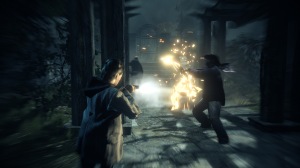 Out of the introduction you get the idea to where I wanted to go with this first impression. I actually wrote this first impression again since I actually found that it was too forced. This game is all about Alan’s latest horror book coming to live. Yet, he doesn’t remember writing it. He often sees visions of him writing it and talking insane. This all happens while he is looking for his wife.

If that doesn’t sound creepy already, well then just start playing the game. Only one or two games made me actually nearly “piss my pants.” One great example is Corpse Party. But this game just did it before I wrote this article again.

I normally talk about the story first in my reviews and first impressions. And I have to applaud the presentation of the story here. During the play, you find pages of the manuscript of the story Alan was working on. This hides information like character backstory or things that happen or even happened. This sounds already like a nice set-up for a creepypasta. But the thought of you writing the future yet not being able to control it is scary.

The story is amazing. It might get a bit confusing since it uses a certain way of making it thrilling that not many people like. It doesn’t explain a lot. But seeing that this game is heavily story based, does that destroy the replay value? Lucky us, no. You can replay the game on the highest difficulty to gain access to some parts of the manuscript which rewards players that go for the hardest of the hardest. 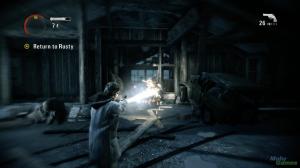 While playing this game, I got a vibe from a game. The gameplay felt a little bit like the latest Tomb Raider. Yet, this game is extremely far from it. But both games give off a similar survival and creepiness factor.

So, the story is extremely well done with rich and deep characters, what else does make this game worth it? I must have my reasons to back this claim up. I don’t post just for the fun on my Facebook wall that this is one of my favorite games on PC.

The graphical presentation of this game is just pitch perfect. Details everywhere. Crows that fly around, shaking screens, barely visible traps… The game is creepy when it’s supposed to be and the transition is seamless.

I heard a lot of complaints about the animation on several forums. Yet, I actually disagree. I think the mood of this game and it’s animation is well done. There were only two things that bothered me. One thing is the, according to the developer unfixable, bug at the start on the boat where the scene starts shaking if you have auto aiming on. (Which is an extremely big help by the way). And the second thing is how the animals in this game doesn’t look as smoothly created as the humans.

I have actually one complaint with this game. I don’t really get into it’s soundtrack. The sound design is extremely well done. And it aids a lot when you play this game with a headset that supports good stereo sound. The further you go, the more faint voices become. But the music in some places is so cheesy I just wanted to finish and leave the area.

Okay, I might have yet one other complaint. And that’s how this game uses one or two jump scares. It made me jump. And in my opinion that’s cheap. Good horror shouldn’t relay on jump scares. I don’t see a monster waiting in the bushes thinking to him or herself: “Let’s wait for a second and jump in front of him and roar a bit and then attack.” Nah, it’s too cheap. And that is actually addressed in this game. The camera often zooms out when enemies are behind your back and you are at low health.

Adventure fans like myself will have to get used to some things like automatic opening doors and the jump being actually human. Yes, don’t expect being able to jump to ledges higher then you can in real life. This adds to the game an awful lot. This makes me think big time.

So, I haven’t finished talking about this game but I’m running out of time in this first impression. I try to keep these article around 1000 words to have a quick read if you are interested in the game. So, this means that for my opinion on the gameplay, length, difficulty, controls and voice work you’ll have to wait for my full review. So, thanks for reading and I hope to catch you with my next article. I’m going back to Alan, helping him finish his journey. I have spare pants ready neko’s. Don’t you worry!