After my anger towards Capcom for not releasing Ace Attorney: Miles Edgeworth Investegations 2 on the DS, I finally got my hands on a new official Ace Attorney game. And this in brand new 3D! Pokémon Y has to wait, I have a client to defend. Yes, you read it correctly, I choose a 3rd party game over an official Nintendo game. But don’t worry, I’ll write my review of Pokemon X & Y soon. Anyways, this game is excellent. And this article is meant to convince you even more to download and play it. It’s cheap, extremely cheap in fact. You pay half of the price you would pay for a normal Ace Attorney game. So before I start this first impression, I’m at the start of the 3rd case. That’s the mid-way point. If you take that all cases are of the same length. Yet, comparing it to previous installments, the later the case, the longer it is. Anyways, in the Ace Attorney series you play as an attorney or a prosecutor in the spin-off Miles Edgeworth: Investigations. Your goal is to search crime scenes, question suspects to get enough evidence to be able to defend your client against everything the prosecution throws at you in court. It’s a visual novel adventure game, and it’s a hidden gem series to be honest. So, before I continue, let me know in the comments what you think of this game and/or this review. Anyways, let’s start! 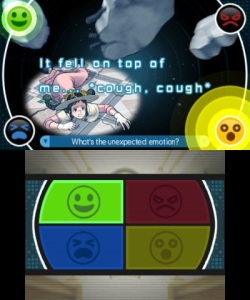 For real, Phoenix Wright is back in full force. In one of the previous installments we learned that Phoenix Wright actually stopped being a lawyer. If you play Apollo Justice, you’ll learn why. I won’t spoil anything here. But one thing is clear, this game is filled with references to anime’s and older Ace Attorney games. Yet, you don’t need to have played the previous installments to enjoy the extremely well done writing.

The writing is funny at time and makes for a great laugh. The characters are memorable and well done. They are believable and are a great addition to the great cast of characters. I’m a bit bummed out that some characters won’t appear in this new installment, yet I might speak before my turn. (And an objection will be raised in my face).

And not only the extremely well done writing is back, it’s now presented in an extremely better way. Gone are the days you skipped over text, you can now scroll back in the dialogues. A long awaited addition. Thanks for finally adding this. I’ll directly mention the extremely handy fact that the save feature is better implemented. Now you have a button to save on the touch screen and wait… what’s this? Two save slots?! Yes, you have two locations to save your progress. And it saves extremely fast! That’s neat.

Anyways, back to the story part. This time around, some parts of the story are presented with anime cut-scenes and they look brilliant. I love when one comes on and the voice acting is how it should be! Well done and on the spot good. I love how you now hear more of the voices of the characters outside the “objection” and “hold it” phrases. All in all, the story and it’s presentation is top notch. 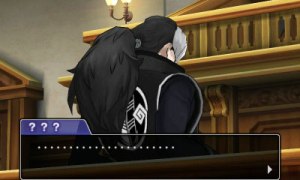 Besides the story, the game got a graphical update that blew me off my socks. It’s a game where I don’t mind having the 3D slider on. It’s visuals look sharper and pop out even more with the 3D. The art style is what the series needed all along.

This game is a visual eye candy for anime games. The animation is superb. I like how some locations look alive when you come to them, like flags blowing in the wind and various other details. It makes the game have more immersion.

The UI (= User Interface) got an upgrade as well. It controls a lot smoother and it’s how it should be all along.

The character animation itself is just a tip of the mountain of amazing design that this game has. The fact that this game looks more realistic like seeing the crowd behind the defendant makes the scene much more alive. The camera often zooms out to show a view of the whole court room and when you have the 3D slider on, this game blows you away.

The gameplay just got some neat tweaks as well. Your partner will tell when you have everything at a certain location and that makes getting stuck a lot less frequent. Also, the notes that Apollo uses makes for a great check list if you may get stuck. You also can call in help of your partner who’ll say which statement is the one you’ll need to present evidence on when you failed several times in the cross examination.

Is there something bad? 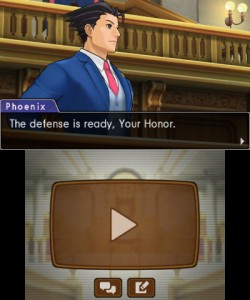 Of course, I’ll continue to praise this game. But there is one thing that I dislike. The fact that there might be future DLC. Why Capcom, why? -Sigh- If this is the only bad thing about this game, I can let it slip.

I already explained how everything got better compared to the previous entries and it really is that way. The better UI, nicer visuals, improved animation, anime cut-scenes… I can’t get enough of this game. My college work might suffer if this game continues to be this good. So yeah, I might need to give my 3DS to someone so I can still concentrate on my college work.

This game’s price is a steal. It’s only 25€. Just wanted to mention that.

Also, some old elements with Apollo return from his installment. Yet, the new mood matrix gameplay, which I didn’t have the luck to play around with it often, is extremely interesting. It provides a new and refreshing element for the new and veteran players.

In terms of length, this game is pretty lengthy, yet I’m hoping that the 3rd, 4th and 5th case keep me playing for a long time. Since this game has been released 3-4 days ago and I would love it if this game lasted me more then a week or two. Oh well, if you play on a game as often as I do on this game, I can’t be helped I guess.

So, that’s going to be it for this first impression. Thanks for reading and I hope you enjoyed it. Give this game a chance and you’ll understand why this game is worth it’s purchase. Now, I’m going to sit down and continue to play this wonderful gem of a game.