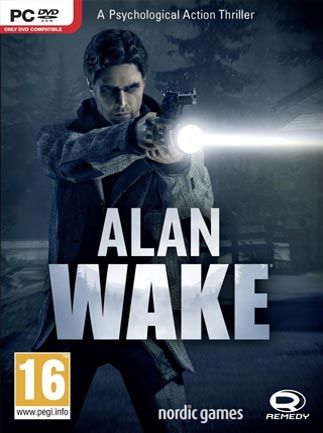 You would have thought that I would write my 15th game review on my blog. Yet, I decided to write it here on ButtonSmashers. Why? Well, to thank the guys for the great times they gave me and because Q gives me sometimes some free games and I think that means I need to pay him back somehow. So, I write an article on one of the best horror/adventure PC games ever made, well in the recent years. Besides, for me it’s all about reaching the milestone instead of the location. Another reason why I write it on my friends blog here is that I actually got this game for free from somebody of Arpegi. And my first impression is already on my blog. So yeah. If you want to read my first impression of this game, you can do that here. Anyways, unlike Alan here, I’m not in the dark. My dark, well black, cat is sleeping in my arms, making the time I spent on this review a lot longer then I originally planned. Oh well, the two additional collector edition episodes will have to wait. I have a game to review. In my introduction I always make it clear how I got to this game. Well, I got this game as a present. I was allowed to choose between three titles for buying someone a game. I knew the title Alan Wake from seeing it on a YouTube channel called Lazy Game Reviews. I wanted to link his video but the highly trained monkey’s of Google failed to work. (Yeah, YouTube has been bugging out for me. So, after some 500 error’s I gave up.) Anyways, enough stalling of this! Let’s get on with the review. Nothing special for the 15th, just a plain old review. And my plain old invite for you to write a comment what you think about this game and/or review. 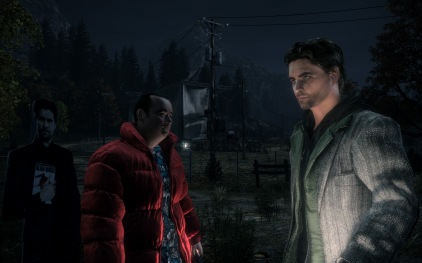 This game blew me out of the water. One of it’s many stronger points is the writing. It’s just an amazing story. Don’t go spoiling yourself because the ending is somewhat open ended and ready for a sequel. Yet, I haven’t finished the additional DLC’s yet. So, maybe I get my answers there.

I actually bought myself the novel version of this game. And I’m pumped to read it. I can feel Wake’s pain. He’s a writer who lost inspiration. Sometimes I have that myself. But apart from a story with deep and rich characters, it’s extremely memorable. It makes a lot of twists and turns. Even Alan starts to doubt himself from time to time. It feels more human.

The presentation of the story is what made this game for me. What’s going to happen in the (near) future of a chapter is written out on manuscript pages, some are extremely well hidden. Some provide backstory to the characters. While the pages play a very important role in the game, it’s implementation is just brilliant and how it should be.

I’m so sad that I finished this awesome story and this is one that I wished I could play over and over again without knowing the story. Where is that reset button in your brain when you need it?

Well, let’s talk about this game’s gameplay. And is it something where many game developers can learn from. You play the role of Alan Wake, like I told earlier, a writer who is in trouble. This game is a mostly linear adventure game, at some moments there are two or more paths, and it’s a shooter as well. But with a big twist. Before you can hurt your enemies, you must shine your flashlight on them. I only wish that not all enemies where male. But this is such an extremely big nitpick.

In the game you use several weapons. A pistol, shotgun and a flare gun. You sometimes have flares and flash bangs at your disposal. And when you explore you can have more ammo as your reward. The additional batteries I found for my flashlight came in extremely helpful.

Yet with this comes on of my few complaints with the game. The weapon selection is not that great. When you play it, you will understand me better. But it’s as simple as putting everything under the scroll wheel. So when you wish to switch your flash bangs to flares without switching your weapon, well though luck.

And your objective is nearly always the same. Go from point A to B. Yet, the journey is always extremely different. From fighting through ambushes to driving a car to an other location, the game never feels really repetitive. This game also haves some major horror mixed in. From being in the woods with a lot of bear traps and the Taken following you to being in a hospital that is consumed by darkness.

I also love how the creators of this game hid several QR codes to scan in the game. I uncovered some GIFs with it. I’m so curious with I’ll find on my second playthrough. Yes, you read it correctly, I’ll probably play through this game more then once. Not only since the highest difficulty provides all pages to find but also because of several paths I didn’t explore and I wish I did.

One other complaint I have is that the driving is a bit broken. It’s too loose. You sometimes feel like you’re riding on ice. And with sudden tight corners in the road, this game makes the driving not so easy. Plus, your car can break down. Excellent, yet a damage meter is nowhere to be seen.

While the ammo for your weapons is extremely scare, you’ll never be without bullets. If you don’t waste them that is. With a human jump and a limited sprint, this gameplay can’t be any more talked about I guess. On to the next segment! Like in the game. It’s also in parts. And when you reach the next part, a quick recap plays. This makes being up to speed with the story such an easy task.

Let’s first talk about this game’s soundtrack. I like almost every track. Some songs at the end aren’t really my style but I won’t talk bad on the game because of this. The set the mood like it should. The music gets tense when it needs to. And the music gets lighthearted when there is drama.

And the sound design is how I think it should be in all games of this genre. All weapons are such a blast to use because of this. Except, I miss a bit of a ticking sound for the flash bang. But that’s the only change I would do in the sound department.

And does this game gets tense. A full 100% yes please! The further you go, the more I got on the edge of my seat. This game provides a lot of challenge. One or two parts where a bit unfair but hey, that I can let slip.

The level design is excellent. I never really felt stuck and it was always clear in which direction I should head. Thanks to the ability to press “F” to focus on the part Alan was talking about makes that you have more control in your hands and that’s something I can only applaud. The only thin I should have dropped was the clicking to start an engine for light. One time it got a bit too difficult to remain fun.

Oh, now I suddenly remember that I should have mentioned in the gameplay section that there are various additional collectibles to find. Well, now that I mention it here, I can say that this games it’s length is great. I have beaten it on normal difficulty in 18 hours. Yet, I know that I skipped some parts and I haven’t finished the DLC. And I truly look forward to beat this game again with the developer commentary playing in my headset. Yeah, I advice you that you play this game with a headset, it makes the experience a lot better.

There are also parts in the game that you play with a side kick. And it’s AI is great. I had moments where I really was saved by the AI. And there where moments where the enemies really took me off guard. And I like how the animation helps you see enemies swarm you from different directions. This makes the possibility of cheap deaths go down so much. But before we talk about that, I want to say that I had to try some parts several times. Not because of cheap things but because I was truly taken off guard or I took the situation on with a wrong weapon. The bosses really require that you use the tactics of the weapons and ammo that you have.

So to finish this review, I’ll talk about the visuals and animation. And wow, the visuals are just mind blowing. The excellent voice work really shines through here. With nice and extremely well done locations, it’s a joy to walk around in this game’s setting. Nothing feels out of place and the developer really made it in such a way that this game might be real as well. The character’s detail is also well done.

I also like how you get a nice death animation when you kill the last enemy of the attacking group or when you die. The animation might have a hiccup here and there, it’s not really noticeable when you don’t pay attention to it or when you don’t look at it with a reviewer’s eye.

So, let’s wrap up this special longer review here and let’s get right to my conclusion, shall we?

– The driving is a tad bit broken. A damage indicator and improved driving would be welcome.

– The switching of weapons isn’t the easiest thing to do.

When even MiseryLC talks about this game, you may be sure it’s quality content. He didn’t play this game, he only saw a let’s play of the sequel. And I agree with my statement there. This game is a mindblowing experience. One that every one should play that likes adventure and horror games.

The presentation is unique. In terms of visuals and the story. It’s different yet familiar. It’s really worth to check this game out on Steam and play it right now.

I truly had trouble looking for negative parts of this game. This is one gem that should be high on everybody’s list. And it’s even a port from a XBOX360 game. Take that, a well made port.

Play this game, you won’t regret it.