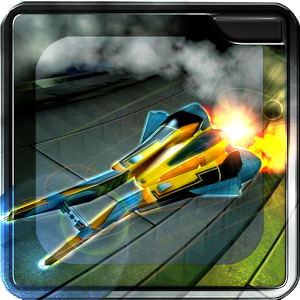 So, I got the honor of the developer actually mailing me to review his Android game. It made me speechless for some time. When I got home from college and when I had some free time, I tested this game for a few hours. Honestly, I don’t like racing games. Yet, for this special first request, I did an effort. While this game is in its alpha stages, I had some troubles with it. Maybe my tablet wasn’t strong enough, but it ran extremely laggy, and I had to use my Android emulator that I had lying around from the time I was still studying computer science. The app ran a bit more smooth on my gaming laptop. And it’s not the emulator’s or my laptop’s fault since it can run games like Alan Wake or Minecraft at 100+ FPS. The game also crashed various times on my tablet, and it consumed memory like it was its only feature. My cleaning app suddenly said that 90%+ of my memory was in use. And I closed EVERYTHING. Besides that, there was a light issue. The game was dark. And still on my emulator it had some problems with it. Since I haven’t finished the game and since it’s an Android game, this article might be shorter than you’re used to me. Anyway, let me think what your thoughts are on the game and/or this review in the comments. 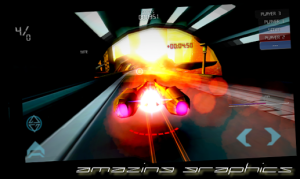 Let’s dive right into the issues first. Honestly, for a game looking so impressive as this, the menus are just terrible. They are straight forward, yes, I give it that. But I can’t help to think that this game would benefit so much from a much more clean menu. It looks a bit cluttered. With an options bar to the side. And since the Android games their first impressions are the ones of the menu or the first few minutes, this game’ll lose a lot of its customers.

Also, maybe this is a bug, yet the first two tracks are unlocked from the first stage. If this is intentional, that’s a pity. Since smart players are going to play directly the 2nd track instead of the first. Since it wouldn’t unlock anything more.

Also, when you wait long enough, the music on the menu just dies. I had the game open on my 2nd screen, and it just stopped when I started writing this paragraph.

Sadly enough, the menu isn’t the only biggest problem with this game. There is an issue that I often see returning, on the Android market, Reddit and various other locations. The controls aren’t smooth. Even when playing it on my tablet, the controls to move to the sides didn’t respond. I’m maybe guessing that this game doesn’t support multitouch very well. 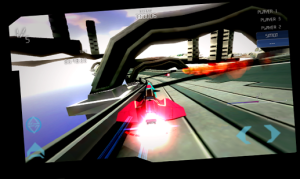 This game feels and looks like that it has huge potential. The graphics are extremely well done, and the gameplay is interesting. Yet, the game needs a lot of work. An awful lot. At the state the game is at now, this game is a disaster. Full of great idea’s yet not worked out.

Another example of the issues are the fact that they talk about power-ups. Besides the speeding up one I haven’t seen any other one. And this is a big problem. This feels like false advertising. And I swear that my ship flew through various items without getting a bonus.

The timer is also lagged. It jumps. And it bugs the crap out of me. I feel that the timer in a racing game should be the first part that works flawless. And I checked if it wasn’t an issue of my emulator, my tablet does the same thing. Also, I truly advise the developer to move the health bar of the ship. Since when you speed up, you barely see it. And makes for much confusion.

The game has a low FPS. It wouldn’t surprise me that the graphics eat too many resources which doesn’t leave a lot of left for other processes in the game.

In short, this game needs a lot of work. From more music tracks to a radar, those are features I feel this game would benefit a lot from.

And that’s all for this review, let’s go on to the conclusion!

+ No too annoying ads.

– It’s released too early which makes the game lacking a lot of features.

I want to thank the developer for giving me this chance. And I wish I could have given a more positive review for my first review request from a developer here. I think they are really courageous to ask reviewers like myself to ask to review their alpha product. It’s a move that more developers should do.

Yet, this game feels extremely unfinished and that’s such a shame. It needs a lot of polishing work before it can be called a final game. I’m not going to score it since it’s an alpha version, yet I might revisit this game after a year to see how it has grown.

Thanks for reading and hopefully until the next time!