Alright, after such a long time of teasing this game… I’m going to review it. I’m sorry Smashy for two reasons. One, that I didn’t finish the series. Yeah, that Smashy in the series’ll be disappointed. And two, sorry NekoSmash, brother that we didn’t the planned co-op review. I wanted to get this review out of the way. Maybe we write something better together. I have something in mind. Anyways, Evoland. What an evolution. Puns. Okay, I’ll stop. Let me know in the comments what you think of this game and / or this review. But without further ado, here is the review. 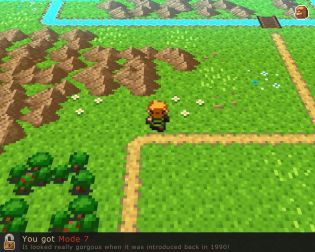 The first thing that falls victim to my criticism is the story of a game. If there is even one. Most RPG’s have a generic story like: “Save the princess” or “Kill evil dude X”. Yet, the way how it’s written is always different. And in this game it’s a lot different.

The game is based around the evolution of RPG’s. And some dialogue is based around that. The story gets from extremely simple to a deep story. And I like it. It’s extremely interesting. While it’s nothing unique in terms of new stories, it mixes a lot of great and memorable scenes from big legendary RPG’s.

The game raises a lot of funny moments when you play it. I had moments I’ll never forget. References to famous game creators and various references to RPG’s. From Zelda to Final Fantasy. A bit of Golden Sun even. And Dragon Quest. I adore the style of this game. And what blew me away is that there is a Diablo part!

Yet, with the story comes already one issue with the game. It’s on the short side. This game could have been longer. A lot longer. Sometimes it jumps a bit too quickly from one generation to the next. As a retro game addict, I know when there is something skipped or gone over too fast. I wish they payed a bit more attention to certain parts. 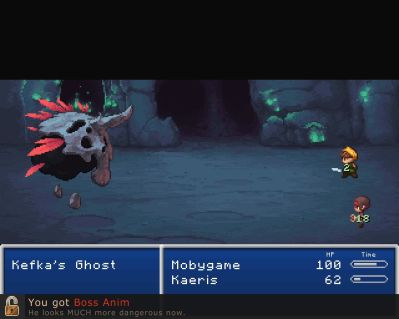 Is Evoland easy? Well no, at some places it’s really harsh. And that has to do with the controls. Maybe it’s just me not being used at PC RPG’s but the controls feel strange to me. It feels like I’m playing a game on an emulator. It doesn’t feel natural. I’m used to play my RPG’s on my PS2 or DS.

But even with the free movement update, the movement feels a bit stiff. And this has mainly to do with moving extremely slow. Well, not extremely slow. But the speed of yourself is sometimes a bit too slow. And this is an issue because some enemies are so fast they can drain your life easily.

Another issue with the game is the save points. I absolutely hate it in RPG’s. I can see them used in platformers, action games or adventure games but not in RPG’s. Why? Because grinding that’s why. And the battles are sometimes brutal. The enemies hurt a tad bit too much. One or two bad moves and you can die. Okay, you can level up. But you can barely see the stats. What’s the point then of placing stats while leveling up?

Where I pull the hair of my head is one of the biggest irritations I have with this game. Potions. Yeah, because of several reasons. One, you can heal your enemies… Two, you can only use it in battle. And three, you can’t use it at the parts when there are hearts. Speaking about hearts…

They are a bit flawed as well. Enemies can hit you for one heart. And when you pick up a heart, it fills up just 1/4th of a heart. Well, wait what? This doesn’t seem right.

Sadly enough, that’s not all…

Let’s take a look at this… messy diamond? 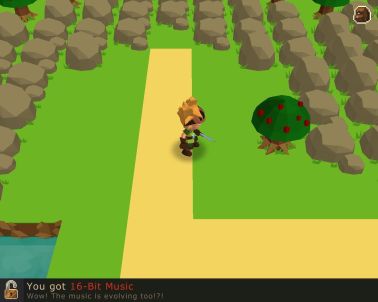 It almost seems that I try to rip apart this game. I’m actually not trying to do that. The gameplay is extremely excellent. It takes you on a nice trip. Yet, it’s clear that this game isn’t for everybody.

Some secrets are not that well hidden for veteran gamers. Yet, some options are locked until nearly the end of the game. And that’s something that could have saved this game a lot.

The upgrades and treasures are given to you with chests. There is a reason to replay the game since you have collect-able stars. And the card game is lovely. And like I said earlier, the witty writing benefits the game a lot.

If you have played various older generation RPG’s, you’ll find this game even more fun. I loved the references. But truth to be told, I have something for references. It always puts a smile to my face.

One of the best things in this game is the music. Man, they may claim that they top the charts since the release of the game. But I wouldn’t be surprised they do. The music is lovely. I would even call it perfect for this game. The sound design is also great. I have nothing to point out that is bad about it.

The animation is pretty. It fits the generation and it doesn’t try to break the immersion with newer generation. I think games loses their charm when you try to make some new generation effects in an 8 / 16 bit style game. A problem that the Angry Video Game Nerd Adventures suffers from. It’s almost like the developers couldn’t decide which generation to put it in. Or which theme to take.

Lastly, the graphics. I can’t really judge them since they change an awful lot in the game. But in short, they are spot on for this game. I loved them from the start to the end.

Oh, one last thing. You know what would be amazing? If you finished the game, that you could play the original flash browser game as a bonus. But now with save points or something. Just an idea though.

– Some gameplay flaws ruin the game.

So honestly, this game isn’t half bad. Some reviewers hold this game high in the ranking. Others go rip it apart. My opinion? Well, it’s an amazing game. I loved the experience a lot. But I can understand why people dislike this game.

It has some issues with it’s gameplay. Like I forgot to mention that you can’t change the options in game. Or like I heard in another review with my research, this game hasn’t an identity of it’s own.

So, in short: this is a great game IF you can look or agree with it’s flaws. Otherwise, it’s the best that you play the original flash game. If I remember correctly, it’s on their website.