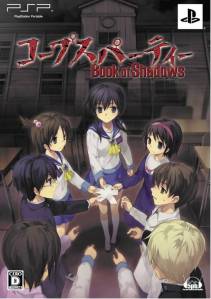 Am I safe here? This darn school man. It’s haunting me. I’m trying to relax on my hiatus and getting my real life work done but this school is stopping me from progressing in my goal. I simply don’t understand. I have to fight this. The creepy ghost children aren’t helping. Wait, wait, wait… Haven’t I seen this before? Like some first impression I have written a some time ago. About Corpse Party – Book Of Shadows: First Impression. Nah, that can’t be. This must be an unlucky coincidence. Otherwise I could simply say that people could leave a comment with their opinion on the game and or this article. Hah! That would make life a lot easier. But no, I have to be trapped down here in this school. Again. Maybe my fate is different. Since I haven’t found the secrets. (Read, I haven’t played the secret episode. But I have finished the rest of the game.) So, I’m going to try to make a fair attempt here. Deep breaths. Avoiding spoilers and here we go!

Now I’m quite sure I have … seen this before. This has an amazing story. Plot twists around every corner. This game actually got me off guard a few times and made me actually feel somewhat scared. And scared, as in it crawled under my skin.

It’s for sure better then the original. I feel that it has more depth and more interesting use of character. As if it were a sort of expansion pack for the original. You explore this hell forsaken school once more with different characters and their backstory gets more fleshed out. But where I truly applaud the creators here, is how one chapter actually took place outside of this Heavenly Host Elementary.

One remark has to be made though, some story parts are way too long. It asked nearly one full hour from me before I could start playing. While I adore long stories, this game could have dosed it a ton better. But with a healthy dose of humor, horror, heartwarming and thrilling parts… It’s forgiven.

The fact that you see unanswered questions get answered and how the characters are used to their full potential is just  mind blowing to see.  I said it before and I’ll say it again. This here, it nailed the story perfectly. I have barely any remarks to the story. And even if you have experienced the previous installment… This will have some quite unexpected turns.

Wait, what was that?

Son of a gun! I’m quite sure I heard something. Maybe it was one of the amazing music tracks from the amazing sound track. Too bad that some of them are quite short.

Or might it be one of the voices? Like the amazing voice acting some have. Which brings amazing atmosphere to the table. What am I talking about? Reviewing voices? Am I going insane?

But those sounds, they are crisp and clear. Yes, they make me feel extremely scared. I’m afraid to move. It’s almost like the sounds got me extremely drawn into the game…

Damn, I saw a ghost.

Maybe I’m seeing things. Maybe I’m not trapped in this school! Maybe I’m too drawn into this game. That might be it. It was such an amazing entry into the series.

And the visuals in this game blew me truly off my socks. Creepy hallways and “nicely” decorated classrooms. Every place was nicely designed.

None of the places felt unfinished. Every location had such attention to detail and some had some neat additional dialogue.

The cutscenes, are underused. The game has only a nice cutscene at the start where there a lot of images used. Here is the hard part, I barely can’t say anything about the animation of this game. Unless you take one new element into a count. The “corruption” level shall we say to avoid spoilers.

The more wrong moves you do, the longer you do to escape (a dangerous situation), the more red your screen becomes. It’s almost like you see a wave of blood passing in front of your face. And that is an amazing touch.

I think I’m safe. Thankfully. I knew that writing this article would have helped me. Now I’m sure that I’m a big fan of the Corpse Party series. And I waited on purpose with this article to give this game a special number.

And the gameplay of this entry didn’t disappoint one bit. Where you have a big limitation how you can move, you can explore every single bit of the school. Thanks to the new investigation system. It was truly such a nice thing to see.

There were also many tweaks to the game. Like the ability to replay voice acting! Yes, when you’re inside the menu, you can let the characters say their lines again in the “history” menu.

The game can be a bit hard, but exploring each and every room to make sure you haven’t missed anything is a great way to progress. Another helpful tip I give is, explore the previous game also extremely well. If you do that, there will be additional content waiting for you in this game.

The length of this game is just mind blowing. I’m not going to lie that I was able to play this game for nearly a month. Admitted, I played various other stuff in that month in order to write some interesting articles for my blog. But to have it completed just recently, is just a great sign.

Where I have to applaud the developers here is the interesting addition of the bonus content. There are no extra chapters this time around, apart from one, when you have seen ALL the endings; including the wrong ones. You can listen to all in game music, with a sort of clunky player, and you can hear some behind the scenes commentary from the voice actors.

And with that, I’m going to leave it here for this article. While I realize that I have been vague on certain parts, I encourage you guys to play this game to find out how big of a master piece this game truly is!

– Sometimes story parts are a bit too long.

– Some music tracks should have been a bit longer.

+ Epic audio work in both the music and sound parts that will really draw you in.

+ An amazing game with stellar visuals.

This game truly held me in it’s grip. I can’t wait to replay the original Corpse Party in order to unlock everything in this gem. While I tried something different to present this 20th review of mine, I had a tough time reviewing this one. This game was perfect in my eyes and I could only nitpick.

I truly cross my fingers that xSeed games ships more of these developers over seas since they are truly worth the time and money. Since these two games were spot on classics for me. It even got me into watching anime and reading manga again. Something I stopped doing because of games.

This game series is one of my favorites. It deserves a spot on “my most influencing games of my lifetime” list. And pretty high on this list!

Anyways, it’s how I said before my conclusion, play it for yourself and you will understand that this game is made with the gamers in mind. This adventure is one that will grab you and don’t let you loose until the end!