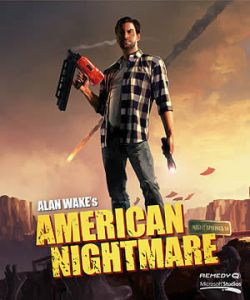 So, before I begin at this article, I have to mention something for my readers. I found out that I made a mistake in the numbering of my reviews. I was off by 2 from number 15. So, I had some work fixing them all. But don’t worry, none of my URL’s changed. So, Remedy has released a sort of sequel to their amazing game Alan Wake. I haven’t written a first impression of this game but I had written way back a first impression of the original. To be honest, you may call this game more of an extended DLC mission then an actual game. But I’m going to review it if it were a stand-alone game. If that’s okay with you. And if that isn’t okay with you, I’m sorry, articles don’t rewrite automatically like Alan Wake can. My apologies for that. Man, I haven’t even started with the actual review and I’m already making references to the game. Anyways, my best buddy MiseryLC has watched a LP of this game. He found that this game was pretty sweet. But do I agree with my best buddy or are there some things in this game that make me dislike this game? Let’s see. Oh, like always, feel free to comment on this article and or the game.

Compare it to the original? 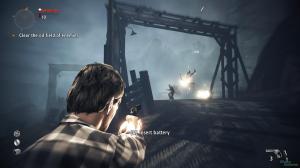 Would it be wise to compare this game to it’s original? Well, honestly that isn’t the best idea ever. Because there are a lot of things different in this game then in the original. While keeping the same formula, this game is nothing like the original.

Let’s first talk about the story. The story is told differently this time around. Real life actors played some cutscenes. While in the original, if I remember correctly, only small parts has been done with real actors. The acting scenes are extremely welcome and add to this game.

The story in this game is rather interesting. It aids the gameplay quite well. But the end of the story of this game is extremely weak. It was a balls to the wall action story with some little twists but I feel like the first game had a way stronger story.

Let’s talk about the graphics for a moment. While my laptop couldn’t handle the highest settings very well, the normal settings gave extremely neat settings. The dark feel is back full force in this title then in the original. With some attention to detail, I barely have anything to complain about the graphics.

But, the collision detection is a totally different story. Some objects that you know can move, don’t. Yeah, ever had a chair that doesn’t move a pixel when you run against it? Thankfully, this issue isn’t that big and isn’t present with the enemies.

I’m so sorry for the pun. Wait, you don’t understand the pun? Let me explain, there is actually a nail gun in this game. Yes, a nail gun. Remember my review of the original where I said that the selection of guns wasn’t the best? Well, this game totally fixes that!  The interface for selecting guns is a ton better.

There is also a use in game for collecting the pages. I don’t quite remember if there was a use in the previous game for them apart from getting the backstory. In this game they are used for unlocking guns. Interesting.

This game has some changes to the gameplay as well. First of all, the health system works quite differently. You don’t fully get your health back. You can have 3 hits from the toughest enemy and you die. But your health bar is now in three parts. So, when it’s somewhere mid-way the 2nd part, it will only fill the 2nd again instead of the third as well.

Also, the compass is quite useful. It has a bit more icons then in the original. You can’t see the full picture as far as I know but certain clear icons appear when you’re close to ammo or light to regen.

This game has also various new enemies. While the design of the enemies is the same then in the original, the new enemies more then make it for it. From enemies that duplicate when you shine light on them to enemies that can divide themselves into birds. It made the game more challenging and I quite liked that. 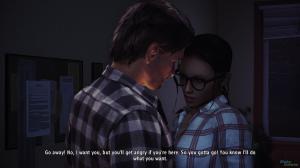 So, before we continue this review, I have to admit that I haven’t played the survival part of this game. It looks like fun but it’s not totally my gameplay type. Yet, it’s a must have addition to the game.

Anyways, the flaws of this game. For starters, the final part of the game is a tad bit too hard. Think back at what I said earlier, the game has an incredible weak ending. So in other words, you get a little reward for that high input.

The biggest flaw this game makes is that it’s extremely short. According to Steam, I finished this game in 5 hours. While I honestly don’t believe that, I can’t deny that this game is rather short.

Another thing that might turn people off is that there are very few settings in this game. Due to the nature of the story, you will see some locations several times. The variety in this game is rather low.  That’s a sad part.

Also, I have noticed three times that the scenery moved for no reason. And it didn’t get explained either. Why does a big cinema screen suddenly move from one side to the parking lot to another side. I’m sure I didn’t get turned around or anything.

So, before we end this review, notice how I didn’t talk about the animation, music and sound effects. If you’re interested in the game, check them out for yourself. And if you want to know my opinion, they are great. I just like to don’t talk about certain things of the game so you have some surprises after reading this review.

– Weaker story then the original.

– Some things got unexplained that should have been explained, Dues Ex Machina’s and scenery that suddenly changes.

+ Neat bonus story (while not perfect.)

If you want to buy this game, buy it on Steam. The low price of 9€ is actually totally worth it. Don’t buy it for a larger price. Since this game doesn’t offer more value then that.

At the start of this article I talked about how this game should have been an expansion pack instead of a stand-alone. This would have increased my final score.