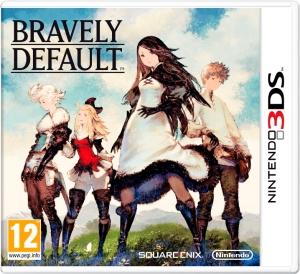 Thanks for tuning in you guys. Today, I’m going to try something different. In the last few years, I met a guy on a garage sale with the same first name then mine. A few months ago, I found met him again through Dutch website, similar to eBay. After a few mails back and forth, I joined his Facebook group. Now, if you are a reader from Belgium and you’re interested in games… Don’t wait! Go take a look on that page. This is a group to my heart. They are collectors like myself. I might ask them to get the forums to work together. As a sort of apology to you guys and to them (because I haven’t mentioned them while I promised it) I asked their opinion on this game. Keep in mind, this isn’t a review since I haven’t finished the game myself. Yet, there are guys on GamersHive that finished it. So, I’ll be using their words to talk more about this game. The only “altering” I did to the quotes is translating them. So yeah, before we start, feel free to leave a comment on the article and or the game. 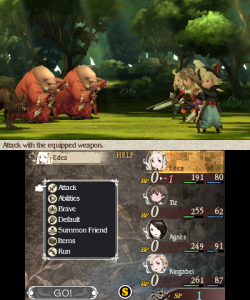 Honestly, I wasn’t planning to play this game. I got this game thanks to my forum. When a few members where hyped about this game, I kept the title in mind. A week later, I was looking on the shelves of a local game store for any potential great sales in the 2nd hand section. When I saw this game on the shelves, I decided to pick it up. To check if the hype was really worth it. I rode my bike home and popped the game in my 3DS.

Bravely Default is what the new Final Fantasy should have been.

Now, my friend. That’s quite a big statement. I’m ashamed to admit this, but I haven’t played too many Final Fantasy games. Actually I have never beaten one. Yet, I do love the formula of the game. While I heard mixed reviews on the latest releases, I do think that there is some truth in the statement.

First of all, let’s talk about the story. I’ll be using now a lot of a mini-review Sam Stevens placed as a comment to my post in the group.

The story is really beautifully created. It gives you the feeling to continue playing to see the ending.

I’m sorry Sam, but I have to disagree. The opening was truly unexpected. The introduction is done by using the AR features of the 3DS. It gives you a personal feel through the story. I haven’t beaten the game yet, so I don’t know how it ends but from what I have played… I don’t think the story is that good. You won’t hear me saying that the story is bad. That is totally not the case. Let me explain myself.

The main story is generic. It’s a basic story of “save the world with crystals”. But here the saying of “don’t judge a book by it’s cover” is very, very true. The execution of the story is what makes the story good. The dialogue, interaction with the characters and their backstories are all very well written. Sadly enough, some characters suffer from “tropes”. What I mean here is that they are your standard characters. To say it very crude, the characters don’t have a soul. I don’t see any change in their personalities. They stay way to close to what their what their trope is supposed to be.

Here the story looses a lot of it’s charm. Sadly enough, to experienced story tellers, the story becomes predictable. In summary, the story is good but not great. It has it’s moments here and there but there are so many missed opportunities. 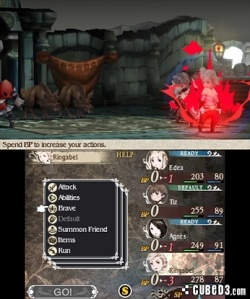 Let’s move on to the gameplay. And to save me some trouble, I will quote some very true things from Sam Stevens.

Norende Village and the StreetPass support really aid you in your quest.

Now this is very true. On the surface, the game looks to have a basic RPG-style gameplay. With turn based moves and random encounters. That’s only the surface. The game is deeper then that. Sam gave two examples how the gameplay is more then your standard RPG game. What they exactly are, well… that I leave as a surprise to you guys.

The feature of being able to set the amount of random encounters is just amazing.

Oh yes! Sam, you are totally right. This is one of the big selling points in my opinion. It’s really hidden but it’s so handy. This way you can explore early dungeons again without having to be interrupted by weak enemies. It’s just great. Also, the game warns you if you disable the random encounters! The game might become too difficult if you try to play this without them. Yeah, great move.

Now, the title of the game is pretty much the gameplay of this game. You can either “Brave” or “Default”. The “Default” is your basic “Blocking” / “Defending”  but with a twist. You earn a point when you “Default”. These points can be used to “Brave”. This way you can release multiple attacks at once. This adds a whole layer of strategy. Since if you “Brave” without saving points first, you will end up loosing turns with that character. 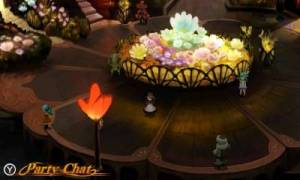 Now, usually I would be about to wrap up my article. But since I mentioned some guys, I think I will continue this article for just a little bit. In this part, I will talk a bit about the negatives of the game. What didn’t I enjoy? I realize that I leave out a whole bunch of things that I haven’t talked about, but I save these for my review when I beat the game.

So, the first flaw I want to talk about is something that is a big shame. Minor spoiler here but at one point, you get an airship. It’s actually really early on. Now, you can go to every place on the map. And that’s amazing. The open world feeling is such a fun thing to play around in. Until you get a slap to the face.

When you try to enter a dungeon before you’re actually supposed to, the characters say that they shouldn’t go inside, since they haven’t business there yet. What? Like ProJared said in his “1 minute review”:

Let me experience my own mistakes.

This is very true.

Another mistake is how the game has micro-transactions. I don’t think I have to explain myself here. It’s just silly. I might talk more in-depth about it in the review. Although, I have already talked about it in my last rant. So yeah.

Another thing I dislike about this game is how grinding is such a thing. I actually stopped playing this game because of a part in the game where it’s a boss rush. And you will need to grind, a lot, in order to beat them. Either that, or I fail at understanding this game. It might be a combination of both. But I don’t the grinding in this game fun. Sorry.

Anyways, thanks for reading. I’ll talk more about the graphics, difficulty, music, controls and design in my review. I hope you enjoyed this article. Thanks to GamersHive for the amazing quotes. It was really fun to try out something different. Now, I have a game to beat to fully review it. Hopefully until then!