So, this game has been remade into a HD remake. Honestly, it’s one of my favorite Wii games. It’s also one of my favorite games ever made. Now, it’s a big shame that I never wrote about this game. In addition to that, I haven’t been writing about Wii games as much as I like. The console is pretty close to my heart. Since it’s the first console I owned AND I got it for finishing my studies at high school. This game originally came out for the PS2. I was really amazed that the PS2 could handle this kind of games. But I learned that later, since I felt like this game was made for the Wii. The motion controls truly blow the PS2 version out of the water. But, is this game as good as I’m claiming? Or am I blinded by nostalgia here? Well, let’s take a look to this game. Feel free to leave a comment on the game and or my article. But anyways, let’s start. 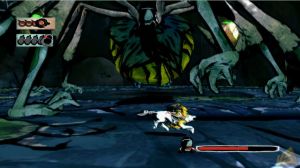 The story in this game is something special. The opening scene gives you a feel that the story is going to be one you have experienced already before with other characters.

But trust me, the opening of this game doesn’t show at all what this story has in store for you.

I nearly had beaten the game, but then a friend of mine saved over my save file by accident. So, I lost all my progress. I was really bummed out since this is a rather lengthy game. I peeked at the walkthrough, and while I was nearing the end… I had put around 40 hours into this game.

At it’s core, you can compare Okami a bit with the Zelda series. While that series focuses more on saving Zelda with a twist, Okami gives you something truly different. As good as everything in the game is based on Japanese lore. I’m not kidding you. At the end of this game, you have seen a lot of Japanese myths and stories, without even knowing it.

For this reason, I won’t go every in-depth with the story. It’s too beautifully crafted to have something spoiled for you. The only thing I will tell you is that you play a wolf god who travels with a bug-sized warrior-artist.

The writing can be funny at some times and I had times where the story nearly made me emotional. This story is one that takes your attention and doesn’t give it back until you have beaten the game.

HD graphics? No need for that! 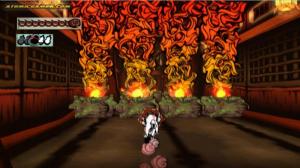 I use this game as an example to defend Nintendo when people are bashing them for not having a console that can render HD graphics. Now they do with the Wii U.

But this game in general proves a point. You don’t need amazing realistic graphics to have an eye-candy game. The art style truly looks amazing. You get the feeling that every character, scenery, animation… is drawn by hand. Well, not just drawn, water painted. Which is a lot more difficult then just drawing. Because when you mess up with paint, you can’t easily erase it.

The game looks stunning. You can truly feel the love and devotion the team put into this game. And every single place is memorable in it’s own right. Because this is an adventure (action) game, there is backtracking. But in this game, that’s not a bad thing. Since almost in each area, there are parts you can only access with certain powers you obtain later in the game. So, you can discover new things and find treasures even after the main story has already happened on that place.

I can honestly talk about the visual aspect of this game for a long time, but sadly, I have to mention a negative here. There is a rare bug that I experienced several times. There is this weapon you can use to attack enemies with. It’s a yellow magenta kind of thing; While it’s one of my favorite weapons to use, the graphics can go glitch out. You know that you’re affected by this when you don’t see the heads of the characters anymore, since they are stretched out. And I have even worse news, you will have to skip cutscenes then. Since they all glitch out. The glitch can only be fixed by running to a save portal and saving the game. When you restart then, the graphics are thankfully fixed.

Long time readers of my blog know the drill by now, this segment is actually the part where I close off the first impression. But I have only talked about how beautiful this game is and how strong the story is.

Now, I can’t fit the gameplay, music, difficulty, controls and such in this final segment. It wouldn’t do the game justice.

Surely, I will talk about those things more in depth in  the review, if I ever write it, so don’t worry. You will hear my opinion on it.

Honestly, I truly think that you should play this game for yourself. This game is a game that benefits more playing blindly then reading up about it before you play it. A great tip that I give you is that you have a tablet or a laptop close to look up the actual myths and lore behind the game. Since you will find amazing stories.

To close off this article, let me get one thing clear. Is this game a clone of the Zelda formula? Well, yes and no. There are a lot of similar elements to the Zelda formula but it has it’s own unique elements that make it a very different game then Zelda. But, what I can tell you for sure is that this game is a blast to play for every Zelda fan! You would be a fool to let this game go under your radar and never play it.

Anyways, I think I’ll leave it here. Thanks for reading and I hope you enjoyed reading this as much as I couldn’t stop myself writing about this game. Hopefully I see you another time!