Wait, what? I already talked about this game… True, but for the GBA month, I decided to review the GBA version of this game. The game that actually made me buy the PS2 version. I found out about this game when my local game store still had a renting system. I rented this game and I finished it after renting it three times. Surprisingly, nobody deleted my save files. Anyways, I wanted to buy myself a copy of this game, but I haven’t been able to. If somebody has a copy of this game laying around, please contact me. I would love to buy it. Since I really like it this game. But that isn’t what this article is about, isn’t it? This article is about how the game is. It’s a review. So, let’s take a look at Nicktoons – Battle For Volcano Island. How good or how bad is it? Keep in mind that I’m doing this review out of memory and the first few levels I was able to play through some alternative means. 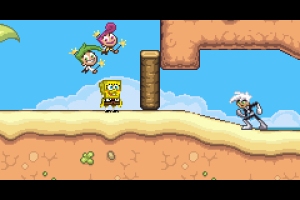 So, I already too a look to the PS2 version of this game. Let me tell you, apart from some characters, the story is exactly the same. In the GBA version, there are fewer characters you can play with, but I think that is for the better in this version.

So, in this game you are summoned to free Volcano Island from an evil entity. It’s a story that will appeal to children but it will be bad in the eyes of adults. I could start bashing the game for this, but I think that would be unfair.

The game is aimed at children and people who like a nice platforming game. Those games have in most cases no real deep story or character development. Most platformers add an additional genre to have a better story.

This game is at it’s core a platformer. So, the tutorial shouldn’t take long. Don’t worry, in this game the tutorial doesn’t take long at all. The first level isn’t challenging but it’s a great way to learn the ropes of the game.

How does it play?

So, you play as one of 4 Nicktoons. Each character has their own special abilities. Spongebob can go through dirt, Patrick can use his air pants to float through the air, Timmy can stretch his arms to … crazy lengths and Danny can use his ghost powers to a certain extend.

The game isn’t very long, but it’s length is quite decent. There are 4 worlds with each 4 levels. Then you have an additional final boss fight. Let me tell you, the final boss fight is a real test of your skills with this game.

Something that might have crossed your mind is that this game is easy. I urge you to think twice about that. The game isn’t as easy as you might think. That’s due to the amazing checkpoint system.

Each time you get hit, you loose a heart. Five hits, and it’s game over. Each hit sends you back to the last visited checkpoint. Each new checkpoint you visit gives you back one heart. So, if you aren’t careful, you have to redo a level over and over again.

There is some replay value in this game as well. In each level, there are several golden hearts. If you gather enough of them, you unlock a special level. But getting the golden hearts is the really tricky part. They are sometimes hidden but most of the time hidden in plain sight. The kicker is that they need pixel perfect reflexes. The golden hearts get added to your total heart count at the end. So, if you get hit, you loose your special golden heart. I promise you, it gets challenging in some places.

Each world has a theme. Well, sort of. The nice thing is that you don’t have to beat every level in order. You have a hub world where you can go and play any level you have unlocked.

Some levels might have a bit of back tracking, but it’s done in such a way you don’t really notice if you don’t pay attention to it. Since in those levels you go back in a different way because you gained a new ability.

Visually, this game looks how it should. Bright and colorful. In my opinion it looks extremely nice on the gameboy screen and made me play this game to the very end. Everything has that Nickelodeon vibe over it and all the art styles of the different series mixed without something that stands out.

In terms of the animation, well, it’s quite basic. Nothing really special but it gets the job done without a problem. I don’t have any complaints there.

The music is what it is. It isn’t too memorable  but it isn’t forgettable either. I had the tunes stuck in my head for a couple of days but as soon as I played some different games, I forgot about them. Honestly, I don’t think the game has bad music. No, it’s quite decent but not good. I have that feeling that there could have been done more with the music. The same goes for the sound effects or rather the lack of variety. There aren’t a lot of sound effects in this game. So, I sometimes felt that the action wasn’t… well, action-y.

Anyways, I think I’ll leave it here for my review. I talked about what I wanted to talk about. Let’s go straight on to my conclusion. For the people who are new here, I usually never talk about a game in-depth because I want to leave some things to surprise you when you decide to play this game.

– Weak story, but good enough for the kids.

– The placement of the golden hearts is just brutal.

+ Addictive gameplay. (You truly use all characters)

This game is a must buy or must play if you are a big GBA fan or a big fan of platformers.

Thank you for reading and I hope you enjoyed reading this review. I hope to see you another time on my blog. ~