Recently I joined a crew to make do the testing for a game called HomeSick. It’s going to run on the RPG Maker engine. I have reviewed a game in the past, so yeah. Remember the Legend of the Ninja? Anyways, in this article I’ll talk about the first demo they put out for us to test. The testing is private, so I won’t provide a download link. Also, they announced that they are going to release an updated version in the upcoming days, so I might write an update article then. Anyways, let’s dive right into this game. Let’s analyse it. And as usual, feel free to leave a comment on the game and or the content of this article. 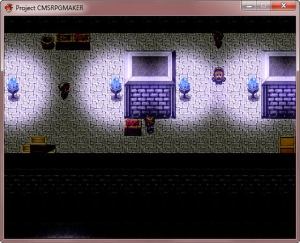 I want to thank my friends over at Gamers’Hive to grant me access to this beta testing, even while the spots where full. Crying Man Studio’s are the developers of this game. They release development video’s here and there. The fans can give input into the game by giving comments. This is clearly going to be a labor of love.

Compared to what I played in the past in the engine, the direction they are going with this game is looking good. Graphically, the game looks nice. Everything fits together nicely. While there are some sprites I would change to match the emotions of the story, it’s a known bug.

A suggestion to the developers from me is that in the graveyard, you could put the names of the beta testers on a tomb stone? Like the beta testers are buried there? It sounds fun, but it’s totally up to you guys.

Because this game is at it’s alpha / beta stage, this game is far from finished. I could start nitpicking on some collision boxes not being there and etc., but that’s when the game is ready to be polished and finished up.

There are a few things I didn’t like from my first experience. The soundtrack of this game is really great and helps to immerse yourself into the world that they created. Until I heard the theme of the battles. It feels out of place. It doesn’t feel action-y enough. It’s too calm to be an action theme.

What I mostly do to judge a theme is listing to the music with my eyes closed. If I’m able to create a similar scene that fits the music then is actually displayed on screen, then the music is fitting. But the battle theme didn’t pass.

They know that there are several spelling errors. Honestly, I thought that the writing was too generic. Don’t get me wrong, it’s okay, but you feel the Dutch influence as well. I offered to help rewrite some lines, but I haven’t gotten a reply. Simply because not so long after I started to write this article.

I know, this is an extremely short article. Most of the bugs have been caught that I wanted to talk about so, I think it’s not really needed to talk about them in depth in my article.

It might be better if I wait until the updated beta is released and then take a more in depth look into it.  This was my initial experience and so far, it’s going good. I wish the developers the best of luck and cross my fingers that the final product will be amazing.

Anyways, thanks for reading and I hope you enjoyed it. Until next time guys, take care!