Back when the 3DS wasn’t released, I played an overload of DS games. More then I care to admit. There was one series I wanted to get into but actually never gave a fair chance. That was Etrian Odyssey. So, two weeks ago, I decided to pick up one of the 3DS games. Since the core game mechanic interested me. Now, I haven’t played many other games besides this the last two weeks. But why is it so good to me? I will explain in this first impression. I hope you are ready, since we are going to the labyrinth. Wait, no… This is real life, not the game world. So, I have to say my usual sentence. Feel free to leave a comment with your opinion on the game and or the content of this article. 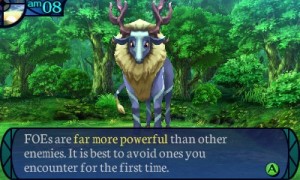 Alright, first of all. I’m blown away by the story. Most of all, I think this is one of the best writing I have seen since I played Corpse Party. Sometimes the writing is as if you are reading a book. While nothing that much happens on screen, the short yet extremely powerful descriptions you are given are enough to immerse yourself in the world and give you the feeling to be there in the world.

The characters are also memorable. The story goes about a girl that lost her memory. But, strangely, the story wasn’t the main focus of the story until the point I played. It was something different. There are other side stories that are all leading up to one interesting setup. It’s almost like a real life as an explorer. There are so many things going on and you try to make the best of it.

The characters are what makes the story even more interesting. They might be your typical hotheaded mage, wise healer, strong (female!) tank and silent main character. Yet, they have been written in such a way that it doesn’t bother the story. The characters even get fleshed out and thrown in day to day situations.

But enough about the story. I can’t praise it enough. What I love the most about this game is the fact you have to draw your own map on the touch screen. This takes me back so many years, when I was first playing The Legend Of Zelda on my cousin’s NES. We both started to draw maps together and tried to find and share secrets that way. The wonder I get when I find an unexplored part on a floor I thought I completed is just amazing.

So, this game has a very nice map creating tool. It doesn’t punish you by not allowing you to the next floor until every square has been discovered, it rewards you to try and get to hard to reach area’s with amazing treasure.

I’ll talk a bit about the gameplay later. First, I want to talk about something else. The music of this game is really well done. In fact, I even replaced my main ringtone with one of my favorite tracks from the game.

Another thing that also shines in the sound department is the voice acting. The voices are really well done and add a lot of character … to the characters. They also are really helpful. The shout what they think is the enemies weakness in battle. This is where I have some minor nitpicks. The battle system is where some polish of this game … well, I has some minor mistakes.

The “auto” feature doesn’t always chooses the best option to attack and looking up a monster while fighting can’t be done in sub menu’s. That are just two examples of issues I have with the battle system. The randomizing of the characters don’t bother me that much, since that brings some element of luck to the game… Which I really like.

The presentation of this game is what I really think doesn’t need an upgrade. I have barely anything negative to say. Apart from some lazy recoloring of some enemy models, I think they made some eye candy to enjoy while playing this game. If only the added some more ambient sound effects into the game to make it a bit more alive then it already is.

To say that this game is perfect would be a lie. There are some minor annoyances, like the deleting of icons is kinda tricky to do… But most of the things I find are mostly minor. Even the controls, I can’t seem to find any major issues. They are responsive and work pretty well.

I could argue that there isn’t anywhere to heal your party for free, but that just adds the strategy element of this game. You need to keep exploring and find enough items and treasure to sell so you can keep healing.

That price always goes up, from what I understand… along with the levels of your party members.

Is this game for everybody? Well, that seriously depends on what mode you play. I’m playing classic mode. That means I get the full story yet the game is a bit more challenging. I wanted to play a game that could kick my ass if I wasn’t ready for a battle or if I wasn’t paying enough attention. It delivers on that front. With some well placed traps and the introduction of really strong enemies really early, I’m always on my guard.

From what I read, the story mode is much more forgiving. But I wanted a challenge and I’m getting it for sure. And I’m enjoying it. That much, that I had trouble with writing a really coherent article. So, I tried to talk like an excited friend that tries to sell you on this game. I hope I succeeded in that. Even when you aren’t interested in this game, I highly recommend you watch a let’s play episode or something since the game is so well put together, I think it’s a shame if you would to miss out on this. So, I’m going to wrap up this article right here. I hope you enjoyed reading it as much as I enjoyed writing it. And hopefully, I would like to welcome you at another article. Until then, take care.~