I haven’t written an article in this series for quite a while. Once, I even thought about cancelling it. But hey, I think that won’t be such a smart idea. This blog is about my experiences with the games I play. And sometimes, I play games on my phone when I’m waiting on the train or when I’m waiting in the doctor’s office. So, let’s take a look at the Android games I’m currently playing. I’m not going to talk about them in depth, since there isn’t that much to write about when you compare it to for example a 3DS game. Enough stalling, let’s get tapping on that phone! And as usual in every one of my articles, feel free to leave a comment with your opinion on the content and/or games in this article.

This game is what I look for in my match-3 games. Something special, something unique that hasn’t been done over and over again.

The characters you can unlock in this game are quite nice. The visuals and music are good as well.

This game is polished and pretty well designed. Apart from the extreme harsh difficulty in the later levels (in my opinion), a better way to select the character you want to play as, the colorbind mode that only changes one gem and the strange way a gem/coin becomes usable to use power-ups on, this game is nearly a perfect casual game! 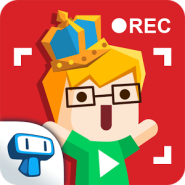 But this is directly also it’s main issue. This is a clicker game, where you can speed up the waiting by tapping. Apart from that, it’s a bit lacking.

This game has so much unused potential in v1.1 (Released on 21 december 2015), it’s a shame. It would be fun if the audience of your vlog channel gets tired if you make too much videos about one topic or you loose viewers that came to your channel for a certain topic.

The money to earn and spend on upgrades are in my eyes rather useless. Apart from some visual changes to the studio, I don’t see how it influences anything in the game. When I compare it to a similar game I honestly like, Bitcoin Millionaire, it feels less fleshed out.

Also, the animation is something I have some minor issues with. For researching, recording, writing and editing a video … The game uses the same animation.

This game can get boring quick. This game needs to have some more things to do when you are waiting for a video to finish. Or maybe I’m too harsh on this game. Since it’s the game I play when I have nothing to do for a few minutes.

The presentation is rather cute and stylish. And the whole idea behind the game is what got me interested in the first place. I just wished it had some more gameplay elements to make it more fun. Oh, and the microtransaction part seriously needs to less intrusive. Like in Bitcoin Billionaire.

This game can be rather cruel at times by some puzzles. But I’m getting ahead of myself. In this game you play the role of a pencil that has to draw a line to connect two balls together.

You win the level as soon as the two circles touch each other. Even when they would fall to their doom a second later, when they touch, you win.

This game has a very interesting social feature. You can share your solution over social networks. When you solve a level, it takes a screenshot of the game that you can share.

The game design in this game is really good for an Android game. It teaches you the mechanic first before the actual puzzles with that mechanic are going to challenge you. Another good system is the hint system. It makes the game really forgiving when you don’t find the solution.

The only negative I have is that your lines don’t always properly draw. If you move your finger a bit too much down or up, the game gets confused. But it’s a minor annoyance, since the recent updates, I’m not getting it as much.

So, that are three games I’m currently playing on my phone while I’m waiting for my train to go to work. Lately, I’m playing less and less on my phone since I … well, burned out on them.

That’s one of the main reasons I didn’t write an Android article for over almost a year. In any case, I hope you enjoyed my look into these games as much as I enjoyed writing this article. Also, feel free to leave your suggestions of Android games I should try out in the comments. I’m looking for games you can play on the side. It needs to be fun and keep you from boredom while waiting on … a train to go to work. The fewer microtransactions, the better.

I’m curious for the suggestion. Anyways, I’m rambling on now. Thanks for reading and have a great rest of your day! Game on, friends! Game on!