It’s time that I talk about a Golden Sun game. I have been putting this off for way too long. After I listed it in my favorite DS games ever made, I never talked about it. Apart from some music tracks here and there. It’s time to correct that. This week we are going to take a look at a game, I honestly thought I talked about before. In any case, the title and the box art here already gave it away.  It’s the 3rd game in the series, Golden Sun Dark Dawn. And as usual, feel free to leave a comment with your opinion on this game and/or the content of this article.

(Note: to make this article more readable and understandable for everybody, I didn’t to use the lore of this game and used a generic term.)

The story of this game takes place a few years after the original two games. The story starts out simple with two children getting into some trouble with a sort of magical hang glider. But rather quickly, this story changes into your typical “save the world from doom” story.

While the story is your typical RPG story, it’s the journey and the writing that makes it memorable in my eyes. Each main character and side character has his or her own personality.

But what I really like about the story is how all the lore is explained in a non-intrusive way.  As you may have guessed, this game is a JRPG and because it’s the 3rd game in the series, there is a lot of lore.

But instead of the characters explaining the lore in some dialogue or some boring exposition dump, it gets underlined. When you tap that word, you get an explanation on the top screen to get you up to speed. Also, all those words go in your encyclopedia so you read them at your own pace. This is something that all other RPG’s should do! That way, there can be more focus on the story instead of explaining everything so newcomers can enjoy the game. This mechanic can also serve as a nice reminder for hardcore fans when he or she has forgotten the meaning of a word. 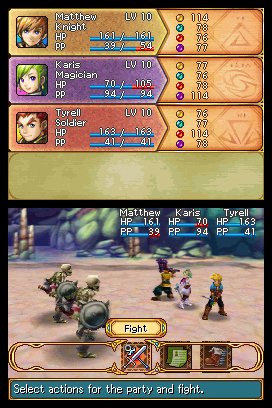 The gameplay, in general, hasn’t changed a lot compared to the GBA games. But in this game, some mechanics are tweaked for the newer hardware.

First of all, I want to talk about the exploration part of the game. The world this game takes place in is huge. I love exploring in this world. Since each town has it’s own unique feel to it.

The puzzles in this game are amazing in my opinion. The puzzles use the special powers you have in creative ways. I had to think outside of the box sometimes. And when you are stuck, one character gets a special power which allows you to see what objects you can interact with and which powers you should use.

Secondly, the battles are quite interesting as well. Since you have three possible attacks. You can fight with your weapons, use your magic and/or Djinn. Djinns are special creatures you find all over the world.

The mechanic of Djinn is one of the most interesting things in this game. I love trying to find them in towns, dungeons and in the overworld. But after you found them, a rather tricky meta-game starts. Depending to who you equip which Djinn, you can make a character even stronger or even weaker. Not only that, which magic powers they can use will also change. This makes for an interesting balancing exercise to make sure you have the perfect build to advance the plot.

When you use Djinn, they go into, what I like to call, the summing pool. When you have enough Djinn of a certain type, you can summon a more powerful creature. But beware, when a Djinn is in the summoning pool, the character it’s attached too, will lose its perks.

If this sounds interesting to you, this page on the Golden Sun wiki will explain it in more depth.

This world is golden

The presentation and design of this game are top notch. While some animations take a little bit too long, I have no other complaint.

The world looks colorful and really pops out. The visual presentation in this game is one of the best I have seen on the system.

There is one issue I have with the design. And that’s that the menu system can sometimes be very annoying. It’s difficult to explain, but I felt that could have been done a lot better with more traditional menus. An example is the inventory system. It’s quite messy in my opinion. When you are looking for example for some herbs and you forgot to which character you have given them too. But it’s something I got used to.

The music and sound design of this game are excellent. The sound design gives this game the right charm it deserves. And the music, well, I have the soundtrack in my music library and I play a track here and there. It’s a very nice soundtrack.

The controls are great as well. Since you can use both buttons and the stylus. So you can choose and use the playstyle you prefer.

This game isn’t easy but isn’t difficult. But, I will give my final verdict on that when I finish the game. Since I know that there is another DS game that is rather easy but the final boss is extremely hard.

Something that could have been improved in this game is the frame rate. In some parts of the game, I saw some great frame rate drops. It mostly happens when there is way too much happening on screen at once. But it doesn’t happen very often thankfully.

In any case, I think I said everything I wanted to say about this game for now. When I beat this game, I might write a review. I hope you enjoyed reading this first impression as much as I enjoyed writing it. I hope to welcome you at another article on my blog, have a great rest of your day and until then: take care and game on!