If you didn’t expect this game to get an article this week, you might have missed all my clues on Twitter. I was extremely hyped for this game and it’s finally here! This game has got a rocky development and it was almost canceled. For the people who don’t know this series, let me quickly introduce this game. This game is the 3rd installment in the excellent Zero Escape series on (3)DS and PSVita. It’s a horror visual novel game with escape the room puzzles. These games should be played in order to fully enjoy them. 999: 9 Hours, 9 Persons and 9 Doors was the first one. The second one was Virtue’s Last Reward. Both excellent games. This game is on the 3DS eShop, PSVita and also released on the PC. In any case, enough rambling in this introduction. It’s time to talk about this game and what I think about it. Was it worth the hype & wait or does it stink? Let’s find out. Keep in mind, I’m playing the 3DS version and I don’t own the other versions. Oh, and don’t worry, I selected the screenshots and wrote this article to be as spoiler free as possible. And as usual, feel free to leave a comment with your opinion on the game and/or the content of this article.

The story this time around isn’t about a nonary game like in the previous entries. While it isn’t 100% needed to play the previou 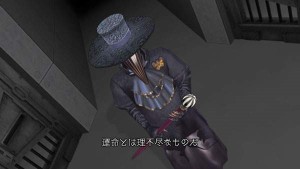 s games, but it’s highly recommend. Since a lot of references and explanations will be very confusing otherwise.

Something that I found really surprising is that this game isn’t linear, at all. You can play sequences out of order. You would think that this would make a confusing story, but thankfully… They thought about that. There is a story mechanic that helps playing this story driven game out of order.

I have played this game for a bit now and I’m nowhere near finished. The current plot points and twists I already saw were mind-blowing. The writing in this game is truly amazing. It pulls me into its world with ease. One time, I was so focused on the story, I almost missed my stop. I had to dash to get outside the train.

I’m really curious how the story will wrap up, since Virtue’s Last Reward ended with a huge cliffhanger. I’m looking forward to that.

The final thing I want to say about the story is that I’m really thankful that some terms and mechanics of the previous games are quickly explained. It helps me when I had forgotten something from the previous games.

In the previous entry, Virtue’s Last Reward there was a nasty saving bug. It was, as far as I know, only present in the 3DS version. It happened in one room and in certain situations. If you saved then, your save would get corrupted and you had to start all over.

Thankfully, Aksys learned its lesson and implemented three save slots in this game. But so far, I haven’t encountered any problems with saving. Also, three save slots make sense since you can play this game out of order.

The music in this game is very good. While it uses a couple of tracks from the previous game, the new tracks are pretty nice to listen too. The music feels similar but is unique too. It fits the scary and tense atmosphere the story is trying to set.

The sound design is pretty well done, I have no complaints there. So far, so good. The only complaint I have is that, on the default settings, the music overpowers the voice acting from time to time. But it’s easily fixed with putting the volume of the music a bit down.

Not so much reading anymore?

In the two previous entries, you could read everything. From time to time, it was more a novel then a game. But not in this game, almost everything is voice acted. The parts that aren’t voice acted are the dialogues inside the puzzle rooms.

I’m not 100% happy with that. Honestly, I’m 90% happy with it, but sometimes I miss the atmospheric writing that detailed how the main character felt or gave more details about the situation.

I have to praise this game for its voice acting. I’m playing this game with the English voice acts and they sound awesome! Sometimes, the emotions of the characters really shine through. I really felt that the voice actors really put a lot of effort into this game and gave it more than their best.

Something I think is the weakest point in this game is some visual issues. In some cutscenes, I felt that the characters were too static. I honestly think, that if Uchikoshi (writer / developer of the series) had more staff and money, it would look a whole lot better.

Also, some textures could have been polished up a bit more. For example, there is an emblem on one of the characters his shirt, and you can barely make it out what it is. Or in another scene, somebody looks at a carpet on the floor. When the camera looks down, I almost felt that they used the fill tool in a paint program. Or in some cutscenes, the hair or eyebrows of some characters are clipping with something. Which is a shame.

All in all, the finer details could have been polished a bit more. While the animations are pretty good, there is barely any animation where two people do something together.

Don’t get me wrong here, visually this game looks stunning on the 3DS. While some people found it a bummer that they dropped 3D support, I don’t mind. Apart from lacking some polish; the escape rooms, characters, cutscenes and environments look crisp and detailed. I also truly love the style they used in this game.

So, this game is still a puzzle game. The escape rooms are really challenging this

time around. In the previous games, I almost never got stuck in a room or on a puzzle. But this time around, some of  the rooms are real brain teasers in my opinion.

This game can be very difficult if you don’t see the solution to the puzzle. I do have to agree with the other reviewers, this game really lacks a hint system. Like the “Easy mode” in Virtue’s Last Reward, where some of your companion characters almost literally explained what you needed to do.

The controls of this game are very good. Apart from some minor issues I had in some rooms with the touch screen, I found that the controls were, like I said earlier, very good. A small piece of advice from me, I feel that the buttons work a bit better when you need to move the camera from point a to point b. When you need to press something finer, use the stylus. That’s the best way to play this game in my eyes.

From what I have seen, this game is a very long game. This is a very good thing, since this game has it’s hooks into to me.

If you have read my blog before, you know that I also like to talk about the UI/menu systems. Since I feel that they are important. The menu system in this game is almost perfect. Something that bugs me is that you can use the d-pad to navigate the general flow chart, but if you switch to the 2nd flow chart (where they display pictures of the event), you suddenly can’t do that anymore.

There was also one time that I had to input a few passwords that were said earlier. I forgot to wrote them down and suddenly I was unable to open the logs. So, I had to restart that segment.

In first impression of this game is pretty good. The game we got is amazing. Yet, the fact that this game was made by a small group shows its signs. I honestly think this game would have looked a lot better when they had a bigger team and a bigger budget. Maybe this game gets some polish with a patch or two. But honestly, I don’t think the game NEEDS it. Since it has a certain charm that I think would get lost.

@Uchikoshi, if you or somebody on your staff reads this… I have a message for you guys and girls. Thank you for creating this game. I bought it on day one and I’m really pleased with it. While there are somethings that could have been improved, the end result is an amazing game. I wish you girls and guys the best. Here is to a 4th game in the series or an equally awesome new project. I really love the series you made! If you don’t make a sequel, I’m hoping that you make a new game and/or series. I’m so looking forward to it.

I wish I could say more, but then I would go into spoiler territory. Also, I haven’t finished the game so my final opinion might change. I’m planning to write a full review when I have beaten this game. So yeah, I think I’ll wrap up this article here. I hope you enjoyed reading this as much as I enjoyed writing it. Thank you for reading and I hope to welcome you in another article. But until then, have a great rest of your day and take care!~