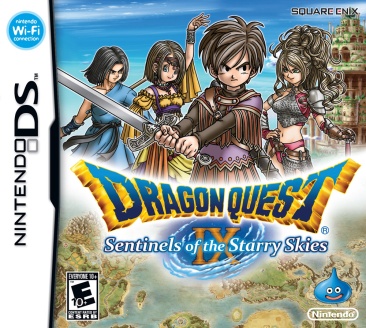 Lately, I’m playing a lot on my old Nintendo DS. The game that I’m playing is Dragon Quest IX. I have played this game right when it came out, but then I stopped because other games got my interest. I played this game right around when I started playing Golden Sun: Dark Dawn. In any case, this article will contain mostly my current opinion of the game. I’m currently 10 hours into the game. But, enough stalling. It’s time to talk about this game. And as usual, feel free to leave a comment down below with your opinion on this game and/or the content of this article. 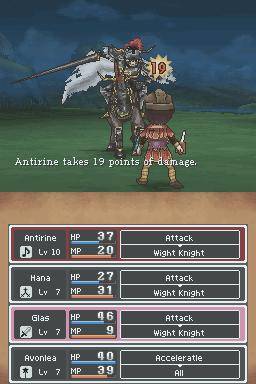 In this game, you play as a character you design and make yourself. Your character is a guardian angel of Angel Falls. At the start of the game, you get a small combat tutorial and introduction to the world.

Everything was peaceful until suddenly disaster strikes. Something happens in the sky palace and you fall down to the world and lose your halo and wings. You fall in the town of, you guessed it, Angel Falls.

After those events, a lot happens. The plot only thickens and gets quite interesting. Yet, the only negative is that the start is quite slow. I was 2-3 hours in before the main quest started.

The writing is very well done. The characters are memorable. While I noticed some minor spelling mistakes here and there, I didn’t mind them too much.

The story feels episodic. When you finish one quest, another path opens and you go to another village to go on a new quest. This works very well in this game. This game is pretty long. If you want to beat the main story, you will have to put in around 50 hours. So, I’m looking forward to the stories I still have to play.

In any case, enough talking about the story. The difficulty of this game is almost a negative in my opinion. If you have read my blog before, you might know that I don’t like grinding for levels that much. It gives the impression that the game is longer then it actually is. This game contains some grinding, but it isn’t too bad. But, the grinding gets old real fast for me.

Buy and wear this shield

In this game, there is something that really every RPG should do. When you buy new equipment, you see your character visually change. Not only in battle, but also in the overworld. This is a great touch, since it gives you the feeling of progression and growth of your characters. I can understand that this could be annoying to some people, since they prefer everything to look a certain way. But I honestly like it.

Visually, the characters and enemies look very well designed. Sadly enough, this RPG suffers from what I call the “multiple paint bucket syndrome”. There are various recoloring of enemies to make new enemies.

While I can understand that it’s hard to always make new enemies for each new area, I believe there are other methods. If you give the recolored version some minor visual changes like make them longer, shorter, wider, bulkier… That would go a long way.

Or you use the same enemy, but you buff them up. Wait, scrap that. Game design wise, this wouldn’t be the best solution. Since that could confuse a lot of players.

So, we were talking about the visuals of this game. The world design is something that is deserves praise. Every area has charm and feels alive. The animation is stellar. In short, I really love the presentation of this game.

One thing to note is that in some battles, I experienced some frame drops. This happened mostly when there were a lot of graphic heavy attacks in a row. Outside of battles, I rarely got slowdowns or frame drops.

You have two options in the control department. You can either use the touch screen for everything or you can use the buttons. Both control schemes work every well. The only feature you miss in the touch screen controls is the ability to swing around the camera a little bit in the overworld. But I rarely use it, so I don’t mind it that much.

This game is a full blood RPG and it has a big world for you to explore and adventure in. A big plus in this game is that you can see the monsters running around on the overworld. This makes it a lot easier when you need a certain item drop or when you need to defeat a certain enemy to complete your monster index.

You can design your own party in this game. You can tweak your party to your heart’s and playstyle’s content. Take your perfect party in to battle!

I can only say one negative thing about the battles. If they would added a health bar for the enemies, that would be amazing. I found it very frustrating that I had to hope that a boss died when I was at low health. It would be very handy to change your tactics.

There is just too much

In this game, there are also side quests. I haven’t done many side quests, so I won’t go in-depth. But you can get a quest from a character when a blue speech bubble appears above their head. Most quests I encountered are fetch quests.

The music and sound design in this game is good. It could have been better if there were two or three more tracks in-battle. Since always hearing the same battle music gets a bit old. It’s still a great track, but I wished I heard some other battle music in normal battles from time to time.

In this game, you can only save in churches. You can quick save, but the quick save gets deleted as soon as you restart the game. I don’t know what happens if you quick save and then don’t save. Honestly, I don’t feel like finding that out. One thing, there is only one save slot.

In any case, I think I said everything I wanted to say about this game. Besides, if I forgot certain things, I will talk about those if I ever review this game. So, it’s time to wrap up this article.

I highly recommend this game if you are looking for a challenge, a big adventure and/or an interesting story. But be prepared to put a lot of hours into this game.

I hope you enjoyed reading this article as much as I enjoyed writing this. I hope I can welcome you in another article on my blog. But until then, take care and have a great rest of your day!