Today, I’m taking a look at a new Android game called Galatic Warrior. This game has been developed by two brothers from Spain. It started as a hobby and after seven months, this is their result. I have to applaud them since game development is hard. So, they mailed me and asked to give my opinion on their game, and as usual, I’m going to give my 100% full opinion on this game! Also, feel free to leave a comment on this article with your opinion on the game and/or the content of this article.

For a game that’s developed by mostly 2 people, this game looks amazing. The visual presentation of this game is top notch. I really love the artwork in the game. The only minor complaint I have is that the current icon isn’t in pixel art.

The UI of this game is very easy to use. I only have one minor complaint about it. When I’m in the upgrade menu during gameplay, the buttons in the settings tab and the shop tab overflowed at the bottom. The other minor complaint I have is that in the credits menu, the Twitter icon looks ugly in my opinion due to the bird not looking right. But, that’s nitpicking in my opinion.

This game controls quite nice. The only advice I would give to the developers is making an option to flip the buttons. What I mean is that the joypad is on the right side and the attack buttons on the left side. I think left-handed people would be happy to see that feature.

This game is fun to play in short bursts. To play one quick round and try to earn some coins to upgrade your character. This game also auto-saves, so no worries about loosing progress. Your goal is to kill all enemies that come to you in waves. They get spawned in random places in the area. When you kill an enemy, you get coins that you can use for upgrading your character.

You also keep your gold when you die. That way you can grind yourself to better armor and gear in order to better survive the arena.

There aren’t too many ads in the game. This is a big plus in my book! I know that it’s one of the only ways to earn money with your product, but if you overuse it, gamers can get turned off. Thankfully, this isn’t an issue in this game.

This game is still in development, so that means that each negative I say can be improved in future versions. The developer told me that they aren’t only creating more content for the game but also working on improving the game.

This game has achievements that let you earn XP for your Google account. Neat. And the XP you get is quite a lot, and you can earn each achievement by playing the game. 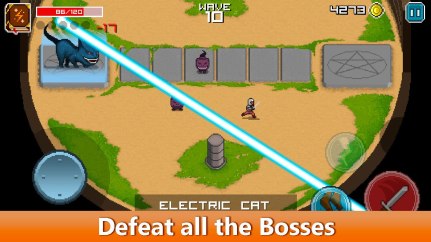 The opening story always plays when you boot the game. I know you can skip it, but I think that this should play when you start a new game. And only once.

The difficulty in this game isn’t the best. In my playthrough, I wasn’t able to beat the first world after trying each level at least 20 or more times. I think the following suggestions would help to fix this issue:

I know that this game should be hard, due to the story and setting of the game. The story goes like this:

“In year 2370, when fighting in the arena was universal sport, a boy from planet Earth dreams of fighting in it. He wants it since he was a child, he admire great fighters like his father. But since the day he became 18 years old… he could fight in the arena! It was time to carry out his dream…”

But, this shouldn’t mean that this game should have a very steep difficulty curve. Ease the player more into the game, so this way they get more interested in the game.

Something I think this game really lacks is a total wave counter. When I played the first level, I kept continuing in waves and I never know when the level would end.

So, should you play this game? In my opinion, yes! At the current version, the game lacks polish in the difficulty curve and some very minor issues. But, like I said, the developers are still creating more content for the game and they are going to improve it. So, the game can only improve from here. Also, it’s free! So, you don’t have anything to loose!

There is a lot of potential for this game to become a very good game. The current version (v0.212) I played isn’t even finished. Also, the development is quite active of this game, the last update releasing on the May 30th. I’m really curious to see how this game is going to develop. I’m going to keep an eye on this game and play it again when the game reached a future stage in development.

If you want to follow the development yourself, here are the links:

In any case, that’s everything I wanted to say about this game. Thank you for reading this article and I hope you enjoyed reading this as much as I enjoyed writing this article. I hope to be able to welcome you in another article on my blog but until then have a great rest of your day and take care!