Today I want to take a look at a game still a challenging game called U.A.U.I.M Challenge. The first version of this game released a month ago and the developer asked me to take a look at the game. So, that’s why we are here. In order to be able to review this game, the developer gave me a review code for this game. I played v0.5 for this review. Let me be clear on one thing, this article is my opinion about the current state of the game and is my opinion alone. As usual, feel free to post your opinion on the content of the article and/or the game in the comment section down below.

So, before we continue, what is this game? This game is a pretty challenging top-down shooter. You can compare the gameplay to games like Galaga, 1942 and other games like that.

The “this is going in the right direction” things 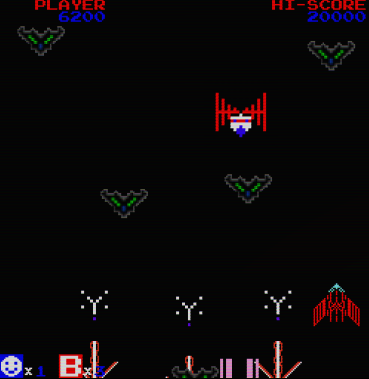 Let me first talk about the good points of this game. I think that the sprite work is going in the right direction. While I wouldn’t call it 16bit, I remind me more of the old days of Atari and very early NES games.

If the enemies will get the same level of animation that your ship has, I have high hopes for the animations.

The controls work pretty well. I have only one nitpick. I think it’s quite strange how you are unable to pause the game using an XBOX controller. I really tried every button and I wasn’t able to pause the game. Oh well, thankfully the “ESC” button on my keyboard wasn’t too far from my reach. Also, thank the lord for auto-fire!

The game really delivers on its name. The game isn’t easy. Thankfully, with some practice, you can get further and further into the game. This game is all about memorization and knowing which ships come next. That’s why I’m so glad I have infinite continues.

Something I really like in this game is the different “skins” you have in the game. You can change the “CRT mode” in the game to five different modes and you can change the brightness of the game by just a button press. As a retro game enthusiast and collector, I’m really happy that things like this find their way into modern games. 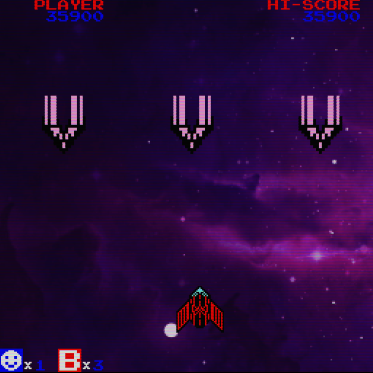 The scoring system needs some polishing. First of all, I would love to see enemies display their score value when they die. Like right after they die, you quickly see how much points you got from killing them.

Secondly, it would be nice if there was a high score table with a date when you reached said score. Something that would be even more awesome if you had the ability to share this online.

And finally, I think that the “High-score” system is bugged out. Each time I start a new game or use a continue, the player score resets and the high score too. That’s something the developer should take a look at.

While the UI in this game is pretty decent, I was pretty close to putting it in the good department until I reached the section you see in this screenshot above this paragraph. It’s really hard to read the score when you use a dark blue colour on a purple background. I think it would be easier to read if you make it white instead of blue. In addition to that, I think it would be pretty helpful if you made the font in the main menu a bit bigger. When I wasn’t sitting close to my screen, I wasn’t able to read it very well.

One minor detail that you should add is a “Are you sure you want to quit” dialogue when a player selects the quit button.

While I was able to arm myself with a bomb, I was unable to use it or to figure out how it works. But this will be most likely added in a future release of the game. It would be interesting if some rare enemies drop more bombs.

There are three things that could improve for the future versions of this game. The first thing that I would focus on is the soundtrack. To be honest, I really didn’t like the music. The sound effects are fine, the little jingle that plays when you start the first level isn’t good.

The game could use some more sound effects, to be honest. It would be helpful for the player when the special flame arrows are shot, a special sound effect plays.

The second thing that I didn’t like too much about this game is some wallpapers. I think that the current assets that are being used don’t fit the theme at all. The game gives off a space/industrial vibe to me and most of the backgrounds are more generic ones. Keep the backgrounds a bit more consistent.

The third and final thing that I would change is the difficulty curve. While the game is supposed to be challenging, I had a long time to pass the first level and I got pretty frustrated and stopped playing the game for a few times. I think this game could benefit from more gradual build up instead of being extremely hard from the first few minutes.

If I may be honest, I think that this game is held back by the engine it’s programmed in. When I talked with the developer about the first version of the article, he told me that various things I recommended weren’t possible with the engine.

I think that the developer has some nice ideas that are present in this title, but I think it would be better if the developer used another engine that allowed more freedom. Something like YoYo GameMaker or Construct.

I think that this game can become a better game if it would be rebuilt in an engine where the developer has more freedom to control more elements of the game.

At its current state, the game is pretty rough and needs more polishing before I can recommend it to other players.

But, I think it would be a nice idea to take a look at this game and give your feedback to the developer. Since, I think that this game can become a nice indie title if it gets some more development and gets a bit more polished up.

If you are interested in what you have seen and read, go ahead and buy yourself a copy from the official website. Otherwise, wait a few months until the game got some more development and give a try again then.

So, that’s everything I wanted to say about this game. I hope you enjoyed reading this article as much as I enjoyed writing about it. Thank you for reading my article and I hope to be able to welcome you in another article on my blog, but until then take care and have a great rest of your day!

So, today something special starts. A collaboration with my friends from LaterLevels about Christmas. For the upcoming days, I’ll post an (short) article every day apart from the 24th and 25th. In these article’s, I’ll answer a question asked by LaterLevels. Keep your eyes peeled on this since a lot of other bloggers are joining in! I’ll be retweeting other articles that I come across. In any case, I think it’s enough stalling here. Time to get into the first question!

Question: You need to choose a gift for someone special and go online to check out the video game item catalog. Who is this person and what present would you select for them?

This would highly depend on the person I would choose. You can take the “special someone” in such a broad way. At this moment in time, I’m a single man, so I can’t buy a gift for my significant other.

If I would take some coworkers who would mean a lot to me, as the “special someone” in this situation, I think I’ll come up short handed with the second part of the question. As far as I know, none of my coworkers is really that into gaming, so a gaming related gift wouldn’t be suitable.

The same thing goes to almost every member of my family. Apart from three people. First is my sister. She plays games but very occasionally. She plays games like League of Legends, The Sims, Rollercoaster Tycoon and a few others. But, it isn’t her main interest. Besides, a few years ago, she gave all her games to me to add to my collection. So, let’s go to the second person.

That would be my uncle. He plays a lot of stealth and country management games. When he has the time, he boots up a game and starts playing. Keyword being time here. My aunt and uncle got a daughter a few years ago and his focus goes more to his daughter then to video games. I see him rarely online on Steam and he mostly plays Assassin’s Creed or GTA. I think that the 3rd person who plays games in my family would be more happy with a gift actually.

That would be my cousin. While she does play games from time to time, according to me, her favorite gaming moments are the moments she shares with me. Together we played through so many different games. We played games like BoomBlox (Wii), Kirby’s Adventure (Wii), Mario Kart 8 (Wii U) amongst others. Often she likes to watch me play games, that she finds too difficult to play herself. I commentate over them and let her make the decisions here and there.

She also loves taking a look at the games in my collection and when she sees a game that she really likes, she wants to buy it for herself.

A few years ago, I bought her a copy of Minecraft for the PC. And let me be real here, I can’t keep count anymore for how long we played Minecraft together. The annoying thing is that her laptop isn’t that powerful so she has to play Minecraft at the lowest setting to be even playable.

If I would have the budget, I would love to buy her a laptop that can run Minecraft better. Why a laptop? Well, since she would love to take her creations everywhere she goes without having to save her worlds somewhere on a USB or in the cloud. She isn’t that tech savvy and just buying a laptop would make that easier.

I could also buy her a NEW 2DS and a copy of Minecraft on that. I think she would be extremely happy with that too.

So, why would I gift something to my cousin? Why is she so special to me? I’m her godfather after all and I want nothing more for my godchild that she is happy and has a great time.

That’s my answer to this question. Tune in tomorrow for another question! Also, keep an eye on LaterLevels, since they are going to show an overview of all the answers.