Back in the day, when I just got the Nintendo DS, I decided that I wanted to try out a horror game. Castlevania was one of the only horror game series I knew about so when I saw this game on the shelves, I decided that I had to have it. Now, I have never really beaten this game, but recently I returned to it. I wanted to beat this game. Now, did I just want to relive a nostalgic game or did I really want to beat this game since I was having so much fun? Let’s take a look at this game and give my opinion about it.

No Stars For Mario

In this game, you play as Jonathan Morris and Charlotte Aulin. They are childhood friends who are going on a journey to protect mankind from evil. When an evil vampire artist revives Dracula’s Castle, the duo springs into action.

There is also an interesting twist in the story. Notice that I started explaining the story with the last names of the characters. Now, look to the cover-art and you might notice that Jonathan wields the legendary vampire-killing all evil defeating, Master Sword… whoops, wrong series. I mean, the Vampire Killer.

But Jonathan is part of the Morris family, the son of John Morris from Castlevania: Bloodlines, and not a Belmont. So, he can’t fully use the abilities of the Vampire Killer.

Now, the story looks like your generic Castlevania story at first, but the more you go into it, the more complex it gets. Most of the story is told through in-engine cut scenes and dialogue boxes. The “voice acting” in the game are various grunts and sounds to give the story more “oomph”. There are spoken lines in the game, but those are mostly sound effects or lines spoken by enemies during combat.

I actually don’t mind that the story isn’t voice-acted. The only thing I really miss is a sort of log. To keep track of what story elements happened. Since, when you pick this game up after a few months and don’t remember where you left off; well, you are going to have to spend time to find out where you need to go.

Which is, on the other hand, not such a bad thing. The difficulty in this game is pretty high for people who aren’t used to this style of gameplay. So, exploring the castle is a great idea to level up Jonathan and Charlotte.

I find the story really interesting and it actually motivates me to try to beat every monster that comes my way. If you decide to play this game, I really advise you to put a lot of time into exploring and learning how each and every enemy works. Also, there is no shame in avoiding enemies, but do know; if you do that, you will have a lot of trouble with bosses.

So, I’ll go more in-depth about the bosses in a moment. But first, I want to talk about paintings. Since the main antagonist is an evil vampire painter, you discover various paintings in the castle. These transport you to various locations where you can advance the story. There are no “missions” like Super Mario 64. When I played this game back when it was released, I was convinced that there was an easter egg where you could jump into a painting and come out in a sort of corrupted version of Princess Peach’s castle. Yeah, my childhood imagination is interesting, to say the least. 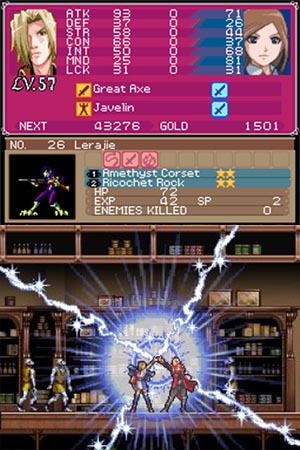 If you can’t tell from the screenshots, the game looks amazing. To this day, I find this game one of the best-looking action/adventure games on the DS. The details in the background are what I find the most impressive in this game. The world really feels alive.

I find this game not that scary. There is a lot of gothic and mythic imagery, but the game doesn’t get under my skin. On the other hand, I wouldn’t give this game to younger kids. There are some bosses that can cause nightmare fuel to young minds.

Like the boss in Land of the Fools. I won’t spoil it, but I can see how this can become a nightmare fuel. If you can stomach basic horror elements, you will be fine.

The atmosphere in this game is just amazing. I really like how all bosses are based on real-life myths and various enemies have an interesting spin on them. Together with really nice looking animations and rarely a dip in frame-rate, you can’t complain.

Personally, I like to have a map on one of the screens. The map is extremely handy to have. The blue squares are teleports, the red squares are save points and the yellow square are paintings or locations of extreme interest. The only thing I really miss is that you are unable to place any notes on the map. A feature where you were able to pin locations like in The Legend of Zelda – Link Between Worlds would be been such a blessing. Since some areas contain loot that you can only access with a certain ability, and marking them would be a great way to support your mind.

Speaking off abilities, some require you to control both characters. With just a press of the button, you can switch between the two. When you are playing as Jonathan, you switch to Charlotte and vice versa. Now, for some reason, I find it pretty enjoyable to switch between both characters. They shout each other’s names each and every time. I’m sometimes easily amused.

You can also have both characters on-screen. The AI to control the other character is decent but sometimes makes some pretty questionable decisions. You can also use the support ability to avoid more damage. While this sounds overpowered, know that the damage to the 2nd character also counts! So, yeah. Be careful with that.

The castle and such

If you have played games like Monster Tale and Metroid, you know what you are getting into. This adventure isn’t that long, it can be beaten in an afternoon if you really know what you are doing. Yet, I’m not that good with the combat, so I think it will take a bit longer.

Currently, I think I’m halfway done with the game. I have died quite a lot in this game, but each time I’m making a bit more progress. The biggest flaw in this game is how slow you go from the game over screen back into gameplay.

You get a “Game Over” screen with a barely readable font, that slowly fades into the main menu. Speaking about the main menu, you might find some interesting features there. The only thing I’ll say is that there is a boss rush mode that might help you in the main storyline.

Yet, there are a few things that aren’t that good in this game. First of all, you can only attack sideways. You don’t have an attack to hit smaller enemies easily. Unless you use a weapon like a mace. You can’t attack the top of you either. This caused a lot of unneeded damage.

Actually, that isn’t really a flaw in a way. It’s choosing the right weapon for the job. Now, if only you could swap between weapons a bit easier, this wouldn’t be such a big problem.

There are a lot of neat touches I really enjoy. The fact you can an opening and closing sound-effect when you open or close the DS is one of them. Another one of them is, how the interface changes to blue when you are equipping items and armor to Charlotte and to pink for Jonathan.

All-in-all, this game is really solid. If you are looking for a challenging Action/Adventure RPG on the go, I can’t recommend this game enough. I’m glad that I picked up this game again since with the skills I have now, I’m able to beat parts that I had a lot of trouble with as a child. This game is a blast to play but can be very frustrating too when you die over and over again.

Before I close off, I hope one thing. If you are interested in this game; don’t let the publisher’s name scare you away. This has been published when Konami’s reputation was a bit better.

That’s everything I wanted to say about the game for now. I’ll go a bit more in-depth about the other aspects when I review this game. But, the review will only happen if I beat this game one day.

Thank you for reading this article and I hope you enjoyed reading it as much as I enjoyed writing it. I hope to be able to welcome you in another article but until then, take care and have a great rest of your day.

9 thoughts on “First Impression: Castlavania – Portrait Of Ruin (DS) ~ No Stars For Mario”