Last week when I was writing about Castlevania: Portrait of Ruin, I wanted to reference Monster Tale. To my surprise, I haven’t written a review or talked about this game in full on my blog. So, that’s why I’m going to fix that right now. Let’s tell the tale on one of the best Nintendo DS games ever made. As usual, feel free to leave a comment in the comment section down below about the content of this article and/or the game. For now, let’s ready, set, go!

Are you ready, Chomp?

In this game, you take the role of Ellie. A young girl that gets dragged into a world filled with monsters. It doesn’t take long before she meets a monster that hatches right in front of her and follows her around as if she was the mother. She decides to name the monster Chomp.

Then, Jinx, a shopkeeper explains what the world is.  There are other humans in the Monster World and they are king of their own domain.

Now, Ellie and Chomp go on a quest to try and defeat these evil Kid-Kings and try to get them all home.

The reason I stay pretty vague about the story is simple. This game is a very nicely written plot and talking about it more would spoil it. The characters might be cliche here and there, but I really liked the chemistry between the characters. To this day, I still remember the characters and their role in the story by just looking at screenshots or hearing their theme.

The story is a blast to experience from start to finish. All 10 hours of it. Yes, all 10 hours of it. This game is criminally short. You can squeeze a few more hours out of the game when you want to fully complete it.

There is voice acting in this game, but no full lines are voice acted. Some of the major characters have some spoken phrases or noises but nothing really more. Which is a darn shame since the whole voice cast is extremely talented amine dub voice actors. On the other hand, it helps with the charm that this game has quite a lot.

I especially love the grunts of Ellie and the noises Chomp makes. They are so adorable and made me fall in love with this game. It’s still a mystery how the adorable and cute game can tackle serious subject matter like what’s presented in this game. So, I hope that you are ready since you and Chomp are going on an adventure.

Back when I first played this game, I hadn’t really played a lot of Metroid or Castlevania games. I had heard about both series but I haven’t played them. That all changed when I started to play this game.

The gameplay is your typical Metroidvania game. You explore this world and fight monsters on your way. Don’t be fooled by the visuals, this game isn’t easy at all.

This game is unforgiving sometimes and you really have to learn how each move works and how to use the special items provided to you.

This game has a lot of depth as well. There are three enemy types; fire, water, and earth. These work on a rock, paper scissors theme. So, you will have to keep in mind which version of Chomp you level up and bring with you. Yes, you can level up Chomp. While it’s not 100% needed to unlock all versions of Chomp to defeat the final boss of the game, it’s highly recommended that you level up at least one form quite a lot.

During combat, enemies can drop various items like footballs, books, slingshots, ice cream, camera’s… to help Chomp level up. Some dropped items even have additional benefits, like the football bounces around on the top screen.

Now is a good time to address the top and bottom screen, since it’s used in this game to its full potential. On the top, you have the Monster World that Ellie is exploring. You can have Chomp with you for a limited amount of time. That’s what the yellow bar on the 2nd screen is for. This bar drains as soon as Chomp is in the Monster World.

You can let the bar recharge when Chomp is resting in his den, which is the bottom screen. Once there, the bar recharges and he can experiment and learn about the various items that enemies drop. There is also another catch, each version of Chomp has different attributes, abilities and special powers to play around with.

Now, I love the risk and reward system of combat. There are a lot of ways to handle the situation. One possible option is to let Chomp handle the enemies. Another possible situation is to shoot the enemies down and another is to melee combat. Now, you would argue that the melee combat sounds useless. Well, I would agree with you there but there is a limit to your shooting ability. When the 2nd bar on the 2nd screen, the blue one, depletes; you can’t shoot anymore. You can recharge this bar at save points or by finding rare blue orbs in the world or as drops. But the easiest way is to melee defeat enemies.

Now, there is a lot more done with the mechanics of the two screens and I have to tell that I really liked it. The combat is extremely challenging to do but in a fun way. Also, no playthrough feels and plays the same since you have so many different ways to tackle the situation.

In addition to that, you never get lost on what to do next since the next spot you need to go to is always indicated on the map. I have no idea if there is an option to disable this, but I think it’s a very useful feature.

Gameplay-wise, this game is extremely addictive. There are a lot of power-ups for Ellie and various forms for Chomp. So, this game quickly becomes a balancing act on who to power up with your hard-earned cash. Do invest in both, since otherwise, you will regret it later.

Control-wise, this game is solid. While in very few occasions, the ground pound move was a bit tricky to pull off, but that was a minor annoyance. Since, when you die in this game, you get quickly put back to the latest checkpoint. Now, if there is one thing I really disliked in this game is the lack of teleports. 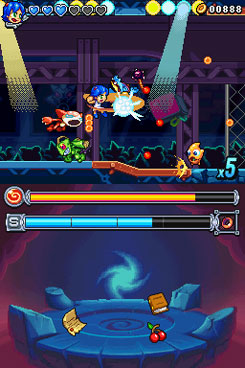 So, this game doesn’t have an autosave. At certain locations, you come across a book where you can save. There, you can recharge every meter to it’s fullest potential. These rooms are highly needed since the lower your hearts, the more tricky this game can become.

Something I will never get tired of with this game is the presentation. This game looks amazing. It’s clear that a lot of love has been put in the creation of this game. The backgrounds of each zone look stunning, vibrant and have a lot of detail.

The colors pop and they build an amazing atmosphere. I especially love the beach zone since it has a lot of memories for me. As a kid, I took a lot of trips to the seaside with my family and I love to sit on the beach and watch the sea do its thing.

Besides that, the monster design is adorable. In some cases, I didn’t even want to hurt the enemies. They all have unique designs and patterns, it’s tricky to kill them. Both since they look so good and some have very unique killing patterns.

Now, the soundtrack of this game is good. While there are some tracks that I find mediocre, the overall package is a blast to listen to. It really pumps you up to continue. You won’t regret hearing these tunes during gameplay and even outside. I played the soundtrack in the background while I was writing this article and I actually heard the various enemy noises and the various other sounds in my head.

This proves that this game has an amazing audio design. To this day, I still remember sound effects and music from the game. And that’s what I mean with that this game will leave a visual impression on you. The game is not only pretty but also sounds pretty.

The animations are fluid and the game runs at a very stable frame rate. I actually don’t remember the game ever dropping frames. Also, I really like how there are two save slots. This way you have tried for two very different runs.

In terms of the UI, there is one minor thing I have to complain about. It’s actually extremely nitpicky but I really find the use of the start and select buttons to switch between the menu’s a bit too much. The start and select buttons on the DS Lite are extremely small. Besides, I wished they merged the map screen and the other menu into one option. Maybe an ability to select from the pause screen if you wanted to see the map screen or the evolution screen of Chomp.

So, that’s everything I wanted to say about this game. I left a few things unexplained for when you are interested in giving this game a chance. You will be surprised. But, it’s time for the section of the review of the people who need a tl;dr. Time for the conclusion!

-The pause menu could be reorganized a bit better.

-The harsh difficulty could be a turn off for some people.

-The game is really short.

-No teleporting in the game.

If you highly enjoy the 2D Castlevania games, the Metroid games or any other Metroidvania game and you are looking for something more light-hearted, then Monster Tale is your game. This game looks and sounds amazing.

Besides a few minor flaws, this game comes highly recommended. It’s a big shame that the remake for 3DS actually fell through and that the original developers of this game went bankrupt.

If you see this game for sale, pick it up and play it. It’s one of the best games on the DS. I wish more people knew about it so another developer could pick up the IP and make a sequel to it.

On the other hand, the ending wraps up things extremely nicely and makes for an amazing package. Due to the various possible playstyles, this game is highly replayable. But, it’s the complete experience that will stay with you. And that’s what makes this game so memorable and unique.