From time to time, I enjoy trying out cheap games. Especially when I have some budget leftover and I see a game that looks interesting. That’s why I agreed to write a small review article on Island Maze for the Nintendo Switch. It’s a game Drageus Games developed themselves instead of porting the game over. So, let’s take a look at this game with the review copy that the developers provided. Now, in this review, you will find my 100% honest opinion on the game but feel free to leave your opinion on the game and/or the content of this article down below.

This game is quite easy to grasp and has an enjoyable concept. The idea is that you get to the goal in the least amount of moves possible. The catch is that you can’t move over a colored tile without the correct gem. So, you have to think about how your dice is going to move over the field before moving.

Now, the game might seem to limit in the controls department, but you have a lot of helpful tools at your disposal. You can rotate the camera, zoom in and out and even undo moves. You can also reserve the camera’s direction when it doesn’t feel right to you to control.

This game allows you to skip levels. Whenever you are stuck on a certain level, you don’t need to play that level. When you complete 10 levels with the least amount of moves, you unlock every level.

The music is quite relaxing. It fits the atmosphere of the game amazingly well. Together with the amazing visuals, the game looks and sounds amazing. Maybe a bit more sound effects would be nice but then again, I think I would get sick of the dice rolling sound effect extremely quickly. Maybe one or two sound effects in the menus would be nice.

There are a few glaring issues in this game that I want to address.

The first issue is that the undo button only works for one move. So, if you noticed a mistake that you made ten moves ago, you better restart.

Secondly, there is no hint system. So, when you are stuck on a level, there is no way for you to know more. So, if you don’t understand a new mechanic right away… You will have to experiment.

For some reason, the “-” button brings up the controller connect menu of the Nintendo Switch. This serves no purpose in the game at all.

The naming of this game is a bad decision. If you Google: “Island Maze”, the results are mostly the island mazes from Breath of the Wild. If this game was a simple hobby project, I wouldn’t mind it too much. But, I think that in future the developers should pay a bit more attention to the naming in case they want to promote their game online more easily.

This game has been out for a year on Steam. Compared to the Steam version, which is a tad bit cheaper mind you, nothing has been changed. I think that after a year, the game could use some new levels and mechanics to give the game a bit more depth. 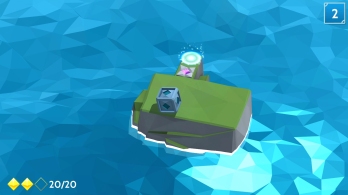 This is a good game, but it’s on the wrong platform. The audience for the Nintendo Switch isn’t an audience for quick and short casual games like this game. I think that the game would be better suited for mobile platforms. I felt that touch controls would work better for this game. Honestly, the game gave me that sort of vibe.

Apart from the broken undo system, I don’t see anything wrong with the game. This game is a cheap and enjoyable puzzler that can be entertaining for a rainy afternoon or when you are waiting for the doctor or when you are traveling on the bus or something of that nature.

I’m just a bit sad to see that this game is so short while the concept has a lot of promise. I enjoyed my time with this game but I wouldn’t blame people when they get bored with this game or skip it.

And that’s everything I wanted to say about this game. Thank you so much for reading this article and I hope you enjoyed reading it as much as I enjoyed writing it. I hope to be able to welcome you in another article but until then, have a great rest of your day and take care!