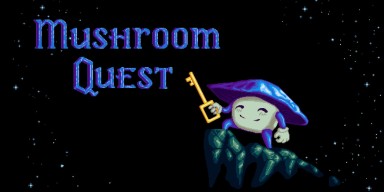 Previously, I took a look at Pixel Gladiator from Flying Island Team. Now, this developer created a second game called Mushroom Quest. Drageus Games ported this game to the Nintendo Switch and gave me a free press code to give my 100% true opinion. Now, I found some enjoyment in Pixel Gladiator but I found it too rough around the edges. Did the Flying Island Team create a better game with Mushroom Quest or did they fail in creating a good game? Let’s take a look at Mushroom Quest v1.0.0 for the Nintendo Switch.

The controls of this game are almost perfect. Moving your character is quite easy. You can touch the sides of the screen to move the mushroom in that direction but you can also move the joystick or the arrow buttons to move the mushroom. Now if only you didn’t had to press the button every single time you wanted to move, that would be glorious.

When I heard the menu music, I was a bit scared that we would have a Sweet Witches situation on our hands. But the music that plays during the levels thankfully matches the visual style quite well. The sound effects of this game are also quite cute. While there aren’t a lot of sound effects, the sound effects that are present do their job perfectly.

The visual presentation of this game is also well done. The game has a big charm to them that pulled me into the game. The only thing I disliked is the text that displays during a game over. The sad kitten eyes of your mushroom character with: “heey~” are just a bit too much and/or misplaced.

The level design is good. Some puzzles really made me think and try again and again. This game can be a bit addictive because it has that: “I’m going to give it just one more try”-attitude to it. 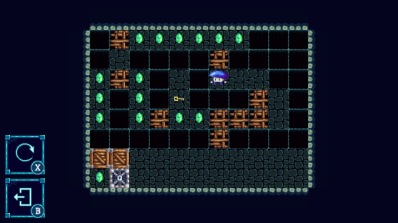 There is no undo button. So, if you make a minor mistake, you have to restart the whole level. This is quite annoying since some levels can be pretty precise with your movements.

The store page of this game promises innovate features into the classic block moving game. And I’m sorry, I had seen almost every feature done before. And not once, more than once. Please, don’t be fooled by the marketing of this game. I found the marketing write-up of this game just a bit cringe.

I found the level select screen a chore to use. What’s wrong with putting your levels on a horizontal line? Why do they have to be on a vertical one? In addition to that, just like Pixel Gladiator, this game is lacking in basic features. Apart from deleting your save file via the Nintendo Switch menu’s, you have no way to reset the game.

There are so many different languages in the game. I found it quite ugly that the visual style was broken up by the different fonts used for certain languages. But, why so many? I mean, they could have saved a ton of time by simply creating buttons instead of buttons with text. The game has so few text, it’s a waste of time adding those features in my opinion.

Not only is the game quite short with only 30 levels, there isn’t much variety in the game. To be quite frank and honest, I didn’t get past the 15th level because I felt bored with the game. Maybe this game is more enjoyed in short play sessions but then again, I don’t think I’d finish the game.

Apart from that, I also got a bit fed up with minor imperfections of the game. Like pressing the “B” button in the level goes back to the main menu instead of the level select, the reset button works instantly during levels but it only works after the fall when you are falling… And that are just two examples.

I would recommend this game to everybody who is looking for a cheap casual puzzle game or people who enjoy small games like this one. While I honestly believe that this game would be better suited for mobile platforms, the game has been released on the Nintendo Switch and Steam.

I don’t enjoy nor like giving a game with this much potential and promise such a low score but I just think I have to. With this low score I just want to say that creating a game where some basic features aren’t present, the game really suffers as a result.

The annoying thing is that some of the missing features can be added with a patch. If the developers are working on a patch, then my wishes are more levels and more features. Also, polish up the game just a bit more that there are no more imperfections and then I think this game would be a ton better.

With that said, I have said everything about this game I wanted to say. I want to thank you for reading this article and I hope you enjoyed reading it as much as I enjoyed writing it. I hope to be able to welcome you in another article but until then, have a great rest of your day and take care.