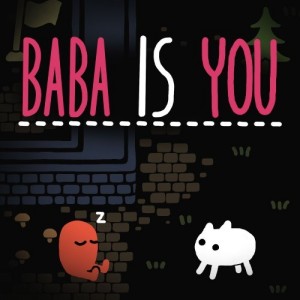 So, what if a game developer falls in love with the game he created for a game jam? Well, some of those developers make their game into a fully-fledged game like the developer behind Baba is You. Arvi Teikari created the basic concept for this game for a Game Jam. The Jam version is free, but for a more expanded version, you have to pay around 15 dollars. But, is this puzzle game worth your time or was it better as a Jam Game? Let’s take a first impression and quick look at the game that has been released on PC and Switch. The version I’m reviewing is the Switch version.

One of the main reasons I’m writing a review for this game in my game quicky style is because this game doesn’t have a story. So, I have less to critique which makes for a shorter article. But, why am I mentioning this with the good points? Well, that’s simple. The lack of a story in this game is actually a rather enjoyable thing.

Since this game is a really meta puzzle game, writing a story for this game would be a huge hindrance. It would be too silly or it would take itself too seriously. Also, it puts the focus on the unique gameplay of the game and that’s all that matters.

The gameplay of this game is extremely addictive. The idea of this game is that you finish the level by hitting the object that “Is Win”. So, how do you that? Well, by manipulating almost everything in the level. You can see the basic idea at work in the gif I attached to this article (source: official website of the game).

As long as you make real sentences, the game will act accordingly. Now, there is no real tutorial in the game but the game is divided into sections. The first few stages of a level are introductory levels to the mechanics that the level is going to use. And, these training levels are needed since this game can get pretty challenging.

Mark Brown from Game Maker’s Toolkit explained how smart this game is in his video where he praised this game as his most innovative game of 2019. And I have to agree, this game challenges the most veteran players to finish each level. And sometimes the level is stupidly simple while you look over the solution multiple times. It’s such a rewarding feeling when you finally beat a stage that you were stuck on for so long. Something I enjoyed quite a lot was when a friend and I were figuring out puzzles together. Discussing strategies and trying to figure out how each puzzle worked.

Now, I can keep praising the gameplay for a long time here. But, take it from me. If you enjoy puzzle games or great brain teasers, this is the game for you. But is the rest of the game any good? In the visuals department, I can only give you one answer and that’s yes!

Compared to the Game Jam build, this game got a visual overhaul. From a cuter main character to better animations. It’s all here. I personally think that Baba is a sort of white rabbit/cat hybrid animal. In this version, the improved animations give the player more information instead of the rather static look of the original game.

There are barely any sound effects in the game. But, that’s no big issue. Since it would destroy the atmosphere of the game if the developer added sound effects for the calm water or lava. It would be a bit too much. The music, on the other hand, is amazing. It’s rather calming and soothing to listen too. It’s a trance soundtrack that relaxes you to think outside of the box to find the answer more easily.

Controlling this game is also a blast. I rarely had any issues with the controls. The fact that you only need a few buttons makes the game easy to understand. All you need to know is how to move Baba, how to undo an action or how to wait. You can press the “A” button to wait for an object to either teleport, move, jump… while you are standing still.

Now, yes, I’m praising this game to the moon and back. But, does that mean it’s flawless? Sadly enough, no. I have a few things that I have to mention in my negatives section. 😦 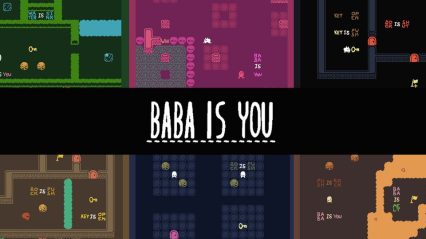 Now, the game makes a few minor mistakes that might be called nitpicks. First of all, there is something I really dislike about the UI. You are stuck to the level layout. That means that you can’t move freely over the screen when selecting levels. This can make navigating in the level select a bit tricky.

You get a flower when you finish a level in a stage. Whenever you finished around 6 stages in a level, you can go on to the next level. But sometimes, you earn sun symbols. And it’s never clear when you are going to win which symbol. This is extremely annoying when you are only one sun-symbol removed from opening that one gate that’s blocking that one world.

Now, since when is the “B” button a select button? In almost every game I play, the “B” button is a cancel button. Not in this game, it’s a selection button. My brain is so hardwired to press B to go back to the world map, I get extremely confused when I suddenly enter a level or select an option that I didn’t want to select.

Something that I think would be great is a sort of hint system. This game could have used a help system where the user could unlock a hint after a certain amount of time. Sadly enough, you are on your own in this game. Oh well, thankfully there are walkthroughs when I really want to know the solution to one level.

And yes, that are all the negatives of this game. So, let’s wrap this article up and let’s go to the conclusion.

I can totally understand that this game isn’t for everybody. This game is for people who really enjoy solving brain-melting puzzles or extremely unique indie games. The game is extremely charming and enjoyable. The addictiveness of this game has that one more try mentality. And as soon as you find the solution, you get that rush of adrenaline.

I really meant what I said in my tweet in January. I think there are huge chances that this game will be in my top 10 games of 2020 list. I enjoyed my time with the game, the visuals, the soundtrack, and the gameplay that much.

So, give this game a try! It’s totally worth your time in my opinion. And not only that, 10% of the game’s profits go to charity which is an extremely nice move of the developer. Even for an indie developer.

There are a few minor things that this game does wrong but honestly, I think they can be fixed with a patch or a feature update easily. Especially the “B” button thing since I found that extremely annoying.

And with that said, I think I have said everything about this game I wanted to say. Thank you so much for reading and I hope you enjoyed reading it as much as I have enjoyed writing it. I hope you have a great rest of your day and take care!

6 thoughts on “Game Quicky: Baba Is You (Switch) ~ Review Is Win”