Some time ago, I published a press kit about a game that GameChunk is developing. This Croatian indie developer is creating a title called Trip the Ark Fantastic. Now, I discovered that this isn’t the first game developed by the studio. They created an adventure game called “All You Can Eat”. And that’s what this review is going to be about. The developers provided me with a press code for the game. And of course, in this review, you will get my 100% honest opinion on the game. In any case, let’s dive right into the comic game that’s “All You Can Eat”. And as usual, feel free to leave a comment in the comment section with your opinion on the game and/or the content of this article.

In this game, you play as a lazy slob that is living in a diner. A few years ago, the diner started doing an all-you-can-eat buffet for the low price of 2 bucks. The idea is that he can keep eating for free unless he leaves the diner. But after some peaceful time, disaster strikes and the chef Luigi gets an offer he can’t refuse. He is going to sell the diner for a million bucks to build a parking lot on it. So, now you have to get into action to try and save your precious diner from closing by collecting a million dollars as quickly as possible.

The humor and story of this game is spot on. It’s quite enjoyable and fun. There aren’t too many characters and they don’t get a lot of character development but the chosen stereotypes are just great. Now, after you have beaten the game for the first time, you get a new game plus. Here two of the developers explain a lot about the decisions that they took in creating this game and they tell a lot of interesting details I didn’t pick up in my playthrough.

You might have already picked this up from the screenshots in this article but the visual style is something unique. The developers tried to mimic the way that newspaper comics worked. Those three-panel comics you see in the newspaper. In the end, you can also print out your playthrough as a sort of comic book you can print out. This is an amazing feature that really surprised me. This also explains the reason why there isn’t any animation in the game. Otherwise, the whole printable comic idea wouldn’t work.

Now, this game is really short. You can finish this game in a few minutes. It’s possible to see and do everything in one or two hours of play. While you can argue that this is negative, I honestly think that this isn’t such a bad thing. Since the developers actually explained in their commentary that this game was a sort of taste test, to see if people were interested in this style of game.

Now, this game has been translated into German, Russian and Chinese. Thank you to the translators that made this possible. In addition to that, the additional options you have in the options menu to stop the camera shake, colorblind mode, mute the game and such are great additions. But I wonder why the colorblind mode was added since the whole game is in black/white. So, if somebody can explain this to me in the comments that would be amazing.

The controls of the game are quite simple. The only thing you will need to play this game is the mouse. You can use the left mouse button to interact, speak and combine items. When you use the right mouse button, the main character gives you his opinion on the object in question. This is also a very helpful hint system if you are stuck or new in the adventure game genre. 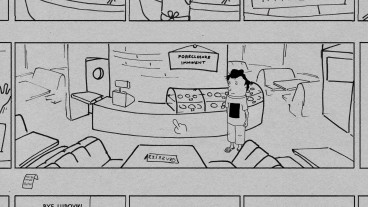 The sound design of this game is decent. Since this game didn’t have a big budget, the game doesn’t have any music and doesn’t have a lot of sound effects. Now, this in itself isn’t such a bad thing. Remember, you can print the story as a comic at the end and if the game relied on music or sound effects, the comic wouldn’t work at all. The negative part is that I wished there were a bit more ambient sound effects. Like some sizzling in the kitchen or some police radio noise in the police office.

The printable PDF is a cool feature but I had my mess up with my first playthrough. I was going to send it to the developers but something happened. I started the playthrough of new game plus for this review and that pdf overwrote my broken pdf. So, it’s possible that your comic printout gets a bit corrupted.

And if I’m allowed to nitpick, the fact that the game hangs and seems frozen when the pdf is being created is a bit annoying. From a programmer standpoint, I totally understand what’s happening. The game is creating the pdf in the background and it freezes the game to make sure there are no additional variables that can interfere with the creation. Now, I would have moved the screen to the visual of “please wait while your PDF is printed” while the PDF is being printed. Not after. At first, I was going to ALT+F4 the game since I thought it had completely frozen.

Now, one other minor nitpick is that the game didn’t close right away when I exited the game. Steam kept saying that I was playing the game while I was unable to find anything running while using the task manager. Maybe it takes a long time to shut down the PDF engine in the background?

There is one minor thing that I dislike about the printable PDF. And that is the fact you don’t see which question or reply was picked by the player. This makes that some jokes like the name of the dinner chef looses a bit of their impact.

Sadly enough, there is one somewhat game-breaking bug in the game. Thankfully, it doesn’t ruin your save file but it confuses the game enough you get into a loop of empty screens. This can be achieved when you use the right mouse button on the empty sign in the MegaSlime Corp. I think this might be caused by a conflict in the code. But, when you move on to a blank square… The best action is to pause the game and resume with the continue option. That seems to fix it. Thankfully, it’s the only location where it happens.

And that brings me to the last nitpick of the game. There is no clickable button to pause the game. You have to use the “ESC” key to get to the pause menu. But, I totally understand why this decision has been made. Since, if you create a button that’s always on screen, I don’t want to imagine the effort that needs to go make sure that it doesn’t appear on the printable pdf.

The rating in the newspaper

This game is short and it’s possible to get all the achievements in 1 or 2 hours if you are familiar with point-and-click adventure games. But, this game is a big breath of fresh air in my opinion. I really enjoyed the references and throwbacks of the plot. The story made me laugh several times.

Visually, this game reminds me of a simpler time. When I was drawing story ideas in my textbooks in the study hall or during a boring class. Or when I was reading comics on a rainy Sunday afternoon. I think my weakness for nostalgia really made this game even better for me.

It’s a shame that there I have a few minor nitpicks with the game. Most of them I can totally understand why the decision has been made. Expect the game-breaking bug, that’s something I wish was fixed.

Even with the game-breaking bug, I still fully recommend this game. It’s an amazing demonstration of what this style of game can do. The potential for this concept is endless. Imagine being able to share your adventures with other players or creating your own comic book. It’s the ultimate merchandising.

It was quite difficult to find things I didn’t like about this game apart from the extremely short length. I want to play more games in this style and I’m happy that I can talk about this game and spread the word. Since there is another game announced called “The Heist” that looks extremely promising.

So yeah, I think this game is totally worth your 2 bucks and with that, you get a coupon to an amazing concept that gives the taste for more. Thank you GameChunk for bringing this game to Steam! I can’t wait to see what your other projects are going to bring us.

And with that, I have said everything I wanted to say about this game. Thank you so much for reading this game and I hope you enjoyed reading this article as much as I enjoyed writing it. I hope to be able to welcome you in another article but until then, have a great rest of your day and take care!

Editorial note: The developers of this game got a draft of this review and might fix the game-breaking bug in the future.