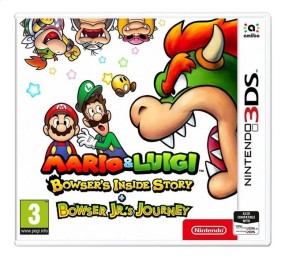 Remember the Zelda project, Final Fantasy project, and the Tomb Raider project? Well, today a new project drops all about Mario! The mad man, The Well-Red Mage found over 100 bloggers to write about the Mario series in the style that I found several bloggers for talking about the Zelda series and the Tomb Raider series. In any case, of course, I’m a part of this collaboration of fine bloggers! Now, you can find the hub article where you can find links to all the other articles here: [LINK TO ZE HUB BABY!] And in this article I’ll talk about my adventures and thoughts of Mario & Luigi’s Inside Story + Browsers Jr.’s Journey. So, let’s go with this Mario RPG! 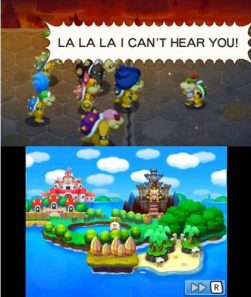 This game tells the same story as the original Nintendo DS game released in late 2009. From what I can see, most of the changes in the game are focused on the graphics. While the original game has a more 2D look to it, the remake has a more 3D look to the visuals. You can see a great comparison in the video created by aWiibo where both versions are set side by side.

On top of that, this game has an additional story mode telling a story about Bowser Jr. This mode adds 7-ish hours of playtime if I compare the times on howlongtobeat.com. But, the game almost doubled in playtime for people who want to play the game to its full completion.

There is another writer taking a look at the DS version of this game, but I’m focusing on the remake of the game. While I haven’t finished the game for this article due to time constraints, I did some research to make this article interesting in another way. 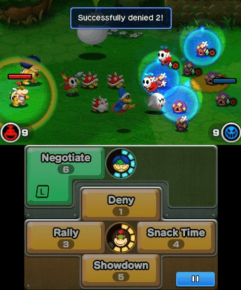 So, did you know that this game is one of the final games released by Nintendo for the Nintendo 3DS? It wasn’t the last Nintendo published game on the 3DS however, that honor goes to another remake: Kirby’s Epic Yarn a bit later in March of 2019.

For some reason, Nintendo skipped over remaking Mario & Luigi: Partners in Time and remade this game. Partners in Time is the only one of the three first games that didn’t get a remake on the 3DS.

Something that I found quite strange is that there are a lot of leftover sound effects from Yoshi’s Story and Mario & Luigi: Partners in Time in the rom for the original DS version. This isn’t the case in the 3DS version.

This game got two updates. The first update fixed an issue where you could soft-lock yourself with Luigi. In the second patch, a sound issue was fixed in the Music menu under records.

According to the TCRF (The Cutting Room Floor), there are various test rooms left in the final version. You can read about them in more detail on the page of this game.

After releasing this game, the developer AlphaDream filed for bankruptcy protection. Which is a shame since we might not see a Mario & Luigi RPG on the Switch. Maybe Nintendo can get the IP to another developer?

Now, the tricky thing is that I had almost finished the DS version. I was close to reaching the final area. But then disaster struck. I lost my save file and I felt a bit too discouraged to restart the whole game to get to the point I was at.

It’s a darn shame since the game is quite a lot of fun to play. If you have played the two previous games, you know what to expect here in terms of gameplay. It’s an RPG where you play as Mario & Luigi, where the A button controls Mario and the B button controls Luigi. This is also the case in the battle mechanics where you have to rhythmically time your button presses to do more effective attacks.

The annoying thing is that I’m anything but rhythmic. So some battles took longer for me since I wasn’t able to do all the attacks at full damage. I did improve the more I played the game, but I rarely got consistent.

Yet, I did enjoy the game for silly and unique storytelling. In this game, something strange happens with the toads. They swell up like a balloon getting the nickname “The Blorbs”. After some investigation, all the affected toads act a strange mushroom created by the mad scientist Fawful. So, Princess Peach orders Mario & Luigi to set out and try and find a solution. But, then Bowser tries to kidnap Princess Peach. When this fails, Fawful lets Bowser eat a vacuum mushroom and this sucks Mario, Luigi and various other characters from the mushroom kingdom inside Bowser. Mario & Luigi have to help Bowser to regain his strength in order to escape and find a cure for the Blorbs.

The multiple layers of the story are something I truly love. The writing is rather humorous and lightweight. There isn’t a lot of voice acting, but the voice clips that are used help a lot to understand which emotion is in that certain part of the dialogue.

Bowser Jr.’s story takes place during the events of the main game. So, the additional story is a bit of a side story. Currently, I’m playing through it and I’m going to keep my opinions and this quite interesting side story a secret.

Now, I much prefer the visual upgrade from the remake over the original. I have looked at various screenshots and video comparisons of the original game and the remake. I think that the remake’s visuals feel more alive and pop that much more. It makes the original look more like a sort of Saturday morning cartoon from a decade ago.

Anyways, I think I’m going to end off this short look back at Mario & Luigi’s Bowser Inside Story + Bowser Jr.’s Journey. That’s a mouthful. That said, I hope you enjoyed reading this article as much as I enjoyed writing it. I hope to be able to welcome you in another article but until then, have a great rest of your day and take care!

Wahoo! You are a Super Reader! But the adventure doesn’t stop here… There’s more of this project in another castle! This article is just one level in an entire Super Mario Multiverse, a galactic collaboration between writers around the world sharing a bit of our hearts and memories about our favorite Mario games. Visit the Center of the Multiverse to see more: