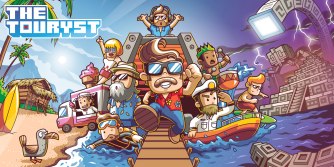 In the world we live in today, it’s not too advised to travel. To protect the risk groups from COVID-19 that is. So, that’s why I’m going to talk about a small indie game on the Nintendo Switch called The Touryst, where we can have a virtual vacation. But hold on, is this a holiday worth going on? Since, the holiday picture you see as cover art spells doom. It might go wrong pretty quickly. But, is that wrong as in, story-wise or wrong as in… a bad game? Let’s find out together in this game quicky article! And as usual, feel free to leave a comment with your opinion on the content of this article and/or the game in the comment section down below.

Just like in a vacation, the story of this game takes somewhat of a backseat. The story is there to explain certain things that the people of the island do. But what is the story of this game? Well, in this game you play as a guy going on a holiday. He discovers a way to enter a strange alien looking temple and when exploring that temple, his adventure is afoot.

It’s quite impressive that in a game that’s only 6-ish hours long, that there is so many different things to do. I have even seen speedruns of people completing this game in under one hour. So, this game is quite speedrun friendly.

The controls of this game are quite close to perfect. The are easy to understand and extremely responsive. I was able to understand all my abilities even after a month or so of not playing the game.

The UI and “TO DO list” is one of the best I have seen in a while. It logs almost everything and it’s easy to navigate and find. Per island you get a list of the tasks you still can do to progress either the main story or a side quest. The only minor complaint I have is that the load game feature is under the options menu. I just wish that this was it’s own menu with a sort of “save and quit” feature as the first save file or something.

The performance of this game is mind blowing. The game runs smoothly at 60FPS and I can’t tell you one spot where it dropped lower than 60FPS. Together with the impressive visual design, this game is a technical master class for other developers. The visual presentation of this game is something I really enjoyed. It reminds me of a sort of smooth Lego-ish vibe with the stunning voxel graphics.

The animations are wonderful to look at as well with the steady and high frame rate. To me, it was extremely immersive. I really loved going onto the islands and exploring around to see what the game had to offer. I loved how the footprints stayed in the sand or how the lighting of the sun changed when you moved the camera around.

Couple this with an amazing soundtrack and sound design together with the rather relaxing and sometimes tense atmosphere of this game and you have another reason why I feel that this game deserves a lot of praise. But, there is something… something dark lurking while I’m praising this game.

Sadly enough, this adventure isn’t perfect. There are some mistakes in this adventure that I think could have been better. The first thing that I found a big bummer is the fact that there can be only one save file in the game.

Speaking about saving, something I found a bit disappointing was the fact that when you choose save and quit in a monument, that you have to restart the whole monument. So, better put the Switch in sleep mode than choosing save and quit.

There were some mini games and platforming sections that were a tad bit too difficult in my opinion. Especially when some tricky jumps were involved. It was so annoying when I fell into a pit just because I jumped a bit too early. Thankfully, you do respawn quickly, but the whole room resets. So, yeah, if it’s a puzzle involving a lot of steps… Let’s just say it’s extremely irritating.

The fact that there is no real hint system is a bit frustrating. In some boss battles I had to find the solution by complete accident. There is some trail and error in this game. While I didn’t find this too big of an issue, I can see that this might be a turn off for some people.

With that said, I think it’s time we reached a conclusion. Don’t you think as well? Should you go to your nearest Nintendo eShop Travel Agent and book this holiday or should you avoid it?

This game is a hidden gem. While it’s quite short, it’s a blast to play and explore the worlds that were created for this adventure. But, there are some cracks in this gem that might turn people off from playing it.

It feel like some parts weren’t polished enough and that made some sections a bit too frustrating. Thankfully, those moments aren’t too frequent and spread out quite a bit.

This game is a joy to beat but a nightmare to complete. I can only agree from what I have read from other reviewers, there are some (optional) sections like the surfing and soccer game that make this game almost a rage quitting affair.

Well, I think that this game is highly worth your time and money if you enjoy exploration games, puzzle games, platformers, indie games… There is a huge audience for this game I think. But, I wouldn’t be surprised if this game didn’t click with everybody. Since, this game can be frustrating but also a bit repetitive.

Thankfully, there is a demo. So, you can try before you buy. My advise is that you first give the demo of this game a try and if you feel that it’s your cup of tea (or coffee, or beer or …) then you buy this game. Since, it’s a joyful adventure with some weaker spots that’s a blast to experience.

And that’s everything I wanted to say about this game. Thank you so much for reading and I hope you enjoyed reading this article as much as I enjoyed writing it. I hope to be able to welcome you in another article but until then, have a great rest of your day and take care!