It has been a long time, hasn’t it? I’m sorry about that, but moving houses just takes a lot of your time. On top of that, my internet connection isn’t up and running yet but I’m quite sure that in the upcoming week, that will be fixed. In any case, this offline time give me some time to play some developer request games like WeakWood Throne. I got a publisher code on the Nintendo Switch for Drageus Games who as you know always want my 100% honest opinion on the game. So, let’s talk about WeakWood Throne and if you should give it a shot or if you should ignore this game. Should you take on this adventure or should you leave it up to the influencers and watch a let’s play about it? Or should you avoid this game at all costs? Anyways, I think we should take a look at this game in my game quicky format while I invite you to leave a comment in the comment section down below with your opinion on the game and/or the content of this article.

An Adventure For You 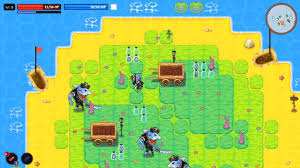 The visual presentation of this game is amazing. This game looks like a high budget flash game where the developers put in a lot of hours to make everything look cartoony and vibrant. Everything looks very consistent and has a lot of charm.

The animation is also pretty good. The only minor nitpick that I have is that the player character is rather static when you are in a boat. But if that’s the only thing, I don’t think it’s that big of a deal. If even small details like when you change weapons in your inventory change the weapon that the player character is holding are present in this game, I can only say praise to this game.

The music in this game is good. It really fits the mood of the game extremely well and it adds the relaxing atmosphere of this game. The fact that are only sound effects playing during the night cycle gives the night a more eerie atmosphere than the day.

This game is a completely open world and it doesn’t hold your hand. So, you have to figure out this game by yourself while you are free to explore. So, when you encounter an area with only strong enemies, well tough luck. Have fun escaping that area.

While this game is somewhat challenging when you die you can restart at the screen you died. So, there isn’t a big penalty for failure. The only thing I wished is that the game didn’t kick you back to the main menu and showed a small “game over” screen.

The quality you get for the money for this game is quite nice. This game is only 5€ on the European eShop and I think that’s a fair price for the game. You’ll get your money’s worth of it without any doubt.

There are some things I’m on the fence about with this game. The first thing is the map system. While there is a mini-map, there is no overall map. It would have been so helpful when you were able to see a full map and maybe even keep notes or something on it. For example, where you got a quest from or where the nearest potion shop is.

Speaking about potions, that’s the only way I found to heal your character. There is no passive healing in this game. This is an issue in my opinion since gold is quite rare and some enemies hit quite hard.

There is something that I found a missed opportunity in terms of the day and night cycle. It would bring the game so much more alive when the NPC’s where in their houses or on different locations when it’s night. Now they have the same routine and it’s a bit immersion-breaking.

The controls are quite responsive and good but there is something the ruins it for me. Backing out of a menu is quite tricky since I always am using the “B” button to go out of a menu. But guess what, to escape the menu you have to use the same button to enter it, which is “X”. The “B” button drops items and sadly enough, you don’t pick them up right away.

On top of that, the most frustrating part of the controls is the skateboard and the dodge roll. These two actions are bound to the same button. But here is the thing. Tapping “ZL” does a roll but holding the “ZL” button starts skateboarding. But I can’t get consistent with this mechanic. Sometimes I start skating always when I go to the left and on another screen, I start rolling and never skating.

The combat is quite tricky to master. While there are a lot of higher-level enemies in the early section of the game which will wreck you when you aren’t careful, as soon as you get used to the combat controls, it’s quite enjoyable. Just keep your eye out on how much damage you are doing to the enemy and how much health it has left. If it’s too strong, just avoid it.

Let’s not go on this adventure 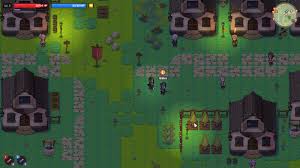 Sadly enough, there are some things that I really didn’t like about this game. First of all, let’s talk about hitboxes. In combat, they are just fine. Rarely I felt that I was unable to hit an enemy or that a hit didn’t connect. But the issue starts with everything else. You can clip with NPC’s quite easily and push them around. But the worst of it all is trying to hit plants or bushes. That hitbox is so precise that if you don’t hit it dead center, the hit doesn’t register.

While the sound effects are decent, I fell that there aren’t enough sound effects. If these were for non-essential mechanics, I wouldn’t mind so much but I really missed a sound effect for unable to use a potion, picking up an item, and having low health. Some of them also didn’t make sense at all. Why do lily pads and walking on wooden bridges have the same sound effect?

The biggest issue in this game is the lack of a tutorial. While there is a tutorial in the first few screens, it doesn’t explain the mechanics like leveling up your character or how to use the quest menu and things like that. It’s a real shame since as soon as I got the hang of the leveling up mechanics and being able to buy stronger weapons, I started to enjoy the game more. Oh, and let’s not forget to mention that if you revisit the first screens, the tutorial messages still pop up for some reason.

I think it’s time that I address the elephant in the room. Normally I start my articles by talking about the story or the premise of the game. But in this article, I haven’t done that. That has a very simple reason. The story isn’t that good in my honest opinion. I had to open the store description to get some explanation but it was your generic explanation that almost every RPG has, that there is something wrong in the kingdom and it’s up to you to figure it out and help the people. So, I’m sorry, but if you are looking for deep lore and dialogues, I think this game isn’t for you. Granted, I have only played this game for up to 2 hours and maybe the rest of the game will have a better story but so far it didn’t impress me one bit.

Oh, I’m forgetting about something. The save system. Yes, the save system. While it works, I can’t explain how it works. I think the game saves during every screen transition. But there is no icon indicating that so I can’t tell you for certain.

And the final point I want to make is that this game just forgets to bring the options in the pause menu. So, you have to go to the main menu when you want to change the options of the game. And with that, I think it’s high time to wrap this article up before I forget to save it.

I honestly think that if the game had a better tutorial, better hitbox detection, and a map system… Then this game would have been so much better. This game is well made and has so much potential but it lacks depth on some quite essential levels.

I could forgive the game having a lackluster story if it did give some direction to the game. For example, the story in Breath of the Wild isn’t anything special but it gave the player a goal to work towards and it built the world and the culture of it. On the other hand, I think that I might be expecting too much of a game that cost only 5€.

Can I recommend this game? Well, yes and no. I would recommend this game to people who enjoy playing simple RPG/Adventure games or people who are looking for the next game to play on the bus or in the waiting room. But I’m afraid that the issues of the game hold it back and that it will put a lot of people off.

I enjoyed myself while playing this game for this review but I’m unsure that I’ll finish or revisit the game in the near future. Maybe when I’m on holiday and I’m looking for the next game to finish. Or I might pick this game up again when it gets a major update that fixes (some of) the issues I have mentioned in this article.

Honestly, I think that with the right personality, this game might make an enjoyable let’s play to watch. While the game has it’s flawed to play, it has quite a lot of charm and I think that it’s worth going through it.

So yeah, I’m a bit on the fence about this game. While I have played better games, I also played a lot of worse games. I think that’s the gist of it. I think that this game is a perfect example of a very rough diamond that with some polish can get better.

With that said, I have said everything I wanted to say about this game. Thank you so much for reading this article and  I hope you enjoyed reading this article as much as I enjoyed writing it. I hope to be able to welcome you in another article on my blog but until then, have a great rest of your day and take care.