And we are back with the Creative Christmas series, a collab I’m doing with LaterLevels. To be honest, during the past two days I was too busy with family parties. So, I was unable to think of a theme for this series. Okay, I have to admit that I thought about it, but I wasn’t able to implement. I thought of one where each article was a page in Santa’s diary, but then I wouldn’t answer for myself. Another idea would be where I would talk about if my answer would be in the naughty or kid side of Santa’s book. Well, maybe with the help of a present I can think of a theme. I got a new Mario shirt and a new compressor to blow out electronic material. But what’s this? Another question about presents for me to answer, let’s take a look!

Your help must have worked, because it’s now Christmas morning and presents are under the tree! There’s a fancy box with your name on it; which gaming-related item are you hoping is inside?

If I would ever be able to get a certain gaming related item, I would have to divide my answer into two parts. First of all, real existing items. Which game-related items would I want that truly exist?

Besides a boatload of games that I want in my collection and a few consoles I want to have and start collecting for, let say which piece of merchandise do I really want to have?

For me personally, I would love to have some more merchandise of the Bioshock series. I know that there are some nice looking t-shirts and bags out there.

If you would give me some merch from the Bioshock series, even when I already have it, I would always be happy. The Bioshock series is such a great series that is near and dear to my heart.

Now, there are a few games I know that there is barely any or no official merchandise on the market. But I would love some merch for it anyways. These games include Ace Attorney, Monster Tale, Stella Glow and the Zero Escape series.

Actually, if you ever need to give a gift to me; anything game related merch would do the trick for me. Because I’m a game collector I enjoy getting something game-related. You would make me even happier if you relate it to a game series I like. And you know those series if you read my blog or talk to me.

Now we come to part 2 of my answer. What if I’m able to get a fictional game item in the real world. This is going to be interesting.

You know what would be nuts? If I would be able to get any of the transformation masks for The Legend Of Zelda Majora’s Mask into the real world. Then again, what practical use would it have besides the cool factor? Besides, it wouldn’t be that much fun since I would have to use these while nobody sees me or I would be used for experiments and all that jazz. 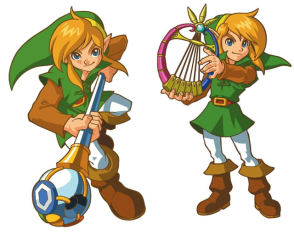 Then I thought about getting the Harp of Ages or the Rod Of Seasons from The Legend Of Zelda Oracle of Ages/Seasons. It would be so close to reverse the flow of time or change the seasons at will.

While messing with time presents a whole different host of problems, the same can be said for the Rod Of Seasons. If I would be able to change the seasons at will, I might destroy the planet with it. So, that’s not a good idea either. Besides, the rod only seems to work on sawn-off tree trumps and those aren’t around too often in my area.

The notebook from Scribblenauts would be pretty interesting to own as well. I would be able to summon what I want and when I want it. Then again, if this would fall into the wrong hands, dangerous things can happen and we would live in a strange world.

While it would be amazing to have any video game item in the real world, I think it would cause a whole host of other problems that might bring me into greater trouble. If the problems are solvable, you would have to put the practicality into question. Since not everything from the land of video games would have a use in the real world.

So, if I would be able to avoid any trouble, I would love to have the items I listed above these paragraphs. Yet, I think that the answer that was expected in the questions was more the 1st part of this article. I see the second part of this article more as a fun thought expirement.

That’s my answer for today. I hope you enjoyed reading this article as much as I enjoyed writing it. I hope to be able to welcome you in another article but until then, have a great rest of your day and take care.