Today is an exciting day for me, NekoJonez gave me the chance to write my first, first impressions article. So, any feedback on my writing is welcome. I also got the honor to write an article about a game I got a review copy of from the developer. The developer asked me to give my full honest opinion on the game, so that’s what you are going to read in this article.

The goal of the game is to exit the dungeon that you entered to recover your stolen candies. At every level, you need to collect a key (or in this game, a ghost) to be able to open the door to the next level. It’s somewhat unclear what the purpose is of the donuts are in the levels so I just didn’t collect them.

If you read the description of the game on the Nintendo eShop store page, you discover that you need to bring back the sweets and lost souls, which makes the goal of the game very clear.

Every level of the game is on one screen, you only need to jump from left to right. (And of course up and down) This doesn’t mean that game isn’t complicated though. In some of the levels, you really need to time your jumps to avoid being hit by moving spikes/traps or enemies.

The controls of the game are quite easy to figure out. You can either use the joystick of the buttons. I preferred the buttons, the joystick is a little harder not to use to much power which makes you die easier.

One thing that I missed was the option to shoot down the enemies, you really had to jump on their heads. Just like a certain plumber. 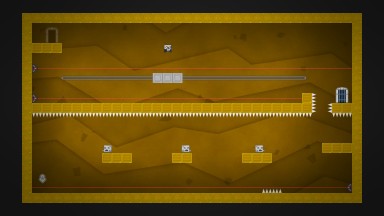 Dead Dungeon is a 2D game. This means the game looks very simple. I think the fact that the game is 2D made it more enjoyable to play. The simple look made me feel like I was playing a retro game. Somehow, the character made me think of Courage, the cowardly dog, which hit me with nostalgic feelings.

Even though the game is in 2D, the game doesn’t seem to lack animations and extras to make it look more appealing.

One thing I noticed, was that the levels always had a different color which gave it a little more sense of a designed game. 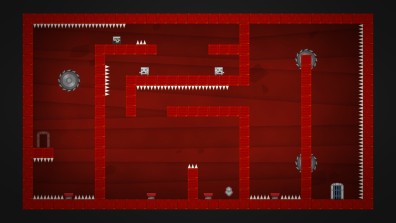 In this game, the goal is to jump from platform to platform and back. The game isn’t that easy and you’ll need a lot of patience. I often felt like throwing my Switch away, but a minute later I started trying again. This game has that “just one more try” mentality. I’ve often played games that made me feel annoyed at not being able to finish a level and just stop right there and then.

Every level has a different design, sometimes you just have to jump without avoiding traps, sometimes the level is full of traps. I will surely keep playing this game to try and finish it.

The difficulty of the game also isn’t really clear, sometimes the levels are easy and sometimes they are kinda difficult which makes it hard to finish.

The music and sound of the game didn’t really annoy me. After a while, it started to sound a little bit monotonous.

One thing I missed was the sounds when you jumped, died,… These would give the player some more information to work with or time their jumps better. 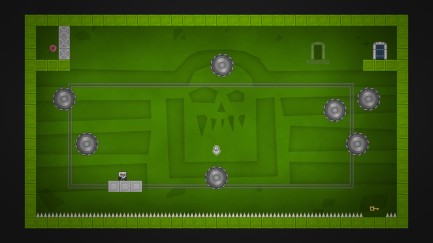 When I first opened this game, I thought: “oh well, this doesn’t look too difficult”. Let’s just say, I was very wrong. The fact that you don’t get a lot of text after each level also is a good thing, I don’t really like text-heavy games.

I didn’t really get the goal of the game at the beginning, but that didn’t really keep me from playing. You don’t really need to know the story to be able to play the game.

Jonez and I noticed that it is better to play handheld than docked. In the docked mode, some controls are delayed which makes it hard to finish a level.

People that like old-school games like ink and super meat boy will really like the vibe of this game since it gives you an older vibe and older music.

Thank you for reading my first game review, well, my first “first impression”. I hope you enjoyed reading it. If you have any feedback for me to write better articles in the future, I’m happy to hear it. Otherwise, I hope to welcome you in another article or enjoy another article of Jonez in the near future 🙂