Life goes on. Of course, it does. Repentant recently released and the game is a continuation from Little Kite. But, if you haven’t played the original, you can still play Repentant. Full disclosure, I got a press-code from the developer to write this article. But, the developer wanted me to give my 100% honest opinion. So, that’s what you are getting today. What is my 100% honest opinion on this point-and-click adventure game, one of my favorite genres ever! Let’s find out. And as usual, feel free to leave a comment with your opinion on the content of this article and/or the game in the comment section down below.

The sequel of Little Kite follows Oliver, the abusive boyfriend. Now, I could try to explain the game to you, but I feel like the introduction written by the developers on the store page explains the plot of the game the best:

Experienced criminal Oliver begins to suffer from strong remorse after the terrible deeds of which his family has suffered. Unsuccessful attempts to restore relations with his ex-wife further worsen his condition and alcohol dependence.
One day in a small shop, he becomes a witness of a robbery committed by a young girl. At this moment, he gets the opportunity to atone for his sins by helping another person. But who really needs help and who is the victim? It remains to be seen.

The writing in this game is amazing. The story really gripped me from the moment it started. I love experiencing stories like these since they stay realistic and down to earth. Also, it shows the other side of life, that it’s not always sunshine and rainbows.

The game got translated into Russian, Ukraine and into Dutch. I can’t speak about the Russian nor the Ukrian since I don’t speak either language, but judging from the quality of the Dutch translation, I can say it’s quite good. For those who don’t know, I’m not a native English speaker. My native language is Flemish, which is “a sort of Dutch”. Something like American and British is a sort of English.

The voice-acting isn’t translated, it’s only the subtitles of the game. Now, I’ll talk more about the voice-acting in just a minute, but first I want to quickly say something about the Dutch translation. Personally, I didn’t like it. There is nothing wrong with the translation, but it uses more expressions and sayings used in the Netherlands than Flemish ones. I got a bit put off by that as a Flemish-native. But, this is more of a nitpick. Compare it to, an American gamer getting annoyed at the subtitles since they are in UK English. It won’t ruin the experience, but it’s noticeable sometimes. So, that’s why I played the game in English.

So, that ramble aside, I wanted to talk about the voice-acting. This game has decent voice acting. Especially the voice acting of the girl is extremely well done. And the type of voice really matches the characters as well. Yet, the voice acting didn’t always click with me. I can’t put my finger on why I think that, but I feel like it was a bit bland sometimes, not enough emotion. Then again, I felt that the voice acting pulled me more into the story. So, yeah.

The dialogue can go, sort of, automatically. When you don’t press a button to continue the dialogue, it continues on its own after a while.

The visuals in this game are amazing. I really like the art style. It feels like you are playing the story inside a painting or a realistic comic book. If I were to nitpick, I would say that I disliked that not every sign and such was in English. Then again, I don’t think this game takes place in an English speaking country, so that adds to the atmosphere.

The game takes place in the night store. It has basically four screens where the whole adventure takes place. There is one screen that’s an exception, but talking about that would be a spoiler. I really like how the whole story is in this night store. The full-screen artwork for some cutscenes is amazing.

The visual presentation is enhanced by decent animation. There is a minor thing I could criticize about the animations. The running animation looks so unnatural. If you double-click, Oliver uses the same walk cycle but moves twice as quick. And strangely enough, this only works outside the store.

Overall, the game runs at a consistent frame rate, apart from that one scene outside the store and the storefront. The game requires 512MB VRAM, and I have 2GB in my PC. Yet, I had some frame stuttering and some frame drops. The game was still playable but it was quite noticeable during that section.

The visual presentation is accompanied by an enjoyable soundtrack. The only thing that I would have done differently is to loop the music so the player would have been unable to know when the track started or when it ended. I think I say enough about the soundtrack with this: “If it was ever released as a sort of DLC package on Steam, it would be an instant buy for me. I would add it to my playlist for when in the mood for more relaxing music or tense music.” 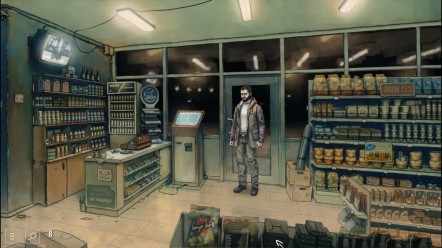 While I was playing this game, I was really enjoying solving the puzzles. The controls for this game are really good. You only need the mouse to play this game.

Now, if you ever get stuck, the game has a hint system. And this hint system isn’t one of the best in my opinion.

You can click it 20 times in the whole game. It does circle all clickable areas. It doesn’t give you any other hints on how to progress or what items you need for the current puzzle. Since it also circles items you can’t pick up or need for a later puzzle. I think that this game could have used a system like in the Broken Sword series where you could ask for a clue on what to do next and when you get stuck (read, don’t progress or solve the puzzle after a certain amount of time), you get access to a clue revealing even more.

Anyways, the rest of the UI is good. The inventory system is at the top and you have your menu button at the left bottom corner of the screen. Besides the hint button. Now, you can combine items. Near the end, I discovered that some combinations didn’t get any reaction out of Oliver. Like the bandage with the kettle.

Another minor change I would have done is, change “play” in the main menu to “new game”. Since clicking that option always starts a new game and it would avoid people thinking that it’s a way to reload the latest checkpoint.

This game isn’t too difficult for veteran point-and-click players. If you have played games like Beneath the Steel Sky, Broken Sword, Monkey Island, Deponia… This game shouldn’t be a problem for you. What I’m saying here is that experience in the genre helps you to get through this game. If you don’t have experience in the genre, always ask yourself this question, what exactly is stopping me from progressing the story and what do I have in my inventory or around me to aid in solving the issue?

This game autosaves, so that means that after you have solved some puzzles, the game autosaves. You can’t save in between. At first, I found this kind of disappointing but the autosaves are so frequent that it isn’t a problem.

For 6€, you get an adventure that lasts roughly one hour. This sounds short, but it’s a great ride. I have finished this game in 2,5 hours. Granted, I have left the game running while I was writing this review for example.

So, that’s everything I wanted to say about this game, it’s time for the conclusion.

-The music should fade in and out better.

-The game is too short.

-In one area some minor frame drops.

-The hint system could have been more fleshed out.

+ The voice acting can be a hit sometimes.

I have played both games in this series and I enjoyed both of these games. Personally, I found that Repentant is the better game of the two. The addition of voice acting really adds a lot to the game.

While the game is rather short, I really enjoyed myself with this game. I would love to see a third entry into the series exploring the aftermath of the situation from Mary’s point of view.

While the game could have used some more polish, I think that this game was worth the wait. I can’t wait to see what the developers are going to put out next. Since now I’m hyped for their next adventure game!

Thank you for reading this review and I hope you enjoyed reading it as much as I enjoyed writing it. I hope to be able to welcome you in another article but until then, take care and have a great rest of your day.