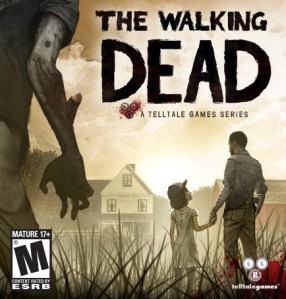 Deep breaths, Jonez, deep breaths. I might have to hide after this first impression or a horde of fanboys might come and attack and bite me. I’m scared to talk about my first impression with this game. I just finished the first chapter out of five from this game and it’s not what I expected. I’m going to warn you, this game might shock people, and this first impression might give me tons of bad comments. But please, keep in mind that this is my opinion on it and if you want to discuss my opinion, do it in a civilized manner. We have to stick together when we try to survive the horde of bad games lately. I got this game a week ago for an extremely low price. And it’s an adventure game from TellTale, a company that made the excellent Tales Of Monkey Island. And point-&-click / adventure games are my favorite genre ever. But does this game live up to the hype I created for myself or was this a big mistake to hype? Well, let’s make the harsh decision and let’s take a look at it. Feel free to leave a comment with your opinion on the game or / and this article.

The story, such a weird thing.

Yesterday, I recorded a podcast with Q about this and I already talked about this. Because I was able to verify my fears, I think I can talk about this with more comfort. The story of the Walking Dead game isn’t as good as people claim it to be.

Don’t get me wrong. The setting and idea behind it is pretty nice but there are a few things that made me shake my head pretty bad. There are some major flaws with the story.

The first thing were this game falls flat on it’s face is the fact that you know that there is going to be a victim. Sometimes you have the illusion that you can choose while in reality, the outcome doesn’t change.

Some choices just give you a different dialogue part while the main storyline is pretty much the same.  I can be wrong on this but from what I have played, my impression isn’t the greatest in terms of story.

Most characters die a bit too quickly as well. You barely get any connection time and a poof, they are death. And that is just lame in my opinion.

The second thing that makes me not really like the story is the fact that it exists out of some cliche things. Arguments and zombie attacks. Some things happen to have some gameplay but don’t make sense story wise. There is a moment were you are a in heated argument, somebody collapses and you are allowed to take charge. Ehrm, is it just me or did we make an awkward jump in terms of story here?

Something else that bugs me quite a lot is the fact that you are on a quick time limit. I understand the idea behind it, in real life and at those moments you wouldn’t have time to think about it as well… But when you play through the game for the first time it’s just a annoying thing. Since you barely get any time to read each option. And by the time you have read them, you have to decide quickly before you stay silent or do nothing.

Is the story bad? No, it isn’t bad. It has it’s memorable moments. The writing is nicely done but the execution isn’t the best for a game. I always feel that some main story is taking place and that you simply decides which character is going to die now or later on the road. 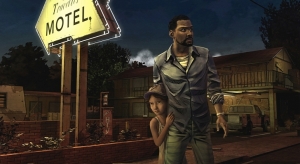 Usually I keep my story segment short, but for this game, I made an exception. Honestly, I think that the story isn’t the strong point of the game. The gameplay is. The last thing I’m going to say about the story is that for what I have seen now, the characters are a bit … well, paper thin. Like in episode two, suddenly another guy popped up out of nowhere. No explanation at the start. Just poof, he is a part of the group.

Anyways, enough “ranting” about the story. Let’s talk controls. And they are awkward at best for adventure game veterans. The simple fact you need to scroll when you want to talk or use an item on somebody is unnatural. Nearly every adventure / point-&-click game have a handy inventory where you can drop and drop the items from.

It’s possible to get used to the controls but with some animation flaws, they aren’t pretty good. Try holding the arrow keys and walk into the wall. Yes, the old shacking screen is there. TellTale, you disappoint me here. I know you guys can do better!

Do I have different complaints about the Walking Dead? Yes, yes I have. I’m under the impression that this game is quite short. A normal adventure game takes you on a lengthy adventure that takes you in tons of different places. But after a small 1,5 hours I was done with the first out of 5 chapters. Hearing from a close friend of mine, who has beaten the whole first season, each chapter is around 1,5 hours long. And trust me, veteran adventure gamers won’t get stuck easily. So, a short 5 – 10 hour game. That’s something I finish in an afternoon, and that’s not such a good thing for an adventure game.

So, this first impression sounds extremely negative. It’s almost like I’m about to say that this is a bad game. And trust me, it isn’t. This game suffers from too much hype. Everybody talks how awesome and amazing this game is and don’t look at the flaws this game has. While this game has flaws, it doesn’t make this game a bad game. The charm of the game is that the flaws get hidden behind a well crafted game. I have to give TellTale that.

The story has good voice acting and is graphically extremely well done.

Thinking about it, this game is actually more meant to be discussed with friends. Also, watching to a let’s play of this game is a tad bit more enjoyable then actually playing it. Since the surprise of what’s going to happen is then lost. I’ll finish this game for sure and I’ll write a full review about it. By then my opinion might have changed. And then I will also talk about some other things I didn’t had the time to put in this article.

Thanks for reading and I hope you enjoyed this article. I’m working on a few new articles and I hope to see you guys there. Be sure to also check out the podcast I did with Allahweh! It’s the previous article.