It’s no lie that I like MineCraft. But as a player since Minecraft 1.4 Beta, I think there are a lot of things lacking. In this blog I tried giving my better idea’s a chance. Dinnerbone or Jeb, if you read this, feel free to take my idea’s and use them in whatever way you want. I just placed them here to share my idea’s since I felt like it. Anyways, feel free to write in the comments what you guys think about my idea’s. Are they good  or are they bad? And what idea’s do you guys have to implement in the vanilla Minecraft game?

In one of the recent updates of Minecraft you can see the durability of an item by pressing F3 + G. Yet, you only can see this in the inventory. What would be extremely welcome is that if you also press that shortcut, the durability is displayed above the bar.

In my original survival let’s play, I had a mod enabled for this. It’s sadly discontinued now.  But it was a welcome mod to see how much uses there was on my pickaxe or sword left. It was buggy when it had the unbreaking enchant. But in the Durability 101 mod for Minecraft 1.5.1 everything works just fine.

Idea #2: More stuff in the ocean or less ocean.

When I was gathering idea’s for this article, a convention happened where Jeb told us that they are going to revamp the ocean biomes. Finally, since  there are simply way to much oceans in one single Minecraft world.

But also, only squids in the ocean? What’s wrong with some ocean life? Some coral plants would be lovely to have. But like DocM77 on the MindCrack panel said and I agree an awful lot, is that there should be some sharks or more ocean life.

This might not really be my original idea but it’s a much requested feature in Minecraft. But thankfully in Minecraft 1.7 it’s going to happen. Or that are at least the plans. 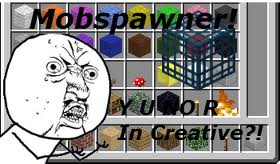 There is a petition on the Minecraft forums and mods like Too Much Items include this. Mobspawners in the creative inventory. They are missing and that is a sad thing.

Also, the big mushroom blocks aren’t present in the creative inventory. Which I think it would truly benefit from.

And why isn’t the command block in the creative inventory? It would truly benefit from being there.

Also, a feature where you can create fireworks thanks to looking to a list and enchanting the same way would be welcome addition to the creative mode of the game. 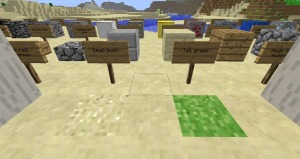 Why does grass or leaves change to the default color when you pick them up with silk touch? I can understand that a block need to change from color when placed  in a certain biome but what if I wanted some darker oak leaves in my build? It would give more freedom.

Like Infinity, I would remove the “I” after Silk Touch. It’s simply extremely silly to have that number there. But as amateur Java programmer, I can understand why it’s easier and more efficient to put the number there. But I think it isn’t useful at all to have it since it confused some (not that bright) players before.

Image being in a PvP battle and you create a potion of poison. But you missed throwing it. That sucks so much. But also, when you want to give a potion to one person in PvP, you need to have some distance and that’s not helpful in tight combat.

But what if there was a special bow that could shoot arrows together with a random potion from your inventory?

In PvP this would make things more random and challenging. Since you might shoot off a health boost for the other player instead of a damage potion.

I talked this over with a few of my friends and they thought it would make for some new gamemodes or open a whole array of new possibilities.

There are several mods already with ice, fire or electric arrows. While this is also a good idea, I still doubt about the crafting recipes.

Finally, the end of the article.

That are all my idea’s that I currently have. To be honest, I have more idea’s but I thought they weren’t good enough to make the cut. It’s possible that I might write another article on this here, so I hope to see you next time here.