Basically, it’s a writing competition between bloggers we are doing for fun. I could explain everything in detail, but the organizer has written a very long blog post about it. In this post, you can find all other bloggers who are in this competition. So, feel free to read this post if you want more information.

So, I have the honor to start in the first round and start the first “battle”. So, today I’m presenting you with this: 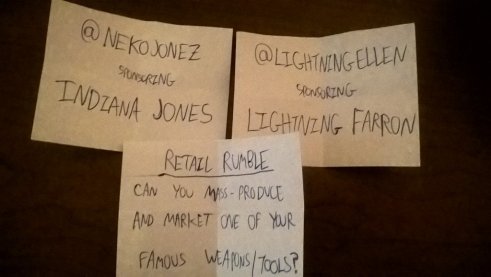 Basically, the goal of this round is to convince you and the judges that a certain iconic item of the character can be mass produced and sell the best. For example, Minecraft Steve can mass produce diamond tools and sell them at a high price.

Since I choose Indiana Jones as my character, I’ll try and convince you about what he could mass market and sell. Oh, if you don’t know a lot about Indiana Jones or want to read a bit about his background, well… here is a massive article from the Indiana Jones Wiki telling every adventure in order from all the movies, games, books and other media: http://indianajones.wikia.com/wiki/Indiana_Jones

If you want to read the argument that Lightning Ellen makes, feel free to take a read at her blog here: https://lightningellen.com/

Her character will be Lightning Farron from Final Fantasy XIII. If you want to read more about the character of my opponent, here is a link to her page on the Final Fantasy Wiki: http://finalfantasy.wikia.com/wiki/Lightning_(Final_Fantasy_XIII)

The results will be announced on Friday the 4th of August on the Adventure Rules blog, so we shall both check there! So, I hope you are ready since here comes my argument! Also, the rules state that the argument can only be 500 words long. Just a little side note. The rules can be read here: https://adventurerules.blog/2017/07/27/blogger-blitz-rules-and-regulations/

So, may the best argument win!

Dr. Henry Indiana Jones Jr. got a special phone call after he finished his classes at the Marshall College. It was his other boss, the one with the big ears and the big white gloves. The conversation was brief, but it made Indiana nervous.

He had to go to his office and pitch something new to convince him to not go for another project. He thought about it for a while and after he created a prototype, he went to the office of his boss.

When he was walking towards the office, a young girl with long pink hair walked outside. Then he realized, the other pitch was for Kingdom Hearts. He got even more nervous. There was only room for one more project and he wanted that spot.

Indiana’s plan was simple, to sell new merchandise to attract new fans and try to ease the pain of the disappointed fans that saw the Kingdom of the Crystal Skull movie. He had to make and present something good, otherwise, the release of the new movie in July 2020 might be a flop and that would mean possibly the end of his franchise.

After the young girl left the hallway, he knocked on the door. He knocked a few times in rapid succession. It didn’t take long before he could enter the office. But, this time, Indiana wasn’t alone with the mouse in the office, his wife was sitting in the office as well.

Indiana didn’t hesitate and started his pitch. He started to talk about how the merch sales are declining and they needed to come out with a new item so that they could hype up the 5th big movie. Indiana’s plan was simple. He wanted to make a new line of costume sets.

This would serve several purposes. It would be very handy for people that want to cosplay, act in theaters, make fan movies, collectors and so on and so forth. The mouse was happy to see something that iconic being pitched in front of him.

Yet, Indiana wasn’t done with his pitch. There was another layer to his idea. Since he was nearing his retirement, he also wanted to sell the costume set to create a great competition for his replacement actor. Since, that would make it easier to set up some sort of show, “Who will be the next Indiana?”.

The costume set would have everything, the fedora, shirt, jacket, pants, satchel and a prop gun and prop whip. Indiana didn’t want to limit it, so he created a female prototype. This made the wife of the mouse happy. She found it very cute and fell a bit in love with the design. She tried it on and she was convinced of the pitch. In her eyes, Indiana won. But the mouse, he had to speak to the judges. Since he wasn’t sure who had the best pitch. He both liked the pitch of the pink haired girl and Indiana. So, what now. What now?

Ending of my entry

So, that was my argument. To prepare myself for this, I replayed various Indiana Jones games and rewatched all movies I owned. Also, I wanted to present my argument in a way how I love to write, in a story.

I highly recommend you read the argument made by Lightning Ellen and decide for yourself who won. But, who will go to the 2nd round? Well, as I said earlier in this article, the jury will decide that and it will be announced on August the 4th. You can find the links for that earlier in the article.

As a little side note, for those who didn’t get it; I wrote about this event. Obviously, I took some creative freedom to fit it into a story only about Indiana Jones. This story has no ill intent to anybody or any company.