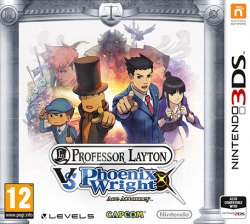 So, let’s not be creative and mind blowing. Oops, too late. Yesterday I posted a picture on my Twitter with my holding the box of this game. My apologies of the blurry image but my webcam isn’t the best in my gaming laptop. After playing it on college breaks and today, I finally got far enough to write my first impression. And my honest apologies to my buddy who had to cancel his pre-order. I had to zip my mouth about it and not brag about it. Well, brag… It was more like me not shutting up about the game here and there. I didn’t spoil him. I didn’t tell him about the Story. Yeah, intentional cap there. Anyways, let’s get this ball rolling. The first impression I wanted to write for months. Feel free to leave a comment with your opinion about this article and or this game. 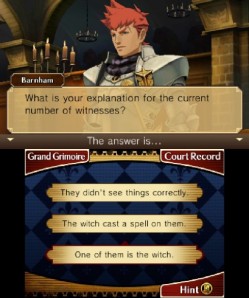 I apologize if you expected me writing in a style where I mixed a mystery or a puzzle with a court. Nah, I’m adapting my usual writing style for this one. Why? Because in the game the story is like that as well. While the Layton and Ace Attorney series are written in two completely different ways, the game mixes the styles prefect!

Honestly, I have a special ability. Because I wrote so many stories and articles I’m kind of able to predict how a story or plot is going to end. I can’t predict each and every turn but I mostly see the outcome of a plot. But this game has me puzzled. While the game’s plot has some similar elements to a story I wrote once in my childhood, I can’t figure out how the story is going to go.

The point that I’m trying to get across here is that the story blew me off my socks. While experienced writers can see some plot twists coming at the start, the execution and the writing is so well done, it catches you off guard easily.

I won’t talk much about the story because I don’t want to spoil the fun. I’m mostly aiming this article at the people who need that last push to buy this gem of a game. And the story alone is strong enough to be a selling point for this game. The story isn’t weak or too far fetched for both universes and really fits nicely into the existing stories. 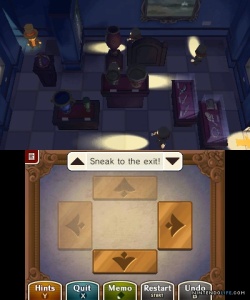 This game, is just extremely good. First of all, I have to admit that the all puzzles in Professor Layton started to bore me a bit. Not that they are bad games, not at all. But I wasn’t pleased at the heavy focus on puzzles. I wanted to challenge my mind on another way.

And this game nails that. With a smart switching system between the formula of Layton and the formula of Ace Attorney, this game is a blast to play. It was hard to put down because I find it has barely any flaws gameplay wise.

And honestly, that’s the biggest and only flaw I have seen now in terms of gameplay. There are some other minor flaws or missed opportunities. Let’s talk first about a big irritation I have with the game.

Some lines are voice acted. While I would have done some voices with more emotion, this game has a big issue with deciding who’s line should be voice acted and which shouldn’t. There were parts at the first trail where only one character was voiced. Mixed with just dialogue boxes threw me off a bit.

And the saving menu is a bit, lacking. Let me put it that way. You don’t have a delete save option. And they adapted the way of saving in the Layton games. I always had a major issue with that way. Don’t display a list as save slots. I truly think the PSP had a better way for this. To avoid saving in slot 2 by accident. 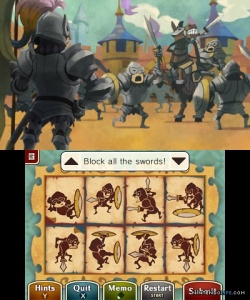 So Layton’s puzzle addiction is finally integrated into the story. They don’t talk about “crack this puzzle and you can pass” things. They finally used “prove yourself with this test” and things like that. A huge improvement.

While that’s not the only thing that got an improvement. The way how you can recap a story is an extremely nicely done feature. You can recap parts of the story as you please. It’s played out in a short scene so you are up to date again.

And in the Layton sections, they “fixed” the controls. You can now explore the rooms with the d-pad and the circle button. Thank the lords for that change. Always having to use my stylus is not that handy when I’m trying to drink something. For example. It’s just convenience.

And you can see how many hint coins or puzzles there are hidden in one area. I slow clapped to this change. One they should have done a long time ago.

I read some articles about people not being so happy with this game. And I read some people who played the Japanese import. And I honestly disagree. This game is a blast to play. While this article is slowly coming to an end, I invite you to discover this game for yourself. I might not have talked about the music, controls, gameplay (bit more in depth), design, animation and difficulty… I promise that I will talk about those things in my review. I will say now that I barely have complaints about them.

Thanks for reading and I hope you enjoyed this article. And now, I continue to play this game. Laters!