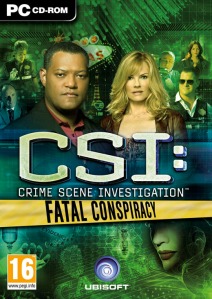 Lately, I’m getting quite a lot into the series of CSI. I’m currently watching the original series to the end. Then the spin-offs. But the games, oh man, the games are something special. Published by Ubisoft and developed by TellTale Games. This game has mixed reviews all over the board. I have seen reviews ripping this game a new one and I have seen reviews praising this game. This is the latest PC game that came from the series. I have beaten the first two cases and I just started the 3rd case. Is this a good game in my opinion? Is this a game made for fans of the series or can it be played by everyone? Well, I took a look from both angles. So, I won’t get the criticism that I gave this game a positive review because I’m a fan of the series. So, let’s dive right into this game. And as usual, feel free to leave a comment with your opinion on the content of this article and or the game. 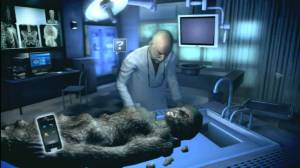 It’s quite clear that TellTale games made this game. The formatting is just like their other series. The game is 5 cases long. During the game, you get another partner every time. What seriously amazed me is that the characters from the show actually did the voice acting for this game.  This give me goosebumps. One of the goals of these games is trying to give you the feeling that you are part of the team. The voice acting helps a lot with this.

The writing is done on a very clever way. Some lines are left out. Information your brain can easily fill in. Questions you would ask if the game was voice controlled. This helps draw you in a bit more too.

Storywise, this game starts off quite interesting. The idea of having a storyline over the whole game instead of having five separate stories makes it very interesting. The only minor complaint I have here is that the pacing is a bit off. It distracts a bit from the case in my opinion. Truth to be told, you can’t avoid it.

Why is it bad? 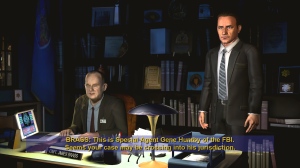 Visually, this game doesn’t look that well. This game has been released 5 years ago. I know for a fact that visually, games can look way better then this. Tomb Raider Legend, which released 4 years prior, looked way more cleaner then this game.

So, I played a little bit more of the game and found some blurring issues. It would surprise me if my computer is at fault here. I’m extremely sure it can run this game three times without slowing down my computer.

But for a licensed game, visually this game looks quite fine. Some things could have been animated to look a bit better. So, after closer inspection (see what I did there) the issue with the visuals is that some things like hair aren’t animated which giving the visuals a bad impression to a PC gamer. Thankfully, in an adventure game the graphics aren’t the priority. The actual adventure is a bit more important.

One thing I find a negative in this game is that you can’t walk around. In a previous installment, you were allowed to walk around on the crime scene. I was hoping they implemented this again. But now, it’s back to the old point-and-click interface. Which is quite fine by me, expect for one flaw. In the game you are scored on how thorough you are. A visual indication for this would be nice, there have been various times that I was searching on a spot that was actually clean. They did this in the previous installments.

Another thing I don’t understand is that they cut the lab into two area’s. It’s rather annoying when you need to switch between the two places. Also, it’s annoying to see a number showing with the evidence. I can understand that it’s to help you remember that are is something that needs your processing, but you have no visual indication which item you still need to take a closer look at. That number also doesn’t decrease when you investigate it with the proper machine.

Oh, I talked a bit earlier about the lab. Some instruction videos actually didn’t work and it played part of the intro for this game. This is the weirdest bug I have seen for quite a while.

The GUI (graphical user interface, the menus and such) in the lab is a bit lacking. In the past it was easier to switch between evidence. Now, you need to restart before you can continue.

Yet, the worst two issues is that you can barely alt+tab out of the game. Your screen will show some weird bars like a smashed LCD screen. And related to that, sometimes the sound cuts out on a scary way… as your headphones just popped. 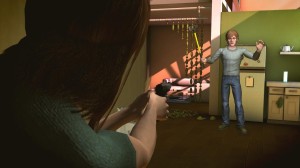 Apart from the visuals, I find barely any major flaws, apart from some nitpicks here and there, in the game. The soundtrack in this game feels a lot like the series. Music that won’t go to your music library but is perfect to set the mood.

The design of the crime scenes and the locations you visit are well thought out. The “hiding spots” for the evidence are sometimes so well hidden, it’s easy to look over them. This is very lovely, since this gives the game a more challenging nature.

Also, there are achievements in this game. For the people who want to 100% this game, this is some replay value. You can try to avoid making the mistakes you made in the first playthrough.

The tips system is more streamlined. Sometimes you get mails from the night shift supervisor telling you what you should do or might overlook.

Is this game perfect? Hell no, it has some flaws that might hinder the experience. Is it good? Yes. Is it for everyone? Not really. I would recommend it to fans of the series and adventure gamers. I would also recommend it to people who like to solve crimes, virtually or in the real world.

If you are able to look past a few minor issues, this game is quite well crafted. When the developers had a bit more time, this game could be a bit better polished. That’s all I have to say about this game in my first impression. If I finish it, I might write a review about it and go a bit more in depth about certain area’s of the game.

In any case, I hope you enjoyed reading this as much as I enjoyed writing this for you guys (or girls). I hope to welcome you at another article. But until then, have a nice day and game on~