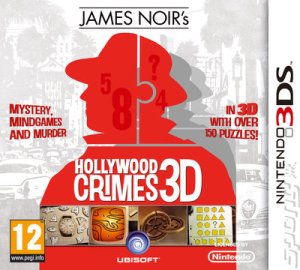 Wikipedia entry of this game.

Before I got myself the latest Professor Layton, I played this game on my 3DS. It’s one of the first games I finished on my 3DS. All over the internet, people find this a mediocre game. In this review, I will tell you if I agree or don’t agree. Let’s try to look at this game separate from Professor Layton. In my previous review of Corpse Party on the PSP, I compared the game way too much with Virtue’s Last Reward and thankfully a forum member pointed it out. Thanks for the feedback BloodCatNS. Anywho, this game is created by Ubisoft, the guys behind a load of pet games on the DS and the very successful Assassins Creed. Did they create a great game here or are the reviews pulling at the right end calling it mediocre? Let’s solve this bad-boy and crack the codes. Time to review this game on the 3DS. Oh, the game has its own site, but I didn’t link it since it’s inside a collection site of all 3DS games Ubisoft made. But the Wikipedia article contains all your information needs. 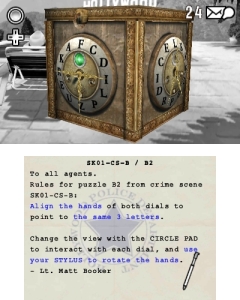 Let me tell you, this game suffers from a lot of cheese. Wait, you aren’t following me? Well, the story is extremely cheesy. It’s a story you don’t need to take seriously at all. The story was one I could predict nearing the end.

The voice acting added towards the story being cheesy. I’m glad to see that this story doesn’t take itself seriously and frankly, it helps in this game. The story feels a fresh change of pace instead of having a weak flat story that you barely remember in the end.

The consequence is that the story is somewhat memorable. It has been a few months since I played this game, and I still remember parts of the story. And that are signs of a well-crafted story.

I’m not going to lie or praise a bad story too much, but it isn’t too bad that it takes you out of the experience. The point I’m getting across here is that it does its job but doesn’t go beyond that to try and impress you. But what’s unique is that at the start of the game, you have to take a profile picture of yourself and when your character looks in the mirror, you actually get a live feed from the 3DS camera, which is an amazing idea. This pulls you in the game even more since you feel involved.

Creative, yet done before. 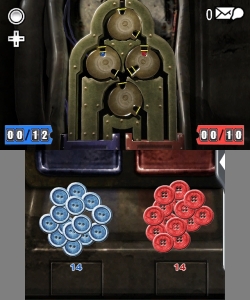 This game gives me the impression to be a very creative one, yet I sometimes felt that some puzzles have been done before. This is mainly because of the unique use of puzzles. There are sliding puzzles and many classics but there are also new puzzles I haven’t seen a lot in games like these.

Many puzzles are quite challenging. Like the puzzle in the screenshot, I even needed to take out a notepad to make notes. And if a game manages to make you do that, it’s a good game in terms of puzzles. I heard in another review that the puzzles feel fresh, and I agree. In the story, you play in a game show to look for a killer. And thanks to this, you can choose which puzzles you solve. This helps with the replay value of the game and when you don’t feel like solving a sliding puzzle, well, you can take other puzzles.

You also get fan mail and hate mail too. This is an extremely neat addition in the game. It feels a bit like the downloadable puzzles from Professor Layton but you don’t need to do the effort to actually download them.

The amount of puzzles is great too. As far as I know, there are about 150 puzzles you can solve. And this will take a great deal of your time.

The 3D doesn’t add a whole lot to the game but I think that isn’t such a big deal in these puzzle games. 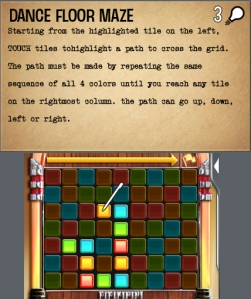 Where does this game fall felt on its face? Well, that’s an easy question. The game repeats the story way too much. I rolled my eyes at the number of times the game got stopped where you got an overview of what happened. I have seen games that do this way better. Another Code: R, for example, has a small quiz at the end of each chapter and Professor Layton displays a summary before loading your save file.

Also, the graphics are where I think they made a wrong turn. While the backgrounds and the puzzles look great, the characters actually don’t look all that neat. They feel like early green screen and quickly pasted on the backgrounds. They feel somewhat out of place. And I don’t like it.

Another part of the game that doesn’t do a great job is the music. Normally I remember the music of each game I play but from this game, I can’t remember any melodies. Vaguely I might remember parts but the music is a missed opportunity.

Also, there is an issue with the length of this game. It might have 150 puzzles, this game can be easily beaten in a few days. The game is short, way to short for this style of game.

And what’s a big shame is, yes there are typo’s in the game! And not one or two, there are a few. Almost like they forgot to proofread this game. An example is this screenshot you can easily find some grammar issues. “TOUCH tiles to highlight a path to cross the grid.” Yup, that’s this game for you.

I’m out of things to say about the game, time for my conclusion.

+ Your face in the game, man I have never felt more involved.

+ Great freedom in choosing your puzzles.

– It’s over way too quickly.

– The music is generic.

– Way too many times you get reminded of what happened.

Is this a good game? Yes, it is. Is this a great game? No, it isn’t. The game has a certain charm that hasn’t been created in a long time. Yet, it’s too flawed to stand out. It also doesn’t do anything new. It’s just a puzzle game. I can barely bring up arguments to tell you why this game is better than the others.

Comparing this to Professor Layton isn’t doing it any good either. Then this game feels like shovelware. Yet, this game still has its moments. So, if you can pick it up for cheap, I would recommend it.

This game comes recommended as a snack, to play between two game releases you are waiting for. But don’t expect an amazing game. It has too many missed opportunities for that.