As somebody who works in a school as an IT guy, I’m interested when a game does something that is somewhat school-related. Today I’m going to talk about a game that does something of that nature. Well, the connection might be a bit far fetched but hey, it’s there if you look far enough. So, today’s game is Drawngeon. The publisher Drageus Games gave me a press code for the Nintendo Switch version. In this game, a drawn dungeon comes to life. Now, this game is rather cheap so it might turn people off. But, should you be turned off by this game or is it totally worth your time? Let’s find out in this 100% my honest opinion game quicky review of this game. And as usual, feel free to leave a comment with your opinion on the game and/or the content of this article in the comment section down below.

Editorial note: During the play sessions and writing of this review, an update came out. It’s possible that some complaints might be fixed in a future version. This review is written on v1.0.3. 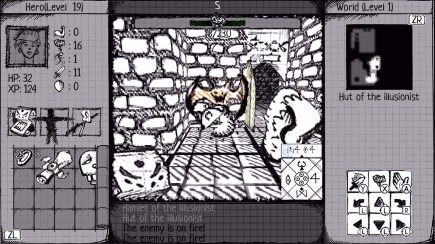 In this game, you play as a nameable character that is going to explore the drawn dungeons of this world. I think that the store page explains the story better then I can explain it.

The life went on as usual in the Inkland, until the Tower has suddenly fallen straight from the sky!
Many heroes tried to solve its mystery, but none of them succeeded! Maybe it’s your turn to test yourself?

For those who don’t know what “procedurally generated” means, let me quickly explain it. It means that every time you enter the game, the layout will be different. If you have ever heard about Pokémon Mystery Dungeon, it’s the same basic idea. I find this quite surprising in a good way. For a cheap game like this, the fact that you can replay this game multiple… well, it gives you even more bang for your 4-5 bucks (Depends if the game is on sale or not 😉 ).

This gives the game more variety as well.  Every playthrough will be different. There is a game that’s quite similar to this one in concept and that’s Delver and Eldritch.  These games throw you into a dungeon as well, where the layout and enemy placement is very different every time. And I enjoyed those two games quite a lot. What I’m saying is that I enjoyed my time quite a lot with this game.

The game looks amazing. It looks like somebody drew his whole ideal Dungeons and Dragons lay-out in a sketchbook during study hall or something of that nature. The little use of color makes the items you can interact with stand out that much more.

The further you get into the game, the more bonus material you unlock. These are mostly concept art but they are a nice view of the development of this game. Now, there is a collectable that makes a cat person like me extremely happy. There are a ton of hidden cats all over the map and they are a joy to collect! 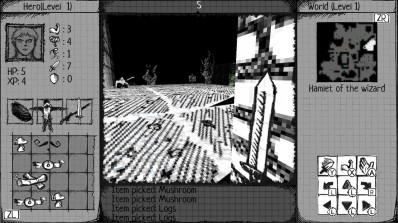 Now, the game looks quite nice. I mentioned that before. Yet, there are a few things that ruin the immersion a bit. For example, the game has a problem with slopes. You can look right through them from some angles. You can see an example in the screenshot here. The void or the textures from the block behind are clearly visible.

But that isn’t the only problem I have with the visual presentation of this game. The big issue I have comes with animation of especially the battles. During a battle, which isn’t turned based but rather in realtime, you get an indication that you got hit. But, there is no indication that you hit the enemy. Yes, the text underneath the playing field tells you that you did or didn’t do damage to the enemy but why isn’t this visually shown like hits on your character?

Now, I can totally understand that a game of this nature needs to have a certain difficulty curve. But this game’s difficulty curve is a bit too much. I have no problem with enemies taking 3 to 4 hits to kill when you start the game, but the damage you get versus the damage you can do is a bit too much. Similar games like Delver are more balanced and make the game a bit more enjoyable to play.

The second issue I have with the controls is inventory management. The fact that there is no tutorial section, makes it extremely difficult to easily figure out the mechanics of the inventory. It took me some time before I was able to throw items on the ground, move and equip them. This brings me to another issue with the UI. But more on that later.

The 3rd issue is the fact that there isn’t a run button. This makes exploring the map a bit boring. Especially when you are restarting for the 10th time. You have seen most of the early area and you want to get through it as quickly as possible.

When you equip a stat-boosting item, it appears that your stats stay unchanged. Your stats are displayed next to your character portrait and those stay the same no matter what you equip. In addition to that, I don’t even know or understand which stats are what. Now, the description of the items changes color when it’s an improvement but it’s in orange. Why not green or red like in any other RPG?

The sound design is a hit and miss story. While the sound effects add to the immersion of this game, sadly there aren’t enough sound effects in the game. For example, the sound effects for most of the enemy’s movements are exactly the same for bats, spiders, and other monsters. This is a big shame since a lot of players use these sound effects to know which enemies are coming to properly prepare themselves. Now, the music or the lack thereof really adds to the atmosphere of the game. The music that’s present is really well done and gives off the tense atmosphere that the game has.

Something that I found, on one hand, interesting and on the other hand extremely annoying, is the fact that to level up or boost your stats, you have to go to a tree at the starting village. It’s an interesting way to level up your character but it’s annoying that you can’t do this in a menu like almost every other similar game.

And with all that said, I have said everything I wanted to say about this game, so I think it’s high time to wrap up this article with the conclusion and my thoughts on this game.

If you read this article, it might seem that this game has a ton of flaws. And I have to admit, this game has extremely rough edges that can frustrate a lot of players. But on the other hand, this game does have a lot of positives that make the game extremely enjoyable to play.

The big problem is that I have seen and played better games in this style. And even on the Nintendo Switch: One More Dungeon is an example. So, is this game a bad game? Well, yes and no. It has its problems and shortcomings but it also has a lot of strong points.

This game is like a broken phone screen. It still works and it’s still a decent way to use your phone but the more the cracks start growing and showing, the more you have to get used to the shortcomings or replace it with a better and more polished screen.

Honestly, I think that this game needed way more time to develop. Since the potential for an extremely enjoyable game is present in this game. But not in the version I have reviewed.

And with that, I have said everything I wanted to say about this game. I want to thank you so much for reading this article and I hope you enjoyed reading it as much as I enjoyed writing it. I hope to be able to welcome you in another article but until then, have a great rest of your day and take care.

So, do you guys and girls remember the movie Ukiyo-E Heroes? It’s a documentary that I wrote about a month or two ago. Well, the crew emailed me again to give some interesting news. So, that’s why I’m writing a quick follow-up article telling you that there is going to be some new things!

So, if you haven’t read the original article, here is a quick rundown.

A journey of discovery into how a Canadian craftsman and an American designer with a father and son generation gap who collaborate to revive the ancient Japanese woodcut (Ukiyo-e) using pop-culture icons: Super Mario and Pokémon, and now Shadow of the Colossus.

If you are interested and you missed the original screening, well then you are in luck! Since there will be a new screening on SD-ComicCon ’17! This will happen on July 22 at 8:20PM.

But wait, there is more. The screening is followed by Q&A with the artist Jed Henry and the director Toru Tokikawa. If you want to know more, follow this link: http://sched.co/BO2t

Also, there is a new trailer that you can enjoy. This trailer can be found currently pinned on their Facebook page.

Sadly enough, I won’t be able to attend the screening; but if you are in the area, I would highly recommend you going to see it. Since the previous screening was a success. Also, there is talk that the documentary might make the journey overseas into Europe.

Before I wrap up this article, I want to share the social media links of this documentary:

In any case, that’s everything I have to say in this follow-up article. Thank you for reading this article and I hope you enjoyed reading this as much as I enjoyed writing this. I hope to be able to welcome you in another article but until then, have a great rest of your day and take care.

Some time ago, the developers from Waifu Fight Dango Style asked me to take a look at their game. So, today we are going to take a look at it. But, I wanted to do something special. I asked my friend Priom to also take a look at this game. He wrote his review over at Arpegi forum. I advise you to read his review first before you continue to read my article. So, in my article, I’m going to quote his opinion and then write mine. So, we are having a “fight” of our own. Before I try to force out a joke too much, let’s get right into the review of this game. Note, that I have put “12+” in the title. Since some visual elements aren’t for younger audiences. But, hey. Enough stalling. Let’s go reviewing. And as usual, feel free to leave a comment with your opinion on the game and/or the content of the article. One thing, I have to stress that this review isn’t a paid review!

Note: This game is still under development. So, the things said in this review might have been changed if an update gets released. We both played Alpha v2.18 for this review.

Do you want to meet the developers of this game? They are going to be attending these cons: Corpus Christi Comic Con in Texas on 22nd – 23th July and San Japan X in Texas on 1st, 2nd and 3rd September.