A year and a half ago, the PlayStation 4

and Xbox One were released, and with E3 on our doorstep, it is perhaps a good idea to look at what the eighth console generation has brought to the table thus far. Has it succeeded or did my reservations prove to be true?

From an economic standpoint, it is an obvious success. This generation of consoles is the fastest growing of all. Demand for both consoles was high from day one and sales have vastly surpassed both manufacturers’ expectations. As of this writing, and the most current data available, Sony announced having sold 20.2 million units early March, but Microsoft’s figures aren’t as comprehensive. Sources vary, but it’s somewhere between 10 and 12 million. Sony’s platform is in a clear lead and it makes some sense. From the beginning, the PlayStation was the cheapest console, as back then the Xbox shipped with Kinect. Microsoft also had many policies people did not agree with; always having to be connected to the internet, not being able to lend games to friends, and so on. Sony happily attacked these policies and it worked. For a while at least, because luckily, Microsoft has been smart enough to make significant changes, including selling the Xbox without the Kinect as mandatory. Sony’s platform also appears to be the most powerful, at least on paper.

But is it enough? Two years ago both consoles were announced, in great detail, and their architecture is remarkably similar. This is where things get a bit technical. Both SKU’s use AMD hardware, for both CPU’s and GPU’s, and feature an eight-core CPU clocked at 1.6GHz, similar GPU’s clocked at 800MHz and 8GB of RAM. There were some differences, though, with Sony’s platform seemingly standing out. First and foremost, the 8GB of memory in the Xbox is DDR3, significantly slower to the PS4’s 8GB of GDDR5 memory. The Xbox does have 32MB of ultra-fast ES-RAM working in tandem with the other 8GB, hoping to close the performance gap. The PS4, though, has an additional 256MB of DDR3 memory and a second small, low-power CPU for background tasks. Later, Microsoft announced it would increase the performance of their consoles by increasing the clock speed of the CPU from 1.6GHz to 1.75GHZ, while also increasing the GPU speed from 800MHz to 853MHz. This closed the gap even further, but Sony’s platform still stands out. The GPU is inherently faster, with 18 compute units compared to the Xbox’s 12, and is coupled to faster memory. As it stands now, Sony’s GPU outperforms Microsoft’s at 1.84 TFLOPS to 1.31.

That brings me to my reservations. These figures are impressive when compared to the seventh generation, but don’t wow me. These consoles felt outdated before they were even launched. It is certainly true that the architecture of a console should not directly be compared to a PC. Developers can code games for a closed system, therefore using the components to their fullest potential, while also being able to optimise the code for that one specific system. To get a similar graphical fidelity and performance on a PC, we should compare it to a computer with a third to half the performance increase. At first I thought the relatively low performance figures wouldn’t be such an issue, since – as I said – this is dedicated hardware. It’s also very close to PC hardware, making coding even easier and thus allowing developers to optimise their games even more. But eighteen months after launch, I am worried this generation will not turn out as great as the one we just left behind us.

Launch games never really impress us, that much is true, but we have passed the launch window a while ago and there’s not much out there that makes me hungry for this generation. There’s Microsoft’s Sunset Overdrive, a game that knows it’s a game and runs with it. It’s silly, bright, colourful and fun. Very much unlike the gritty, brown and gray “realistic” games we mostly get. There’s also Sony’s Bloodborne. True, it’s Dark Souls/Demon’s Souls in a new skin, but it’s a good game nonetheless. Both games are not really my personal taste, but I can acknowledge them as good games. This console generation has already seen a multitude of games being re-released. It made more sense in the previous generation, where we saw a plethora of HD-remakes. There at least, the games came from the SD-era. There’s GTA V, Borderlands, The Last of Us, Diablo 3, DmC, Tomb Raider, the horrendously plagued Master Chief Collection and many more. It’s also not stopping, with games like Devil May Cry 4, God of War 3 and Final Fantasy X/X-2 remakes coming along shortly. And let’s not forget that the majority of games that have been released until now, have been sequels, prequels or some form of re-imagining of previously existing material. Are you enjoying your “new” games so far?

When the Xbox 360 and PlayStation 3 were released, both consoles were claimed to be capable of playing 1080p games. In actuality, those platforms were more like 720p consoles. There are some games that run at 1080p, but most of them are smaller titles. A lot of games – even console exclusives – ran at an even lower resolution than 720p. Halo 3 is one, at 1152×640. The very popular Call of Duty series often ran at an even lower 1024×600. Again, with this generation, 1080p gaming is promised and already not being delivered. Lots of games run at lower resolution settings, often 1600×900. This is also where we see the disadvantages of Microsoft’s platform, with games running at a lower resolution than their Sony counterpart. Battlefield 4 runs at 900p as compared to Sony’s 1080p and Call of Duty: Ghosts produced a meagre 720p, though this was later changed in a patch. Even the Xbox exclusive Titanfall runs at the odd resolution of 1408×792, on an engine that is essentially a modified version of Valve’s Source engine; a very stable, scalable and reliable engine. Still, the console struggles at maintaining its targeted 60 frames per second.

Let’s take Borderlands: The Pre-Sequel as another example. This game is yet another title that was first released on previous generation consoles and is now released again on the current one. Looking at the PC system requirements of this game shows us this is not a very intensive game. Minimum requirements are a low-powered Dual Core CPU, with recommended settings asking for a low-powered Quad Core CPU and medium-range graphics cards that were released four(!) years ago. It makes sense that this game doesn’t require a €1000 gaming rig, since it’s built on a modified Unreal Engine. This is – like the Source Engine – a well established, stable engine. And yet, these brand new consoles that are supposedly so powerful struggle with this game. Performance dwindles around 45 FPS in areas where you need it most: during combat. This also brings with it a great deal of screen tearing. While not a bad result per se, not a result we should expect from these consoles.

Obviously, I am also aware many people can’t afford high-end PC’s or prefer to play on consoles. It is especially for them that I am worried, since they can’t find a better experience of multi-platform games elsewhere. They have to play them on closed systems. They can’t lower graphical settings, or enable or disable V-sync, to change the look or performance of the game. I can choose to go for the PC version. Of course developers get more comfortable with consoles and manage to squeeze out more as time goes on. Look back at Naughty Dog’s games and look at the difference in quality between the first Uncharted and The Last of Us, running on the same, but tweaked engine. Or even Uncharted and its sequel, the release of which was only two years in between. It’s a world of difference, but if consoles already seem to struggle with games across the board, whether it’s performance wise, visually, or – in case of games Assassin’s Creed: Unity – both, what’s next?

All of this doesn’t seem to bode well for these consoles. Initially, I had reservations on the technology being used, but I imagined with this being dedicated, and from PC originating hardware, the theoretical shortcomings would be proven wrong in reality. However, after eighteen months, I’m not convinced (yet). Graphics are good, but not impressive. Especially when compared to the jump in quality from previous consoles to their next generation. Think back to the difference from PS1 to PS2, or PS2 to PS3.

Shiny graphics are nice, but what we need, 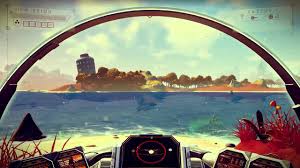 and really need, is innovation in gameplay. Not yet another cover-based, gritty, third person shooter. Not innovation in quality of visuals, but innovation in mechanics. One game I do keep my eye on, is No Man’s Sky; ambitious and innovative. I surely hope it lives up to its claims, as that might – at last – convince me to buy a current generation console. We need innovation in things like physics and AI; larger, more varied worlds full of life and little details that make it all feel rich in atmosphere. Frankly, I am bored with the triple-a games as of late. I sorely hope I am mistaken and things turn around for the better, but looking at the release schedule for the coming months (or even years), I’m afraid I may be right.

To close this article, I’d like to add a little something. I am a big fan of RedLetterMedia and their gaming part: Previously Recorded. Rather than stealing what they have to say about games, I want to link to their YouTube channel. Particularly to their reviews. The ones that I think lie closest to what I agree with are the reviews on The Order 1886, Alien: Isolation, Bloodborne and their video called “Why Mario is more Immersive than Call of Duty“.