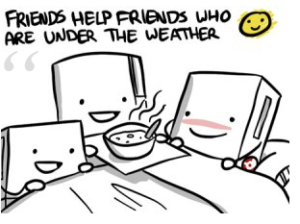 Read more rants for this author.

“The Nintendo 3DS is for kids, the graphics are ugly and the PS Vita is just better. It has way cooler games.”

Really now? Is this how we are fighting the console wars? And is this war even needed to be fought? I realize that I haven’t written an article in a long time, since I’m busy with my college exams, but this is something that got me worked up recently. After a deep sleep of this series, I decided to write a new rant as my return to get this stuff out of my system and so I can continue my life.

Console wars, are they even useful?

To be quite honest, probably not like you expected me to say, but yes. I do think console wars are useful. But not executed in the proper way.

The use of console wars is to allow the fanboys to get in big heated debates for me to laugh at. It’s an use nonetheless.

In all seriousness, I have some arguments why I think a console war is useful. First of all, you learn the gamer to choose each and every new console release. Since most people don’t have the time or the money to be able to purchase all the systems, you make gamers think about their products. Thanks to this, console developers have to pay attention in what they create. They can’t simply slap something together. They need to make something new or better to improve on their previous product.

In console wars, developers can also learn what works for a certain audience and what doesn’t. With this information, a studio can learn which series they should try to get to their console as an exclusive and which to leave in the dust.

But a console wars, is also extremely idiotic. Think about it for a moment. We discuss about a console hardware and what it can do. This is just plain ridiculous. Take for example the Wii U. Such a great system with amazing potential. But since it doesn’t have great 3rd party support, it doesn’t sell well. And this has nothing to do with the console wars.

My point here is that a lot of the meat and bones of a system is in the software you run on it. I have a crap 2nd Dell laptop that I use to do my research for my blog on and play some low-end games that don’t keep me distracted of my college work for too long.

In addition to that, we compare, like we say in Dutch, apples with pears. The Wii can’t be compared to the PS3. Not in the slightest. We talk about innovation against raw power. Two opposites in the gaming world. Talking about the Wii, why is Nintendo always pushed to the side of the console wars? Oh, and let’s not forget the PC!

That the PC isn’t included, I can understand. Since you can custom build a PC, so you can’t compare it to a console. Since nearly everybody PC specs are different. A computer is personal and actually tells a lot about yourself. But that Nintendo is left out… since it’s more a family console… Err, yeah right. Really fair war there. Leaving out part of the competition.

Look mom, the PS4 is so much better.

This picture I found while researching explains enough. I started talking about it in my previous part, the console wars is just done totally wrong.

First of all, there aren’t only consoles. You also have handhelds. A console wars seems only to be about the consoles. Why is it never boarder to handhelds as well. I simply don’t get it.

Secondly, a console wars can’t be won. The winner of a console wars is the console(s) you own. And as a hardcore Nintendo fanboy, I admit that I have a PSP and a PS2. And I highly enough them. And if somebody bashes Nintendo, I don’t give a care. Unless they say Nintendo is a kiddy company. Then I have a whole slew of arguments to prove the trolls wrong.

And the final argument is, are we going to ignore beautiful innovations, with a lot of potential like the oculus rift, shifto cubs… Or the Steam box. Oh yes, I’m going there. Apart from being incomplete, a console wars never takes new gadgets in to a count. Such a same.

I think I’m going to close off this article. Console wars really make my eyes roll. The urge to slap somebody in the face when they say that a console is better then another is always big. Each console has it’s strong points and selling points. And in the end, the best console is the enjoy were you enjoy yourself with. And besides, the console wars are always plagued with trolls, haters and fanboys. It’s impossible to make a decent talk about it.

Thanks for reading, and I hope you enjoyed reading this ranting of mine. Sorry that it isn’t up to quality to my other articles. (In my personal opinion.) And I hope to see you next time somewhere. Oh, and normally I always ask at the start to leave a comment, but now that I’m sure that you read my article, I’ll ask it now. Since otherwise I just get troll and idiotic comments.