Mini Metro is a game I own twice. Once on Android and once on Steam. Truth to be told, I’m mostly playing the Android version. I play this game quite meta… Since I play this game mostly on the train to work. Yup, playing a public transport sim on public transport. But is it worth your time to play it yourself? Let’s take a look at this game in this game quicky. And as usual, feel free to leave a comment with your opinion on the article and/or the game in the comment section down below.

The game is so simple and easy to understand, there is no tutorial really needed. You need to draw lines between the stations so the right shaped dot can go to the right shaped station (the white and bigger figures in the screenshot).

The UI (user interface) is amazing! I love how the menu system is set-up as a sort of poster you find in the subway system.

The visuals of this game are kept really simple and clean. This way I can focus more on the gameplay. Also, I love there is a day mode and a night mode. There is only a visual difference between the two modes. It’s like the “dark theme” in various Android apps. Speaking of the visual design, you are able to “move” lines so you can make your network more visually pleasing.

The screenshot feature is lovely. This way you can make your own screenshots to share. Since the game is randomized each and every time, this is a fun way to share your most amazing moments in the game.

The game is really addictive to play. When I’m waiting for the doctor or the train, I play this game on my tablet. While this game could be played on phones, I think it’s more fun to play on a bigger screened phone or a tablet. This game is really challenging as well. I have almost finished all the maps, but I’m stuck at the last three maps.

At first, you think that 16 levels aren’t that much. But you can play each level in 3 modes. And not only that, you can keep playing these levels after you have beaten the goal to advance to the next level. Also, each gameplay mode offers a new style of playing. You have a normal mode and a hard mode. In the hard mode, you can’t erase tracks. And the 3rd and quite recently added mode is an endless mode.

This game gets bug fixes and new options very regularly. Oh, and before I forget this game got recently a new gameplay mode. The endless gameplay mode! 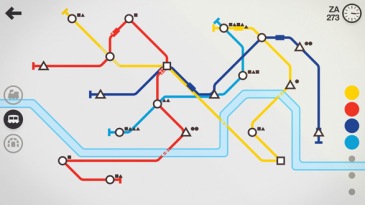 I have to go real nitpicky to find negatives for this game. So, here are the negatives of this game.

In some maps, I don’t like the color combination of the lines that much. Some colors don’t fit each other in my opinion. But, while playing, I don’t mind that much.

In the Android version, I miss a feature that’s present in the PC-version. And that’s a way to remove a line completely from the map to redraw it. That would be extremely handy.

When you have more than one line arriving in a station, it’s sometimes difficult to select the right line. In some cases, I had to try three or more times before I was able to pick the right line.

Sometimes, it’s confusing to understand why an empty train doesn’t pick up any passengers and rides to the end first. I have seen this happening more than once but it doesn’t happen all the time.

This game is way too cheap. Seriously, I see this as a negative. This game is worth more money than the developer is asking for it! I would gladly pay double to play this game on Android.

The only real negative in this game is the soundtrack. Maybe it’s just me, but the soundtrack in the Android version is nothing to write home about. I even think that there aren’t more than 3 tracks present in this game. And if I remember correctly, there is more music in the PC-version. Yet, the music present is pretty good and is nice to listen to. I think that more variation would help the game a lot.

If you are looking for a great time waster for a real cheap price, look no further than Mini Metro! It’s one of the best games I have ever played on Android.I can’t recommend this game enough.

The game is almost perfect in my eyes. The fact that I had to nitpick to find negatives for this game tells a lot. If you like puzzle games, you owe it to yourself to pick up this game and give it a try. Casual game fan? Play this game too! Seriously, it’s a fun game.