So, today I want to talk about a point-and-click game called Rogue Quest: The Vault of the Lost Tyrant. Full disclosure, I got a press key from the developer to write this review but the developers told me that I’m allowed to say my full opinion about the game. So, this article is that, my full opinion on this game. Since this isn’t a large game, I decided to write a game quicky about this game. Also, since this game is heavily story based, I decided to only post screenshots from the first area to avoid spoilers. I hope you are ready! Since this intro is going on for long enough! Let’s go! And as usual, feel free to leave a comment with your opinion on the game and/or the article. 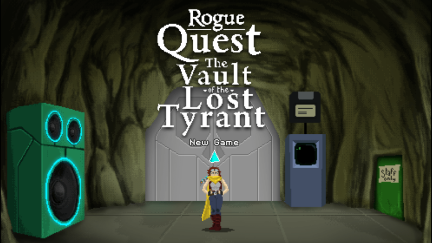 In this game, you play as Cassandra Nech, a master thief looking for a treasure from a Lost Tyrant. After she found the entrance to where the treasure is located, she gets in some trouble and your adventure begins.

Now, I really like the writing in this game. It’s really well done and made me laugh here and there. This game doesn’t have voice acting, which can be off-putting to some people, but I think it added to the atmosphere of the game.

The game tries to mimic a LucasArts point-and-click game like Monkey Island or Grim Van Dango. They succeed in this perfectly in my opinion. Together with the amazing pixel art and visuals, I really felt that I was playing a game from that long forgotten golden age for adventure games.

I really love the main menu of this game, it’s shown in the screenshot you find a bit above this paragraph.  At the left-hand side, the giant speaker, you have the options menu. Then, in the middle, you have that large metal door. That’s the new game option. To the right of that door, you have the load option. And then, that door to the right, you have the credits. The exit game button is if you click at the bottom of the screen like you would be leaving the area. I love menu systems like this.

During gameplay, the interface is really handy to use. I also love that there is a really helpful hint system to help you with the puzzles when you are stuck. Not to say that the puzzles are too hard or anything of that sort, some of them really make you think. Once or twice, I had to write down some things to solve a puzzle.

The sound design of this game is really well made. The sound effects really help you to immerse you in the game.

The controls for this game are really good too. The fact that you can press the space bar to see everything you can interact with, helped out a lot.

For those who like them, this game has Steam Achievements. The full 7 of them, and one or two are really tricky to get.

I really liked the credit scene. I’m not going to spoil it but, it made me smile from ear to ear.

The last big positive is that this game is really cheap. You can buy this game for 4€ on Steam. 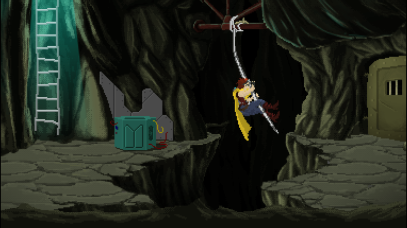 The animation in this game is pretty good, apart from three things I think can be improved. One, when you are pulling a switch, some weird pixels appear above Cassandra. Or that might be because I played this game on a big monitor.

The second thing that should improve in terms of the animation is the grab animation. In various cases when you are going to climb a ladder, pull something down or doing any action, the same animation played. I really wish there were some different animations.

Something I think could use a small bit of improvement is the save system. Now, I don’t mind the 5-save limit. What I do mind is the fact that I can’t name my save files or know what location I saved. This is a minor detail that is always really helpful in adventure games.

Now, I was about to complain how I didn’t like the fact that the dialogue text goes automatic, but the developers said in the Steam forums that they are considering patching something in for this. 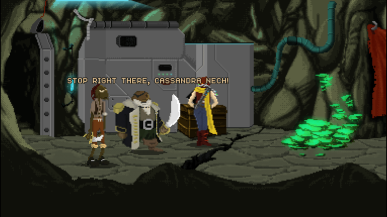 Something I really found disappointing in this game is the fact that this game is way too short. You can fully complete this game in about two hours.

The ending gives makes me want more about this game. I truly wish the game had more content since once I was getting into the game, it was over.

My other big problem with the game is the soundtrack. Now, the music in the game isn’t bad in any sense of the word, but they use music that they don’t make themselves. While there is nothing wrong with that since not everybody is a pro at making music and making music is hard work and expensive. But, I feel like they have a missed opportunity here.

It would have been more awesome if there was sometimes a bit less music and a bit more ambient background noise. The game takes place in a cave after all. Also, sometimes I felt like the atmosphere of the writing and the visuals didn’t always fit the music as a glove.

But, that’s everything I wanted to say about this game, so it’s time for my conclusion.

So, I recommend this game to casual players, adventure gamers and people who enjoy the old point-and-click games of LucasArts. This game is a really cheap 4€ adventure you should give a chance.

After I played this game, I really got interested in all other titles of this developer and I’m planning to give a few of their other games a try.

This game lacks some polish in some areas, but in most areas this game is good. If the developers polished it up a bit more like I said in this article this game would be great.

Thank you so much for reading this game and thank you so much Expera Game Studio for giving me a review copy of your game. I hope you enjoyed reading this article as much as I enjoyed writing it. I hope to be able to see you in another article but until then, take care and have a great rest of your day!