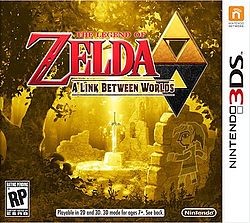 Well, some of you guys might have already finished this game. Yet, I have not. There are a few games I’m playing during my free time so this one I play in parts. I have also a link to another world. It’s called real life. College is bothering me as well. Read as, giving me loads of work. Yet, I enjoy it. I would love to succeed in my future profession as a teacher. Anyways, enough about that. I got with the pre-order a special bonus. A chest that could open and close at will. And when you open it, the melody plays. You all know what it’s. It’s the chest opening sound. Anyways, this game is highly praised. Will this first impression add to the praise or will I rip this one apart? Of course not that last one since I’m such a Zelda fan. But I have some issues with the game. Oh yeah, I nearly always forget to add this part. But leave a comment with what you think of this game and / or my article. Thanks in advance. 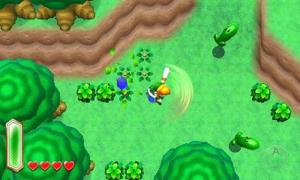 To be honest, when I saw the original teaser trailer, I was put off from playing this game. The graphics looked so ugly. Thankfully the finished product looks a lot better. Yet, I don’t think this is a graphic style for on portable devices. It more reminds me of games on the Gamecube then on games on the 3DS.

To be fair and objective for a second, the graphics are amazing. But like I already mentioned they aren’t my cup of tea. At least, not on the Nintendo 3DS. I’m a bigger fan of the design of the previous games. But I give credit where credit is due. The design of the enemies are similar to the previous game. I’m talking about A Link To The Past here, since this game is a sequel.

Fans of my blog know that I normally write about the story first. But I wanted to tackle this graphics part first. Since I honestly don’t care that much about graphics. Yet, I think some things in this game don’t look like they should. They don’t blend in with the rest of the look of the game too well for my taste.

Anyways, enough about the graphics. The animation of this game is well done. It looks alive. Also, the throwing of the spears from the enemies is perfect. You see a downwards motion and that’s just mind blowing.

The story in portable Zelda games is never deep as in the console games. But this game actually challenges my statement. It builds on the previous story unlike the sequel of Ocarina of Time, which is Majora’s Mask. Also, the story is what YOU make of it. And now even more then before.

Out of order dungeons. They are finally back! One of the last times I can remember that you could do that was in Zelda I. The very original. In all other games you have to go from one dungeon to the next since you needed a certain item. But about that more later.

The story is played out nicely. Ganon returns but not on the way I suspected it to be. Also, the other world isn’t the past. It’s a mirror version of Hyrule. And thank the triforce for that. Nintendo really knew that they should make the other world something different.

But I can’t give my full opinion about the story yet since I haven’t finished it. But I promised to talk about the items later. And now is the time. You can buy and rent nearly every item in the game from the get-go. While this has me still mixed, the mechanic actually works and provides additional challenge. Renting an item costs you 50 rupees.  And buying, well at this point in the game, 800. While it’s true that you can farm out rupees, it makes you think about spending them when you don’t farm them.

This makes the dungeons not having an item in them. So, it’s basically a rush to the boss. Is the game easier then? Well no. Some dungeons are extremely challenging. And some puzzles are as well. Thinking out of the box with the mechanic that you can merge into walls is just great. First I thought that it would make the game easier and give you the ability to skip puzzles due to being able to go over holes. Yet, with some well placed design, this isn’t possible.

So, I’ll go more in depth in my review. But because this is my first impression, I’m going to try and keep it short. So next up is the music. And holy smokes is it beautiful. It might happen that the music makes it on my favorite game music lists. Yeah, those articles. For some reason, I really enjoy writing those. And this music truly inspires me to write more. Many Zelda tunes are in this game. New music as well. Also, the themes are recognizable from the older games while it still manages to keep fresh.

Also, when you merge into the wall, the music sounds like you outside of the game area. Like you are approaching the game world. And that you hear the music. Lovely touch.

While I hate the save points, it provides a nice challenge. They went from the ability to save everywhere to save statues like in the previous Wii title.

Backtracking is thankfully a thing of the past! You have now a bell for calling a witch that will drop you off at any activated save point.

Wait, I’m nearing the end of the article and I haven’t talked about the controls and the new inventory system. I try to keep these kind of articles at the same length and now I’m really nearing the end. So, I hope you enjoyed reading this article as much as I enjoyed writing it. When I’m finished with this game, I’ll surely write a review about it. So, keep your eyes open for that. But until then, let’s save Hyrule!