Another retro-inspired game? I know, we have seen quite a lot of them lately. But, this time, it’s quite different. Today, I want to talk about Griff the Winged Lion. A retro-inspired game by major titles from the 5th console generation. Games like Spyro and Crash are two of the biggest inspirations for this game. So, in this preview, I’m going to talk about the released press and promotional materials, the provided demo and what my ideas are for the game. As usual, feel free to leave a comment with your opinion on the game and/or the content of this article.

If you want to support this game to see it completed, you can help the developers on KickStarter!

If you want to check out the press kit for yourself, you can do it right here. In the provided press kit, we can read the story. The story is about Griff, a king’s son who goes on a journey to find answers about his mysterious fate.

I think that there is a lot of potential in the story. Since my experience with gaming stories and writing stories myself in the past is telling me that there is going to be more than just that. I’m convinced that the story presented in the press kit is just going to be the tip of the iceberg. Something is going to happen that changes everything. I’m quite curious to see what it will be.

So far, the characters that get described are an amazing throwback at the characters from the games they took inspiration from. I can’t wait to see how everything will fit together into one story.

When I keep reading in the press kit, I see some features that get me excited to play the full version of this game. First, the fact that there will be 5 playable characters gets me excited. I enjoy adventure platformers where you have to switch between characters to solve puzzles.

Second, the fact that this game is based on mythological creatures, I can’t wait to see which mythologies get covered. I have a soft spot when it comes to mythology in games…

Third, the voice cast for this game is well-known actors in the scene. The 4 names that are listed are impressive. If an indie project like this has such a great voice cast, I can’t wait to see the result.

I really urge you to look at the press kit since there are a lot of screenshots to be seen to give you an idea of the final product. Also, check out the KickStarter page, since you can download the demo right from there. Speaking of the demo…

The demo of the game is quite short. Maybe a bit too short in my opinion. I think it would be fun if there were one or two levels available to play in the game. Since now I only got a basic understanding of how the controls will feel and how the game will look visually.

There was one issue in the demo that I found very annoying. The fact that the “enter” button was used to select and both go from full screen to windowed mode was annoying.

One thing I would love to see changed in some parts of the UI still looks a bit too modern and out of place in the 5th console generation. Especially the character portraits in the top left corner. But then again, this is an early build so I can excuse that.

Something else I didn’t like was the fact that you could get yourself stuck when you go to the king. There was no way back up, so I had to restart the demo to explore the rest of the game. There is a way to get out there, but it took me a bit too long to figure that out.

One minor detail that you could change but would make it a nice touch is to change the XBOX controller into a PS4 controller on the control screen. Since you draw inspiration from games that are published on Sony systems. See where I’m going with this? It is in the details.

And that’s everything I didn’t like about the demo. The music, the visual presentation, the controls and everything else looks quite promising. While there isn’t too much to do in the demo and you can “finish” the demo in 15 minutes, I really want more. I want to see more and see this game get fully developed. Since, after I played this demo, I’m bursting with ideas. Speaking about those ideas…

My ideas for the game 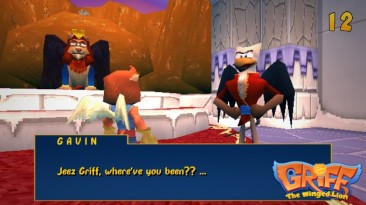 Okay, it’s that time of the preview articles again. A time where I throw around ideas that I would love to see in the finished product. Keep in mind, that these might not even get implemented. These are three ideas I have after seeing all the press materials and playing the short demo.

I think it would be amazing if there is a level where you must use the “turn your enemies into gold” mechanic that is promoted. What I mean is, that you turn enemies into solid gold and must use them as platforms to reach other platforms.

Another idea I had was, give the game a speed run feature. What I mean is, build in a feature that speed runners can use to help them time their in-game time when playing the game. I can see a lot of potential in this game for speed running. So, seriously, grab that chance.

Since this is somewhat of a coming of age story, I think it would be amazing if there is a level where you must guide younger lion cubs to safety from hunters. From what I understand of the plot, the story is about Griff proving that he can become king when his father would pass away.

Overall, I’m quite excited for how the game is going to turn out. I’m crossing my fingers that they reach their Kickstarter goal. Also, if they are unable to reach that goal, I seriously hope that they don’t drop this project. This game has quite a lot of potential and it would be a shame if it died.

If anything interested you in this article, go and look at the Kickstarter page. I seriously think you will enjoy it. You can download the demo I used to base my article on. This can become an amazing tribute to the early PlayStation games and much more.

I have said everything that I wanted to say about the game for now. Thank you so much for reading this article and I hope you enjoyed reading this as much as I enjoyed writing it. I hope to be able to welcome you in another article on my blog but until then, take care and have a great rest of your day.