When I was younger, I found a website that allowed me to play demo versions of popular old DOS-games. From that website I got introduced to games like Heretic, Doom, Duke Nukem, and various other games. Somehow, Wolfenstein 3D was my favorite. I used to play the first few levels over and over again. Then I discovered Heretic, I fell even more in love with that game than Wolfenstein, since it started to speak to me on a personal level. I was always interested in a realistic-ish world with some (or a lot of) fantasy elements. Anyways, I’m rambling on, let’s talk about some old 3D shooter games and let’s get extremely nostalgic. I hope you guys and girls enjoy this read. And as always, feel free to leave a comment with your opinion on the games I covered and/or the content of this article. 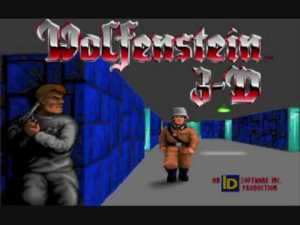 So, most of the times DooM is considered to be the first “real” 3D shooter. Which isn’t true. Wolfenstein came earlier.

I actually finished this game on the GBA. The only two negatives off that version are a lack of a map and no music. For the rest, it’s a really nice port of the game to play on the go.

I recently started to play it on PC, thanks to Steam. And with the music, I’m not really enjoying it that much honestly. The lack of music actually added to the creepy atmosphere. You are trying to escape a nazi prison.

On the other hand, I could see where people are coming from. A soundtrack like that could motivate you to finish the game and try to escape successfully.  It’s all up to your own preference.

The expansion pack/sequel were amazing as well. While I haven’t beaten those games, I’m really excited to see what it throws next at me.

One of my most favorite shooters from the ’90. As I explained in my introduction, this game is one that I adore.

I’m not really sure what the story is behind this game, but to be frankly honest, I don’t really care. The concept is just extremely fun. While I adore stories in my games, to the extent that I sometimes don’t play games that lack a story, this game is a big exception.

I used to play the demo over and over again. Once I got caught in school since I slipped in a computer lab just to play this game and show it to some friends. Man, the teachers were pissed at me. Yet, it gave me great memories.

It was one of those games that my parents didn’t want to see me play, since I discovered it when I was around 10 years old. Shooters aren’t meant for those ages. So, yeah.

It’s also the game that introduced me to the interesting world of cheating. I was stuck in a level, and I looked up online what I should do next. When I read a walkthrough, I mostly read the part where I’m at, and I read a part of the solution. That way I still feel I have beaten the game on my own.

But at the bottom of the walkthrough, there was a section called “cheats”. My young mind couldn’t resist after reading it and trying it out in game. Now-a-days, I rarely cheat. Only when I have beaten a game to mess around with it.

I heard rumors on the play ground about this game. We are in the late ’90 where computers barely got into the educational system. The rumor was that a kid saw a teacher play some Duke Nukem.

As a kid, I was into Pokémon. When they explained and tried to convince me that it was a shooter and it was really cool, I actually didn’t really care.

It was only later that I realized what I missed out on. An amazing shooter with, now outdated, one liners that still get a smile on my face. My favorite is one of the most famous ones. Finish the quote when you know how it ends.

Yet, the truth is that I haven’t finished any Duke game to date. I have played a lot of them, but I play it at those times when I’m waiting between two big releases. Never a great idea, is it not?

Alright, I might have picked out three of the more popular old-school 3D shooters. Yet, those are the ones I grew up with.

Old-school 3D schooters have such an amazing charm to them. With hidden passages and secrets, they are something different. Rarely, I see games copy the formula today. A game where not every wall is solid and where you get a score card if you killed all the enemies in a certain stage, if you found all the secrets and things like that.

I have played more 3D shooters than the three I talked about. It’s just that those three are the ones I have the most fond memories off. Maybe one day I might write a follow-up article to this one where I talk about some different old school 3D shooters.

The thing is, I would love to review these games, yet I feel that I’m not the right person for that. I focus more on adventure, puzzle and story driven games. And I haven’t seen a lot of story driven shooters. I do know they exist, but I haven’t played them.

In any case, I think I’m going to wrap up this article right here. I hope you enjoyed reading it and my apologies for not writing an article for two weeks. Thankfully a buddy of mine actually wrote some articles in my place to give you guys something to read. Thanks man, they were nice reads.

Before I ramble on, it might be possible that in the future you will see an article of one of these games where I take a more in-depth look in to these games. So stay tuned. ~

Hello again ladies and gentlemen we are back after a long break for podcasting. The BSP has been through some changes some of which you will find out about as the season continues but do not worry the show should be back to a regular schedule. This weeks Podcast featured our a New member to the Button Smashers Family, a awesome bloke by the name of NekoJonez.  Neko is a New writer with the BSB and is a capable gamer you can expect to read some great articles from him in the future.  I will like to thank both my co-hosts Shellz and Rai for their continued epicness as well as Neko and the rest of the Button Smashers editing and Viewer Family.

This weeks topics cover steam and the new found support it is receiving from unexpected third parties, as well as custom maid 3-D and Nintendo’s Region lock stance. Ok stop reading this already and listen to the podcast