A meme clone. That’s what I think about this game. But is it a good clone? Let’s first try and say what a meme is. Before I get grumpy about it. Yes, this cat can get grumpy. Extremely grumpy. And that’s good. The Grumpy Cat enjoys being grumpy. But will you enjoy his game? Let’s find out in this game quicky on his Worst Game. And as usual, feel free to leave a comment with your opinion on the content of this article and/or the game in the comment section down below.

Let’s start this time with the negative points of the game.

This is a pretty minor complaint, but the button to go to another world with another section of mini-games should really be placed with the buttons at the bottom.

The “pass and play” feature is interesting, but can be played in single-player? There should also be more options for this mode like which mini-game set you to want to appear.

There is no way to move the moved mini-games to the original position in the room. Expect from dragging them yourself.

You can disable ads, but with ads, you can earn an extra life if you used them all during the mini-games. 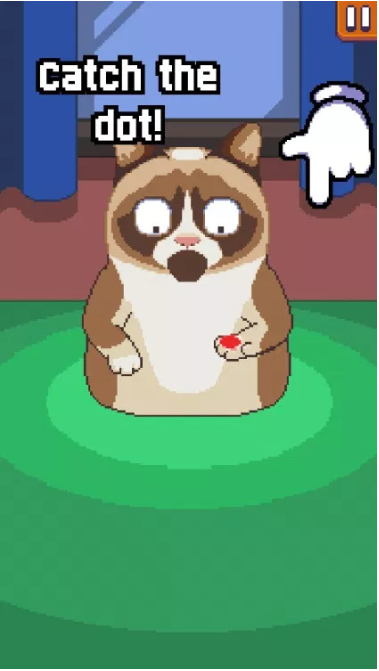 If you have ever played WarioWare Inc. games, you will feel right at home with this game. This game is a clone of that game. And let me tell you, an amazing clone at that.

In this game, you have to complete various mini-games as the Grumpy Cat. If you beat 3 or so in a row, you earn coins.

With those coins, play a slot machine where you either unlock a new mini-game or an extra heart.

You get an extra heart if you grab a mini-game you already unlocked. This heart counts as an additional attempt you can do at the mini-games.

You play the mini-games in random order. If you succeed, you get closer to your coin goal. If you fail, you lose a heart. If you lose them all, you fail and you have to restart from the beginning. Well, from the first price.

It’s a bit tricky to explain on paper, but it explains itself when you are playing the game. The game is really addictive. There aren’t a lot of mini-games I truly dislike. They are all fast and simple tasks that don’t require a lot of thinking but faster relaxes and sharp thinking.

Together with amazing visuals, animations and music; this game is a joy to play. I’m so glad that this game isn’t overloaded with ads. This adds to the enjoyment of the game quite a lot.

You can earn coins easily, but not too easy that you unlock a heart or a mini-game without any challenge. The longer you keep your winning streak up, the faster the mini-games become and the less time you have to beat them.

The game uses this meme quite well. It doesn’t shove it in your throat but uses it to make an interesting game compilation in the theme of the meme. You can use macro images to share your score around.

In total, there are 5 areas with each around 12 cats. That makes for 60 mini-games. The replay value of this game is through the roof as well. And the best of all is, this game is free.

Currently, I’m halfway the 2nd world and I’m highly enjoying myself. It’s addictive and I can’t wait to play it some more. In any case, it’s time for the conclusion.

In most cases, clones of existing formulas get a bad reputation. But, I think that this game is worthy of all the praise it’s getting in the Android Play Store. I really had to look for negatives to fill this article.

This game is an excellent time waster and a fun one to play. I even bought some micro-transactions to support the developer since they are implemented so well. You don’t HAVE to buy them, the game gives you enough coins to work with to keep it enjoyable.

My high score is 150 at the moment of writing, I’m curious if you guys will be able to beat it easily.

In any case, I recommend this game to everybody. Give it a look, it’s one of the better Android games I have played this year. I can’t wait to hear what you guys & girls think about it.

That’s everything I wanted to say about this game. Thank you so much for reading this article and I hope you enjoyed reading it as much as I enjoyed writing it. I hope to be able to welcome you in another article but until then, take care and have a great rest of your day.

So, one day on a garage sale, I saw this game. Since one of the very first games I ever played was Tarzan on the PC, I had to have this. I enjoyed this game quite a lot. And now, after all those years, I still have the same cartridge and the instruction booklet. I’m quite happy that I still have it since I have fond memories of it. Now, I have never finished this game since I couldn’t get passed the tiger battle as a kid. That’s why I’m writing a first impression. Anyways, enough stalling, let’s dive right into this game and let’s take a look at it. As usual, feel free to leave a comment on the game and or the content of this article. 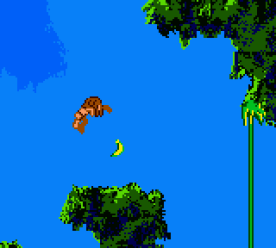 The story in this game is amazing. They made it work on the Gameboy Color! They follow the movie quite perfect. The levels and stages are designed around some amazing scenes of the movie. As a kid, I watched that movie a lot.

While the characters don’t have a lot of development in the game, I still enjoyed this story quite a lot. I’m so glad that they know what the gameboy color was capable of doing.

The game is surprisingly longer then you would think. This game consists out of 23 stages. Which is quite long for a movie game. It’s actually quite good too. This game is a platformer, but not in your traditional sense. You need to collect a certain amount of banana’s before you can advance to the next stage. The amount of banana’s you need to collect are shown when you start the level.

You don’t always play as Tarzan, there are levels as Tuck… but…

… There is barely any variation between the characters. They all play the same. Apart from Tuck’s hitbox being slightly bigger then Tarzan’s.

While the controls are really solid, the jump animation is a bit broken. Sometimes the jumps, well, don’t work. You can’t grab a ledge you see clearly in front of you or you clip right through the edge.

I don’t know it was my copy or not, but the sound was messed up. The music had like a missing line of melody. The noise it added was rather annoying.

A disappointment was that you couldn’t multiplayer the hide and seek mode. You had to pass your gameboy to your friend after you had hidden one of the characters. That was a major let down for me. Thankfully, this allowed me to play this game with my sister. Since we only had one copy of the game back then.

Another annoyance is that the checkpoints aren’t clearly indicated. Suddenly, you get shown that you reached a checkpoint, but it looked like a usual ledge or platform to me at first. Also, if i remember correctly, once taken is always taken.

Oh, don’t get me started on the password system. It’s quite creative by using symbols but why do they have a password system in place for this game? There were games like the Legend of Zelda who showed that they can make a saving system work on the Gameboy color!

So, I have talked about most of the things this game does wrong. But it isn’t that bad. Thankfully, this game has some other good things. The animation blew my mind, and it still does today. What Disney displays here, is just amazing. The game feels tense and nice.

Looking at it now, you could argue that this game has the problem of design over gameplay. I mentioned earlier that some jumps didn’t work correctly. I think the culprit is that the animation is too good.

The difficulty curve is just perfect. While some parts might be a bit unforgiving, I don’t think that is such a bad thing. Do you seriously expect games from that age to be forgiving.

Visually, this game is nice to look at. The game is sometimes a maze… Oh, yeah, I forgot to mention that a map would be nice. But at the other hand, I understand why there isn’t a map. Since you play inside the jungle, which is unmapped terrain in the first place. Also, Tarzan doesn’t know the whole jungle like the back of his hand.

What I don’t understand, and I can’t test it since I don’t have one, is that this game supports the Gameboy Printer. Yes, you can make images and print them. This is wasted potential in my eyes.

Before I wrap up this article, I think I should talk a bit more about the controls. Since there isn’t any tutorial, I liked it that you can find out what each button does on your own. But, as soon as you play, you will understand that this isn’t the best choice. You’ll have to play that in order to understand it. Otherwise I ruined each surprise.

Anyways, let’s wrap up this first impression here. I almost wanted to start the conclusion as I was writing a review. But I haven’t beaten this game, so I can’t write a review. Anyways, I think this game deserves a play. It isn’t perfect, but it’s good. It isn’t polished, but it’s fun.

Thanks for reading and I hope you enjoyed this article. I wish you happy holidays and I look forward to seeing you guys soon. Since the Gameboy and Gameboy Color month will still go in January. I had a way more busy time then I expected, so I couldn’t write enough articles as I wanted for this theme. That’s why I decided that. But anyways~ Take care!