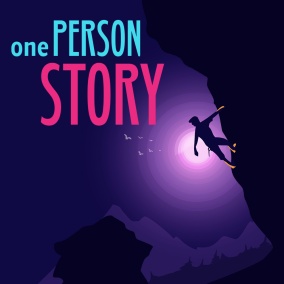 Just like the title of this game, this blog is mostly a one-person story. Most of the articles you can read on this blog are written by NekoJonez, now with that said, I think it’s high time we focus on the game that this article is going to be about. It’s One Person Story by Lampogolovii Leric and ported to the Nintendo Switch by Drageus Games, who provided me a review code for free for this review. This article will have me 100% honest opinion of that game and feel free to leave your opinion about the game in the comment section down below about the content of this article and/or the game.

This game is a puzzle game where you have to guide a square through a pathway. The only control you have is switching between two states of the level. While there isn’t a lot of interaction with the game, the game is rather calming and relaxing to play. It’s a perfect game to wind down or to relax.

Visually, the game is pretty basic but pretty nice to look at. The visuals don’t get too much more involved than what you see in the screenshots but it does the job perfectly. It adds to the atmosphere and the relaxing feeling of the game.

Together with that, you have rather calming music and sound effects. The audiovisual presentation has been nailed in this game. It’s a joy to play and listen too. The music doesn’t restart between levels, which is a great plus. I have seen games that have a similar price point that makes that mistake.

The UI and options menu is just perfect. While you have only one other language to play around with, you can adjust the music and sound effects. The is no way to enable or disable the voice acting, but that’s no big deal. Since the voice acting is pretty decent. I’m able to overlook the fact that there is only one other language in this game, which is strangely enough: Russian. Adding too many different languages would increase the scope of the game and the amount of work as well.

Now, there isn’t a lot of story in this game. It tells the story of how life is. The moments when life is painful, joyful, blissful, annoying, irritating… Losing friends and working together. It’s quite relatable even when my life is far from the same as yours.

It’s amazing to see that this game barely needs any time to load. Thanks to that, you can easily restart a level when you died. You restart right away like in games like Super Meat Boy. 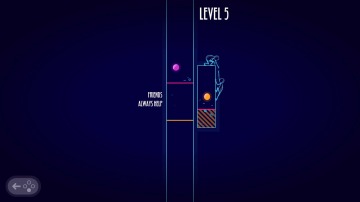 Now, this game is a rather pleasant game but I don’t think that the Switch is the correct platform for this game. This game is rather repetitive and it would be better suited for the mobile market.

That said, the game also introduces unique mechanics that would be quite interesting for more complex puzzles, but the developer only chose to use them for one or two levels. After that, new or other mechanics get introduced. There is barely any depth in this game or anything else besides pressing the button to move the obstacles out of the way at the right time.

I’m under the impression that this game could have done so much more with the concept but choose to stay this minimalistic. It stays true to the atmosphere and the feel of the game but the game became repetitive and dull for longer play sessions.

There is a sort of level select in this game but it’s rather limited. You can only choose to start at a chapter. It’s quite unclear when a chapter starts and ends. To make matters worse, when you choose to start at a certain chapter and you leave the level… Well, you are in for a nasty surprise. It overwrote your autosave file! I was at level 33 and I was messing around with the chapter menu for this review. When I choose the beginning; before the level even started, I left the level. Then I choose “Start”, fully expecting that I would be able to resume my level 33 progress. But nope, it started me at the beginning.

I can be pretty short about this, but I find this a minor negative worth mentioning. The credits just list the name of the original creator and then that the port has been created by Drageus Studios. But who developed that port in that studio is unknown.

This is a decent game on the wrong platform. This is an excellent game to play in short bursts since the levels can be solved quickly and easily. It’s a perfect relaxing game to play on the bus to school or on the train to work. But, I don’t think that the Switch audience is the correct audience for it.

The game is just too basic, too repetitive for my liking on the Nintendo Switch and that makes it quite difficult for me to recommend. If you enjoy casual games or games that tell a unique story in an easy way, I think that this game might be right up to your alley.

Personally, I’m glad that I gave this game a chance since this game pleasantly surprised me. But, I’m quite sure that not everybody will be able to tolerate this kind of casual games. Even while the game shows a lot of promise and just needed a bit more mechanics and polish.

And with that said, I have said everything about this game I wanted to say. I want to thank you for taking the time out of your day to reading my blog! I hope you enjoyed reading this article as much as I enjoyed writing it. I hope to be able to welcome you to another one, but until then, have a great rest of your day and take care!