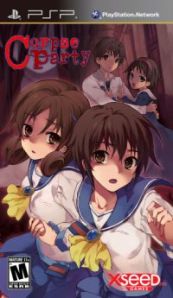 The site of this game – First impressions article

Warning for gamers & parents: This game is for 16 year and older. This game contains a lot of gore, blood and foul language. This game can be extremely creepy. For those who are easily afraid, play with caution.

I started to play several XSeed games before, and I didn’t realize things about this game since I started reviewing it. While researching this game, I learned that this game is a port of a Japanese PC-98 game made by one person. He won a competition with that, nearly 5 million yen. The game is then ported to the PSP a year later. These are signs of a perfect game. But, is it? Or is this game an experiment of that Japanese developer to check if the game is ready for western releases? It’s obvious from my first impression article that I liked this game an awful lot. Now that I finished the main story line, it’s time to give this a proper and full review. Is this game truly worth the praise I gave it? Or is the game now going to fall flat on its face? Let’s dive into Corpse Party. 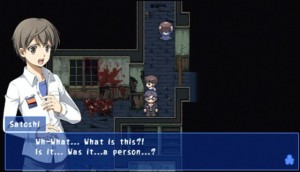 It has been quite some time since I got scared from a video game. Horror games are usually a no-go for me. It contains jump-scares and cheap tricks for scaring you. Games like 999 and Virtue’s Last Reward are major exceptions to that rule.

But I wanted to change that one night and I booted up this game, just before I went to sleep, and I started to play this game with earphones in. And I am glad that I did. Like I said in previous articles, I love myself a good story. And this story really drew me in.

The game is also based on a manga. And I now want to read the manga, to see how good the recreated it. If the manga or the game was first, it isn’t clear to me, I can’t tell.

But this story made me gasp, be silent and got all my attention. The pacing is just perfect. The game is creepy. Very creepy, but it doesn’t overdo the creepiness at any point. The game is creepy if you read the text. The point here is that the writing is extremely well done.

What adds to the game is the voice-acting. The voice acting is where I think this game shines. The Japanese voices really add to the story and make you feel the emotion that they tried to show. Also, the sound of the voices matches the characters displayed on the screen quite well, and I didn’t have any character where I would use another voice.

So, the story is extremely well done. And it really gets thrilling. Plot twists are around every corner. Sadly enough, it’s obvious sometimes what the fate of some characters will be but how slow or how fast it goes down really makes the game unpredictable.

The gameplay caught me off guard. I’m quite surprised how many visual novel games have such unique gameplay.

Your goal is to escape a cursed school and find your classmates and teacher. But, at that cursed school something extremely terrible happened. And something is there to stop your progress. That’s all I can tell you without spoiling the story too much.

The game has 5 chapters. The length of each chapter continues to grow larger. With the amazing finale with over a 2-hour playtime if you don’t get stuck anywhere.

There is a twist. The game has multiple endings in each chapter. And these can be triggered by one wrong move. This makes the game difficult to play. This game won’t hold your hand, and you fell a sense of reward if you finish a chapter. There are points that give you hints but overall, it will be all up to you.

There is one major flaw with the gameplay though. The save system. I didn’t like it one bit. You can save by using candles placed all over the map. But some are so far out that when you get a wrong end, you get frustrated. Also, you can save your system data, which means you save the tags you found, and the game also saves that you achieved a certain wrong ending. Which can get confusing. There is also a save feature that you can only use once. If you load that save file, the save deletes itself after loading. This isn’t such a great feature. For a good save file system, Virtue’s Last Reward got it right.

The music and sound are extremely well done. The music does what’s supposed to do. For some players, it can feel a bit out of place but for me, it actually worked. I really gave me that Virtue’s Last Reward vibe and really got me hooked. If I can buy the album somewhere, I certainly will.

Although, on very rare occasions you can make the music glitch out and not play. And some parts don’t have music. But this is so nitpick.

The sound effects, something I am always very strict about, well-made me zip my review mouth. Really, they are good. Everything sounds like it’s supposed to sound, and it doesn’t have any sound effects too much or too little. They got it right with this game.

Graphically, this game looks dated. And is this a bad thing? Not at all. If you compare it with how it was in the PC-98 version the game got quite a big improvement in the graphics. But I love how they didn’t make the graphics become “too new”. It still has that feel of the original games without being too “ugly” for the graphic lovers. The characters look nice and the location of the game is lovely. But, there is one flaw in the graphic department.

The animation isn’t all that great. Lines where bridges need to come, walking in less then 5 frames, some characters seem to slide over the scene instead of walk. It feels extremely basic. It doesn’t take you out of the experience, but it really brings the game down in my opinion. It’s a big missed opportunity.

Before I forget, this game also got the amount of gameplay and story quite right. There are parts where you need to go through large chunks of text, but you get a lengthy part to play too.

There are also 10 additional chapters. I think you can unlock them by getting the wrong ends or collecting certain tags. I haven’t played these yet, but it surely adds to the replay value.

And that’s about all I can say about this game, let’s go on to the conclusion.

+ The music is one of the best I have heard in a while.

+ The voice acting really adds to the game.

+ It will truly challenge your skills.

I barely score games a full 100. And this game got close. The game is really well-made and got me into gaming once more. I was slowly growing out of gaming and wanting to review and write again. Yet, this game made me change my mind.

The story is unique, doesn’t exploit the usual clichés and takes twists and turns without getting too complex. The music is great, and the voice acting adds to the game. I can’t repeat it enough.

If you play this game in the dark or not, it’s up to you. But pay attention, it will draw you in and hold you there for as long as you can play the game.

Apart from the major flaw of the animation and the bad save features, this game feels flawless. Leave in the comments what you think of this game.