Back in late 2015, I wrote an article on Bioshock. Then, in middle of 2016, I wrote my review of Bioshock Infinite. Now, today I want to talk about the 2nd game in the series, Bioshock 2. It’s no secret that I love the Bioshock series. It’s one of my favorite game series. Weirdly enough, this game is pretty well received by the press, yet some Bioshock fans and gamers hate this game. Now, in this review, I’ll tell you my honest opinion. Is this game good or is it bad? So, let’s go to Rapture again to try and crack this case. As usual, feel free to leave a comment with your opinion on the game and/or the content of the article.

8 years after the events of Bioshock, Subject Delta is woken up by little sisters. You thought that all little sisters were saved in the original Bioshock? Well, some things happened and now, you play the role of Subject Delta and you have to save the day. Not only that, you are a Big Daddy without a Little Sister.

This time, the plot is quite different from the original Bioshock. Personally, I think it’s well written. It touches on some subjects that make the story quite interesting. There is also a section where you play through the eyes of a little sister. This was a great idea. It made the setting of Bioshock more real to me.

The voice acting was, to be honest, hit or miss. There were moments that the actors delivered the line perfectly. But some lines could have been directed better. In those moments, the voice acting missed the soul of the character or the game. But, this problem might be because, like many others, I compare it to the original Bioshock. The voice acting in that game was exceptional.

The biggest issue with the story is that it’s bland at some points. I remember the introduction and the ending part of Bioshock 2. But, I don’t remember a lot of the middle section of the game, in terms of the story that is.

A bit more of Rapture 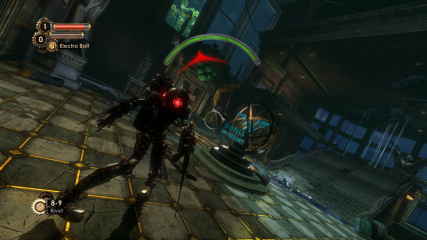 In this game, you discover a bit more of Rapture. You visit locations that you haven’t visited in the first game. Some locations are quite memorable. Yet, like I said before in this review, I don’t always remember what happened in those sections of the story.

One thing I don’t remember is multiplayer. Simply because I haven’t played any match online. But, when I read on the Bioshock Wiki, it sounds interesting. The only thing remember is that there aren’t a lot of players online though.

The animations in the game look amazing. The animation quality of the original Bioshock has returned and still looks as great as ever in this game. If it works that is. What I mean here is that sometimes, the animation bugged out for me and repeated three or four times before ending. Especially when the Splicers opened a door with a blow torch. In various occasions, the animation kept playing where it ended.

Overall, the visual presentation is pretty great. If you can stand the occasional visual glitch, that is. I especially love the design of the Big Sisters. This is a new type of enemy that you encounter in this game. They are pretty scary enemies to deal with since they are even more powerful than the Big Daddy’s. They can hurt you pretty bad.

If you want to beat this game, you will have to give or take 15 hours of game time. If you rush this game, you get 11 hours. This game has some replay value since you can explore various areas for missed tonics and plasmids.

Gameplay-wise, this game plays very similarly to the first Bioshock.  This game is a shooter as well. You will have various tonics at your disposal to play around with. There is also a new gameplay section in this game. Since you play as a Big Daddy, you can drop off your Little Sister at “an angel”. At this moment, you drop off your Little Sister while she collects ADAM. Then this game turns into a “defend the point” shooter. A lot of enemies come in various locations and attack you. If they reach the girl, she doesn’t continue to gather the ADAM. I think this would have been better if you had the possibility of losing your little sister then. That would make this section tenser.

You are a Big Daddy now

You have to press a button while the arrow is in the green section to continue hacking the machine. The issue I have with it is that the landing areas get so small, it gets very hard. I don’t have the best reflexes or rhythm and I tripped more alarms than necessary.

In this game, you also play with a lot of new weapons compared to the original game. Of course, you are a Big Daddy in this title.  The same counts of plasmids and tonics. I loved the “Hypnotize” and “Electro Shock” plasmids a lot. I have used them the most.

The “Decoy” plasmid was pretty handy as well in the sections where you needed to protect your Little Sister. Switching between plasmids and weapons is pretty great. Like the controls of this game. I didn’t have any issues with them.

Something I didn’t need to complain about was the UI of this game. Every option was easy to find and everything that needed to be displayed was displayed. You can also disable parts of the UI if you want a more immersive experience.

The difficulty curve in this game is pretty good. There were some sections that were pretty tense, but I enjoyed the gameplay a lot. While the adventure itself might be short, there are so many different ways to kill your enemies making it a somewhat unique experience each playthrough. You can also research Little Sisters after you killed the accompanying Big Daddy.

Sadly enough, the whole ride isn’t enjoyable. Some moments of the gameplay are quite boring. There are sections where you need to go from point A to B under water. I hated those parts since they felt as filler gameplay. But, I can understand the inclusion for two reasons.

One, the add to the character of a Big Daddy. You saw them repairing broken parts of Rapture in the original game in the ocean.

Two, they can be used as what developers call a “Loading Gate”. These moments give the game time to unload the old part of the game and load in the new part of the game. This is a trick to save resources.

The soundtrack of this game is pretty decent. Personally, I’m not a big fan of the music from the time period that Bioshock takes place in, but the themes played during the combat and exploration sections are lovely.

The sound-effects of this game are pretty well done as well. I played this game with some gaming headphones and I have to say, that they really helped to immerse me into the game. Thanks to the sound design, I jumped out of my skin quite a few times when I didn’t see an enemy coming or when I was battling with a Big Sister.

Also, this game got a DLC with one additional story. It’s called Minerva’s Den. This DLC adds a 5-hour campaign to the main game and it’s pretty decent. I have seen and played worse DLC’s. I haven’t completely beaten it yet, but I’m near the end of the DLC. If you are planning to buy and play this game; I highly recommend that you buy the DLC as well. You will get more out of your game.

That said, I have said everything I wanted to say about this game. It’s time to get to the conclusion.

-Sometimes the game can be pretty buggy. Mostly the animations suffer from this.

-The voice acting is not good.

-Parts of the story aren’t memorable, which is a shame since it’s an interesting story.

-The multiplayer is removed in the remaster.

+ Longer than your typical shooter.

Is Bioshock 2 a bad game? Not in my opinion. Let me explain it this way, Bioshock 2 isn’t like Half Life 2. The sequel isn’t better than the original game.

Sidenote: let me be clear with calling Half Life 2 better than Half Life 1, I hear more praise for the second game compared to the first. That’s all.

Bioshock 2 has problems, it lacks polish in some areas and you can hear that in the voice acting and see that in the various minor bugs left in the game. On the Wikipedia article, you can read an interesting development history of this game. The developers had quite a big task ahead of them. How are you going to follow up the amazing Bioshock?

I personally think that this game is an amazing sequel that has some flaws. If you enjoyed Bioshock, there is a chance you might enjoy the sequel. Give it a chance, since this game has some amazing moments. And if you want the best visual experience, you can play the remastered version. About the remastered version, Drakulus wrote a pretty interesting article on the remaster of the original. You can read it here.

That’s everything for this review folks! I hope you enjoyed reading it as much as I enjoyed writing it. Thank you for reading and I hope to be able to welcome you in another article. But until then, take care and have a great rest of your day.